I detest Orange Hitler as much, if not more, than anybody, and I’m continually depressed about our shameful national situation. But Kathy Griffin is a complete a-hole!!! And she must be missing a synapse or two (or three or four,) to think that showing a bloodied decapitated head of anybody is funny!!! Or even okay.

And, yes, I know that other sickos have displayed effigies of wonderful President Obama hanging or burning, but those actions are as vile as Kathy Griffin’s is. Since when do two wrongs make a right? The creeps who gleefully showed those effigies of Obama are just as bad as Griffin, (or she’s just as bad as they are—whichever way you word it is correct,) but do we Orange Hitler opposers have to not only sink to their level, but surpass them into hell??? 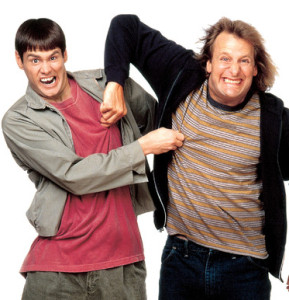 I hate to insult the Dumb and Dumber guys, because Kathy Griffin and Orange Hitler are so much less bright than they are, but it’s the only image I could come up with for this article. My other thought was two devils, but I could find only cute ones!

Kathy Griffin and Orange Hitler actually have a lot in common. What is it about such insecure, physically-unattractive people, with horrible voices, to not recognize how disgusting they are. Or perhaps they do, and that’s why they have visions of their own imagined grandeur. I can’t figure out what could possibly be in their pea-sized brains.

By the way, I don’t for one moment think that Orange Hitler’s son saw the pictures of his father’s beheaded visage and was traumatized by the experience, but that doesn’t matter–nobody wants to see images like that, no matter of whom they are!!!!!!!!!

That his young son was upset, true or not, is not even close to the point of how evil what she did is. And it’s not even that she thought to do something hateful to begin with. I’m sure millions of normal Americans have wished him ill. The point is that Griffin thought that it’s acceptable to not only post that picture, but to come up with the concept, go to the trouble of having the offensive prop made, and hire a photographer to take the pictures!!! That’s a lot to go through, without having the brains to stop the process at any point along the way! That entire scenario showed us that she’s as mentally ill as Orange Hitler is!

And, no, “comedy” is not even close to a defense for so egregious an offense. As someone who was included in the comedy world when I was doing my show, I’m offended that she, and some of her fellow comics, are even using that as an excuse.

Never mind that that poor unfortunate woman has never been funny; this stunt borders on treason. It doesn’t matter that the buffoon man whose “head” she displayed is ruining our country and the world, with some of his acts being treasonous themselves. We are Americans, and we have to respect at least the office of the President.

But Kathy Griffin has never shown respect for anything and anyone. I, for one, am thrilled that we won’t have to listen to her rotten rude remarks on New Year’s Eve anymore. (Yes, I’m aware that no one is forcing us to watch that channel, but CNN is the only station that shows the ball go down in real New York time to us on the West Coast. And, as former East Coasters, Mr. X and I want to see that.) And I will now patronize all the sponsors who have dropped her, even though they were crazy to hire her in the first place!

Kathy Griffin’s latest cry that Trump has ruined her life is even more insane than her stunt to begin with! No, asshat—you ruined your own life!!! And that you don’t see that is just more proof of your unstableness. (She said, “I don’t think I will have a career after this.” Duh!!! She added, “I’m going to be honest, he broke me.” Just how did he, or anyone else, break her? She did it all to herself!!!)

I always wish that Orange Hitler would just go away. And now he should take Kathy Griffin with him!!! They’re actually two peas in pod. Or insane asylum, which is where they should both wind-up.

[Note: I didn’t post any photos of her offense, nor of her, nor of him, here because they’re so repulsive, both inside and out. Instead, I just went with generic pix, just to have something visual to accompany my rant.)