Now that I stared tweeting, [note: don’t get excited yet—I did it just once, and I’ll announce when I’m doing it steadily,] I had thought of tweeting live, but I was due at the opening of Poor Behavior at the Taper, and I didn’t want to do it after the fact, when I watched it back on DVR, (which I wish all those idiots would stop calling “TiVo.” Some do have Tivo, but most do not.)   When my ride cancelled, I got to stay home and watch the Emmys live with Mr. X, who laughs at most of my bon mots, even when they’re not intended to be amusing, but I couldn’t wrap my head around tweeting that quickly. So here are just a few of my thoughts as the show went along:

And, conversely, sixty-four-year-old James Woods, though now short and pudgy, looked at least ten years younger than he is because he has normal color hair.

What was Julianna Margulies wearing?  What a horrible dress.  And what stupid dialog the writers gave her…”I’m the funniest person in the room.” Whassup with that???

We were happy for Julie Bowen, who won for her role Modern Family that we thought often went unnoticed among the rest of the stand-out cast. But why would she expose her flat, bony chest in that two times horrible dress?

The bit done by Will Arnett and Zooey Deschanel was brutally unfunny.  And it was about comedy writing!

Doesn’t Zooey sound like Kermit The Frog?  Think about it.

I’m always amazed at Sophia Vergara‘s body!!!  And she always knows just how to stand up and sell it. And not in an obnoxious way. I’m always impressed with her.

The six girls going up on stage for their nominations was hysterical, though I could tell it was planned and not spontaneous.

Although I couldn’t get past even ten minutes of her sitcom, Melissa McCarthy is very likable.

Laura Linney‘s dress was the most perfect of the night, and exactly what I would wear to one of these awards shows. She featured her excellent legs, while hiding any stomach, arm, and chest problems. And the satin stripe up the sides made it a “tuxedo” dress that was appropriate for the black-tie occasion. Brilliant piece of fashion styling!

The stupid group of “resident” singers were depressing, on oh so many levels. We didn’t even know who they were! Why would Oscar nominee Taraji P. Henson lower herself like that? And the dresses on those women, especially the chubby redhead, were beyond unflattering. They were like what a bitchy bride would make her bridesmaids wear.

What the writers behind John Stewart‘s Daily Show acceptors were carrying on took away from the cleverly written short acceptance bit.

I didn’t really know what was going on in the “musical” section with Andy Samberg and company.  I finally figured it out, but it wasn’t worth it. 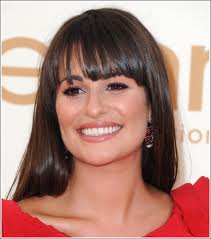 I was so happy for the older woman character actress, Margo Martindale, who won an award for Justified. It gives the rest of us hope.

When they went to a commercial one time, Chuck‘s Zachary Levi picking his nose and putting it on the guy in front of him was gross, not amusing.  Maybe good for a high school reel, but not national television. 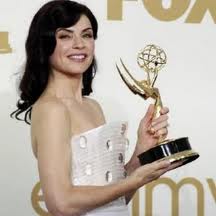 I don't think she really cares about such things, but Julianna Margulies' hair was a wreck!

What was Julianna Margulies’ hair doing when she accepted her award???  She looked like she just stepped out of the shower.  And not a sexy one.  She needs a tan and lipstick, too.

When Julian Fellowes, the creator of winner Downton Abbey, finished accepting, I exclaimed, “Now, that’s a speech!!!”  He didn’t risk being “grandiloquent,” (he said he didn’t want to run the risk of being that,) only because no one knows what that means.

Paula Abdul‘s giant head looked super-imposed on her tiny body, especially in the skinny tux, standing next to Jane Lynch, who did an admirable job of hosting, btw, which I’m sure didn’t surprise any of us. 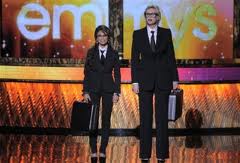 See what I mean about Paula? And how do these two females' bodies conaian the same organs???

The In Memoriam section worked out fine, in the end, but when the guy singers started walking down the aisle singing, it looked like an inappropriate bit.

Anna Torv was the only truly not-full-of-shit person there. What a lovely lady she is, which does come across on Fringe.

Best speech of all came from Mildred Pierce winner, the charming Guy Pearce. Leave it to an Aussie.

Creepy William H. Macy looked even worse than ever, which I didn’t think could be possible.  He looked like one of the Caveman from the Geico commercials.  And the pretentious schmatah he had around his neck has been out of even pretentious style for at least twenty years.  I wish his co-presenter had told him that John Voight called.

And why would he and Maria Bello, who had done some movie together back in the day, say how good it was to see each other when they got onstage?! They walked out together, for goodness sake! Couldn’t they have said it backstage privately? Totally phony.

So, over all, it was a really good show. It moved along, most people were nice enough, there were some fun surprises, and nothing was really painful or unfair.

So, hopefully, tomorrow we’ll move on to what really matters in life—bashing the new cast of Dancing With The Stars!!!