Trending
You are at:Home»HOLIDAYS»HOLIDAY: HAPPY FATHER’S DAY 2015
By Karen Salkin on June 19, 2015 · HOLIDAYS

When I was younger–much, much younger–I often thought that I’d marry someone who already had kids. It’s hard for me to remember those feelings very well now, (because I sooo wouldn’t want to be stuck with kids, nor do I believe in marriage,) but I do understand it, for me.

I thought that good fathers were so attractive. Still do, I guess. Perhaps that’s due to my own not-very-close relationship with my sire. 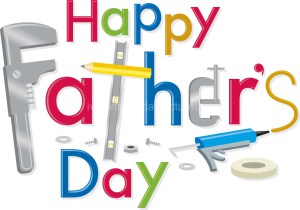 The weird thing about that is that all my friends who know me from only LA think that he and I were very close. They saw me be only wonderful to him when my parents visited, even surprising him with a birthday celebration when he was on my show! But, I guess that’s how life goes. I guess he realized that he should have appreciated me all along, and I forgave his harshness of my younger days. (Wow–this column took a weird turn, didn’t it? It’s not what I meant to be writing about at all! But I think I’ll just go with it.)

As a matter of fact, even though my father never seemed to like me much when I was growing up, (even though, seriously, I was the model child,) in my adult life, all of his pals in both Brooklyn and Aspen, (including my mother,) told me that I was his favorite child! I still couldn’t believe it until he himself confirmed it for me on his deathbed. He even pulled me to him one day and thanked me for everything I’ve always done for him, and for his family! He said that I was the only child who had ever done anything for them, rather than them doing everything for everyone else! I was shocked! (I knew all that, of course, but I could not believe that he had taken note of it!) 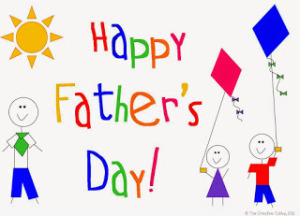 This looks just like the drawings I’ve done all my life!

Wow, what a turnaround from my childhood days that was. When he passed, my mother gave me all the little journals he had kept since before they were even married. She knew I’d be interested in reading them since he and I were the only people she knew who wrote in diaries. I read them all from start to finish (which was easy because, unlike moi, he didn’t wrote a tome every night!) I didn’t even realize that I was looking for a clue of how he felt about me when I was younger, until I came across the nicest thing he wrote about me when I was nineteen, and already living on my own in Los Angeles. I had been on one of my many visits home to Brooklyn, and after it, my parents took me to the airport to see me off, back to LA. That night, he wrote simply, “Sad to see the pest leave.” Triumph!

Okay, so now that I, very unexpectedly, shared all of that with you, the main topic was supposed it be how attractive good young fathers are. But I guess it wound-up being about how it’s never too late to repair relationships with your own patriarch in your adult life.

So, no matter what category of father you are in, (as long as it’s not Deadbeat Dad,) I wish you a very Happy Father’s Day!