Trending
You are at:Home»HEALTH»HEALTH: SKIN CANCER SURGERY, WITH A WARNING FOR YOU ALL!
By Karen Salkin on April 20, 2018 · HEALTH, KAREN'S RANTS

SKIN CANCER SURGERY, WITH A WARNING FOR YOU ALL!

So here’s what’s been happening with me: I just had skin cancer surgery the other day. On my face!!! For the second time in my life. The previous time, it was on my nose, (which you may have noticed over the years,) but this time I was a tad luckier—it was on my forehead. And I wear bangs, (which is why I consider myself luckier.) Also, I had a better surgeon this time. A much better surgeon!

I tell you about the surgery not to elicit sympathy from you guys, but to warn all of you to do regular skin checks. It’s so important! And the easiest medical thing you can do for yourself.  You just go to the dermatologist, and he or she looks over your whole body. If there’s something you’re worried about, just point it out extra, because you know your own body better than a stranger does! (Duh.)

Skin cancer can happen to anybody at any time. I haven’t even been in the sun for over a decade, and yet, here I am. But I’m one of the lucky ones because I had some help taking care of the situation. 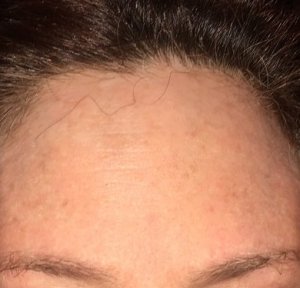 My intact forehead before surgery. That minuscule dot in the bottom middle is where the offending cancer was. Photo by Mr. X.

Here’s my journey: About a month ago, I had a facial with Marc Edward in Hollywood. He asked me what a tiny dot on my forehead was, and I answered that it was nothing—it had been there for only a few days, and was smaller than a pin head. Marc noticed something else on my collarbone, and made me promise to see a skin doctor that week.

Never one to break a promise (maybe because my best friend is my Froggy, so I heed the words of the amphibian in The Frog Prince, who insists, “a promise is a promise,” at least in the version of the story that I read when I was little, which has stuck with me forever,) I did just that, a mere three days later.  The doc said the one on my collarbone was nothing bad, but took one look at the forehead dot and said we had to biopsy it. (But he didn’t notice it on his own; I remembered to point it out to him. So Marc Edward may have literally saved my life!)

And that’s what I’m saying, people! You have to look-out for yourself! I often notice spots here and there on my pals, especially former (and, unfortunately, current,) sun-worshippers.  But the few times I’ve mentioned it to them, they get offended. Why, I can’t understand, but some people like to stick their heads in the sand. If someone tells me something, especially about health, I try to heed their advice. None of us see ourselves as others do, so perhaps they’re correct. We all want our friends to let us know if we have spinach in our teeth, so why not be grateful when they suggest that you might have a potentially life-threatening spot on your face? I don’t get it.

So here’s the second half of my medical advice, which you should also heed. (I was planning on just suggesting skin checks, but I’m on a roll!) You have got to stick up for yourself in all medical situations!!! Just about every doctor alive is looking out for his or her self, which took me until recently to realize. Most of them are concerned for their bank accounts and careers, not their patients. (Unless they’re some noble country doctor, straight out of a Hallmark movie.) So you really have to be vigilant, about everything! Here are two skin cancer examples: 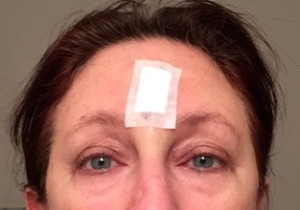 Right after this recent surgery. (I know I look awful, but I have to publish these pix to show you all to not sit in the sun anymore!) That scar on my nose is from the awful Mohs surgery I had a decade ago! Photo by Karen Salkin.

When I had skin cancer on my nose, over a decade ago, and was told that I needed Mohs* surgery, I was savvy enough to ask if I should have a plastic surgeon in the room, to close up the incision nicely. But my surgeon, whom I didn’t know, (but was the partner of my basic dermatologist, whom I trusted,) said absolutely not. I’ve been living with that bad decision to listen to him ever since. Of course I should have had a plastic surgeon do the work!  The Mohs doc either didn’t want a more skilled guy looking over his shoulder, or there was money involved that he didn’t want to share. Either way, I’m the one who suffered, (and have been doing so ever since!) 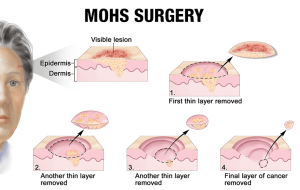 *[Note: Mohs is where they cut away as little as possible, since they have no idea how deep the cancer goes, and look at it under the microscope right then and there. If they got it all with that one layer slice, they close you up. If not, they go down one more layer, and so on until all the cancer is gone. It’s sort-of brutal, if you need more than one layer removed, but it’s all over in one fell swoop.]

So, here it is, all these years later, and I have the same dermatologist. (But not the same Mohs guy, of course.) When he told me that I need this new surgery, I knew enough to assume it would be Mohs again. But my doc said no—he’d just cut it out and basically hope that he got it all!

The wound, immediately after surgery. Photo by Heather at the surgeon’s office.

Thank goodness I had time to think that over for a few days, and was brave enough to call him on it. I asked how that would work. He said that after he removes what he thinks should be enough, he’ll send it out to a lab, and then we’d find-out if he got it all. If not, then he’d send me to a Mohs guy.  In shock, I asked, “So I may have to get cut open twice???” He must have thought better of it when we hung-up, or realized with whom he was dealing, because he called me back ten minutes later and said that he was sending me to a specific Mohs surgeon instead of doing it the way he had been planning to. 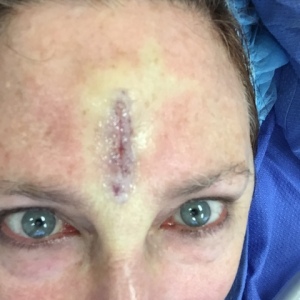 Right after the stitches were put in on the second day of the process. Photo by Karen Salkin.

As I ruminated on why he would possibly not do the right thing to begin with, I realized why; either he wanted to make the money (this is not a cheap procedure,) or he was afraid that I’d then switch to this new dermatologist for everything. Either way, he was not looking out for me, despite knowing each other for decades and actually being friends back in the day, when we both had time.

If a friend and/or a trusted medical professional can treat you this way, trust me, you have to look out for yourself!!! Period. Dot, dash, end of story!

So, please have your skin, all of it, checked right away. And be your own advocate in every health care situation! No need to thank me. You all taking care of yourselves is seriously all I need.