Trending
You are at:Home»HEALTH»HEALTH: ASTHMA
By Karen Salkin on May 28, 2014 · HEALTH

[Note: I had begun writing this column way back in January, after an incident, because I wanted to educate people about asthma. But then I forgot about it, and let it sit in a folder. But recently, something came up about places I’d be able to stay if I ever really do start traveling outside my comfort zones of just my own houses in New York and Los Angeles; even good hotels (especially in Vegas) are suspect as to if they ever had guests who smoked in a room I might get. So, the topic is fresh in my mind again. And it’s time to share.] 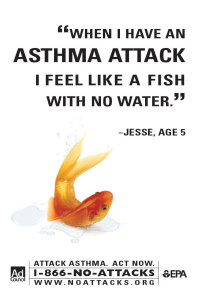 The ad that you should take heed of.

Asthma is a pretty serious malady that, unfortunately, I have. I didn’t have it as a kid; it began only about a dozen years ago, when I was a hip-hop club promoter. (I don’t think that had anything to do with me acquiring the condition. I’m just using it as a time reference.) That means that I’ll have it for the rest of my life.

I used to be embarrassed about it, and I was afraid that my hipster club pals would make fun of me. I never wanted anyone to know. And whenever I had an asthma attack in front of anyone, I apologized up and down for scaring them.

But I recently had a bad one in front of a new grown-up pal, and she really freaked-out. She didn’t know what to do for me, and I know she felt helpless.

So, since so many people seem to have asthma nowadays, I figured maybe I’d do all us asthmatics a favor, and educate as many of you as I can.

As common as I think it is, having an asthma attack is one of the scariest things you can experience. Have you ever seen those billboard ads that state, “When I have an asthma attack, I feel like a fish with no water”? None of us can know what a fish with no water really feels like, but if they feel like we do when we can’t breathe, it’s horrific. I’ve actually stood on the furniture during an attack, hoping that there is more air up there. It’s not a rational thing to do, but you see your whole life passing in front of you, and your body just reacts in a desperate manner.

By the way, I’m not here to complain; I’m here to tell you what to do to help your friends, or even strangers, if you witness them in these dire circumstances. First I’ll tell you what not to do. Of course, I have a little parable about that scenario.

I was at a little theater here in Los Angeles a few years ago, waiting for the play I was reviewing to start. My asthma is triggered by mainly cats, tobacco, and very many fragrances, so I try my best to not be near any of those. Fragrances are the hardest to avoid, especially in audiences, but I try my best. In this particular case, a guy walked in, who had clearly just smoked a cigarette, and sat right in front of me. And that was a small theater, mind you. I went to my purse to take out my life-saving inhaler to have it handy, but realized with horror that I had left it in a different purse. [Sidebar: I now have several inhalers, in purses, cars, and houses. So, I guess you can teach an old dog new tricks!] So I told the friend I was with, whom I’ll call Ruby for this story, how to proceed if something should happen to me. I specifically told her to not take me to a hospital, because I would probably be brain-dead by the time we got there from the lack of oxygen. (My best friend in life actually died from an asthma attack some years ago because it took the paramedics seventeen minutes to get to her. That’s when I realized how serious asthma really is, and that it’s nothing to be embarrassed about.)

I told Ruby, several times as a matter of fact, that if I started having an attack because of the tobacco smell, to ask the PR guy, with whom we were very friendly, to make an announcement to the small audience that we needed an albuterol inhaler. (So many people are in the same position I am nowadays that I just knew that there would be it least one other person there who would have one.)

She then asked me where the closest hospital was, even though I had just specifically told her not to take me to one, so I reiterated, strongly this time, that absolutely under no circumstances was she to take me to a hospital. The albuterol spray works within a minute on me, and I consider it one of the greatest inventions ever. I’m so grateful for it. I repeated all my instructions again, and then asked myself what kind of idiot I am to still sit in that audience when I could feel the attack coming on in my lungs. 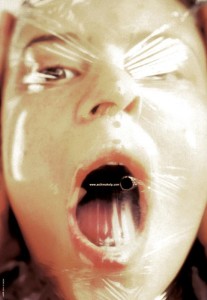 This is an excellent depiction of what an asthma attack feels like.

So we opted to leave before the play even began, (partly for me, partly to not make a fuss in an audience when it could easily be avoided by me just leaving,) but as we got outside, the attack started. As scared as I was, I knew that I had given her the proper instructions, so I expected a spray in my hand in a matter of minutes, which meant that I would be fine a minute after that. To my horror, Ruby stood outside with me, screaming wildly that someone needed to call 911 and get me an ambulance. With the little breath I had available at that time, I begged her to do what I had already told her to do several times, to no avail.

Thank God the theater manager had come outside to find out why we were leaving, and as soon as he saw what was happening, he asked me if I had my inhaler with me. When I gasped out a “no,” he told me to hold on a sec, and ran back into the theater. Within probably only ten seconds, he was back outside with a stranger’s inhaler for me, which most likely saved my life.

So the lesson from this story is that if you see someone having an attack–friend, foe, or stranger–scream out for someone to hand you their albuterol spray. Unless you have an ambulance right nearby, who can get them to a hospital in a few minutes, that’s your only course of action.

And more importantly than that, stop wearing fragrances out in public! And stop smoking cigarettes, period. If you don’t want to save your own life, please at least think of the other people you could be harming. I realize that cigarette smokers are mainly a selfish lot, but if you’re a smoker yourself, please try to be better than that. Just imagine if someone lost his or her life because you wouldn’t heed all the warnings. If that doesn’t make you quit, you’re a lost cause.