[Note: I visited six pre-Oscars Gifting Suites this year. (Well, actually, it was eight, but two are not worth telling you about!) As always, each one gets its own write-up, in the order that I visited them. This is the fifth of them, so please make sure to check back tomorrow, and to look at all the previous Oscars columns, as well, to learn about all the fabulous-ness. (And after that, there will be two wonderful stand-alone goodie bags to give you the scoops on, as well!)] 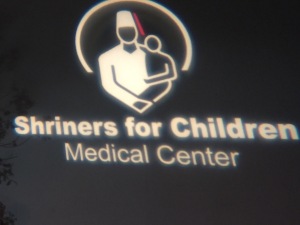 This fun two-part event returned once again to the fabulous Beverly Hilton Hotel in—guess where—Beverly Hills, of course! Debbie Durkin threw it in conjunction with the Shriners Hospitals for Children–Los Angeles, (who also sponsored the nighttime soiree that I’ll tell you about at the end,) which is known for providing care to every child in need, regardless of their family’s ability to pay. They specialize in orthopedic conditions, prosthetics and orthotics, hand disorders, burn scars, and cleft lip and palate.  www.shcla.org 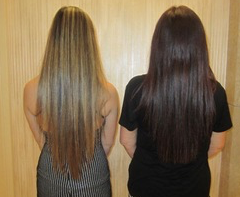 The hair of Karen Salkin and her new teen-age pal, Julia. Guess which is which? Photo by Beverly Hilton staff.

Debbie is always kind enough to assign a helper to each VIP, and this time I hit the jackpot with adorable Julia, a recent transplant from upstate New York. She looked just like I did in my heyday, but much cuter: long straight hair, tight mini-dress, great heels. Only she’s styling much, much younger than I did, for which I give her major props. And she guided me through the suite like a champ. She made the whole event easy-breezy for me, and I really thank her for that.

Debbie is one of the few who knows enough to feed her guests while they are meeting and greeting, so there were plentiful, classy passed hors d’oeuvres all day. I was too busy to eat, save for a few unbelievably delicious grilled shrimp, but the medium-sized hot dogs on sticks were hard to resist!

Now let’s get right to the highlights of the gifts!: 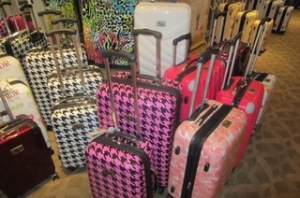 Chariot Travelware—Once again this creative luggage company was the most popular sponsor at any suite this year! Their pieces are downright mouth-watering to me, and there are so many wonderful designs that I don’t know how any guest could choose from among them all! This time, my eye went straight to a giant hard-shell suitcase adorned with a map of the world, while Jordan pointed-out the basic but uber-shiny navy blue ones. I showed one of those to Mr. X later, and even he was wowed by the beauty of it. (And I loved spending a lot of time at the later party with Moon Woo, the head of the company, whose tales of being a jockey are ever so entertaining.) www.chariottravelware.com 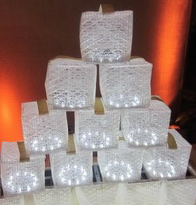 SolarPuff—This recent invention is a beautiful almost-weightless little cube of solar-powered light. That’s interesting enough on its own, but it’s also part of a social campaign called Ten Million Rays of Light. Their “social mission” is to “distribute light in the third world and underdeveloped regions, such as Asia and Sub-Saharan Africa.” To that end, every time someone buys one, the company also sends one to someone in an underserved region. If everyone in this town has a patio or deck they want to make beautiful, they could kill two birds with one stone by using multiple cubes to decorate, which would then give that same number to a person in the world who just needs the cubes to make his or her life a little easier. If that isn’t a win-win, I don’t know what is! www.solight-design.com 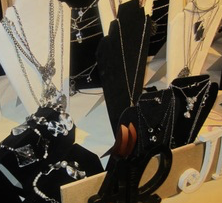 AR Pro Designs Jewelry—Being a proud owner of several pieces from this darling jewelry designer, I was thrilled to see her back here. I can’t believe that so many different styles and designs come from one mind! And she’s always kind enough to let each guest choose his or her own gift, guiding them along the way with stories about each one. (Stories about the jewelry items, not the guests themselves, of course, although I’m sure she must have some of those by now, too. I sure do!) www.arprodesigns.com 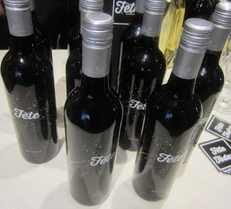 Fete Wine—Because I had met them at a previous event of Debbie’s, I was already familiar with this wine, whose name means “party,” for those of you who don’t know. The couple whose company it is told me that most people don’t know, but I’m proud to say that my readers just have to be familiar with that word by now, since I use it regularly. My friend, Flo, (who came to that later party with me,) was enamored with both the wine and that couple. She told me the wine is “fruity, robust, and smooth.” And that “Justin and Becky’s story and attitude about life are great: Choose joy every day.” And I guess that’s just what Fete wine-imbibers are doing by drinking it! www.fetetoday.com

Armani Wells—The owner of this men’s boutique in LA doubled at the suite as a sponsor and a celeb. It’s Claudia Wells, who played Jennifer Parker in the iconic film Back To The Future. I’m sure her presence is in high demand at autograph events everywhere, but instead, this day she chose to give her presents at this suite! (See what I did there?) Besides chatting-up the guests, who were happy to see her, this pretty redhead was giving them gift certificates to her store. You know all the men will be heading right over there, some even for the shirts! www.armaniwells.com 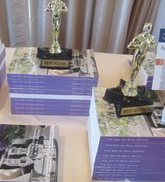 Art of Real Estate—I had recently met this realtor and author, Debbi DiMaggio, elsewhere, so it was fun to re-connect with her at this suite. And this time I found-out that she’s actually a relative of the iconic New York Yankee (and Marilyn Monroe spouse,) Joe DiMaggio!!! OMG! I was planning on reading her book anyway, but now I’ll really be digging into it! www.debbidimaggio.com

IT Cosmetics—This cosmetics company had make-up artists on site all day, doing touch-ups. Or even the whole shebang, if someone was brave enough to show up totally bare-faced, (which you know I was not!) Then guests left with a gift bag of their products, so they could re-create part of the looks for themselves. www.itcosmetics.com 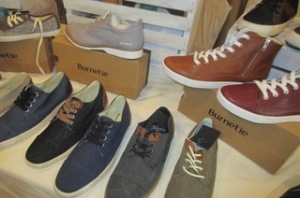 Burnetie Shoes–This footwear company’s collection of fun sneakers and boots just keeps getting better all the time. Many were on display at the suite, but guests had even more styles to choose from because they each received a gift certificate to go on-line and make a choice after perusing them all! www.burnetieshoes.com

To be gorgeous for the party they were throwing later that evening, I was planning on getting a spray-tan at the end of my stay, courtesy of Sugar and Bronzed, (two names cat-callers have used on me, by the way.) But I ran out of time, so I will check them out at their Beverly Hills location at another time, (which will be soon, I hope.) www.sugaredandbronzed.com

The photo booth pix of Karen Salkin and Flo Selfman.

I had such a lovely time at the suite that, even though, (after being on the go at events since literally the crack of dawn,) I was more exhausted than you can imagine, I returned to the Hilton for Debbie’s evening soiree, with my above mentioned pal, Flo, in tow. (No, I did not mean for that to rhyme! It just did.)

We began the night by taking pix of us in the photo booth, which is always fun. I hadn’t realized they had little fake Oscars on hand to use as a photo prop, or else you would have seen me “accepting” one on all my social media. (In case you don’t already follow me, here are my “handles”: Twitter: @MajorCelebrity and Facebook Fan Page: It’s Not About Me TV.) 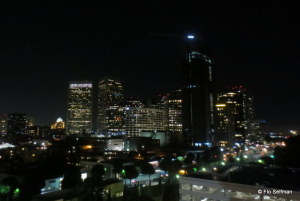 They were serving gorgeous tidbits, of course, and, always a sign of a good party, the shrimp was flowing! But, sadly, I’m not allowed to eat most of it anymore, so a very kind waitress slipped me a trio of plain mini turkey burgers! Believe me, I was a grateful girl. Flo enjoyed the mini tuna tacos and the giant coconut shrimp, along with the very fresh Bloody Mary she got from the happening bar area on the beautiful patio, where the views were just stunning! 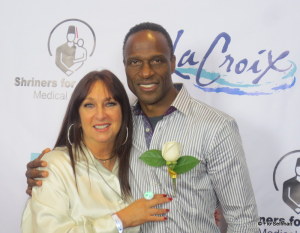 There was also an indoor bar, and that’s where I spent a lot of the night with one of my favorite athletes of all time, former Chicago Bear (and LA Raider, so yay us,) the handsome Willie Gault. It’s odd that we were at the bar because neither of us drinks! I’ve rarely met another soul who, like I, does not drink, and never has. That was even more refreshing to learn of than the juice combos we were drinking that night!

Flo spent a lot of time chatting with the Fete wine peeps, and she was fascinated by their story, (which I referenced in their section, above.) And she enjoyed drinking their wine, too, of course!

Everyone left the party with a little goodie bag of fun items, adding to the wonderful time that was had by all.