My friends, Thomas and Anita, and I went to the hippest, most happening Tribeca Film Festival event ever! It was at a venue I’ve always wanted to go to since it opened here in Brooklyn almost five years ago, and I was thrilled to have had that opportunity, courtesy of American Express, on what is my last stay at my Brooklyn home. 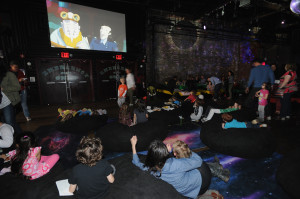 Brooklyn Bowl was the place to be on the penultimate day of the festival, trust me. It put us in such a good mood that we decided to go over the bridge to Tribeca after, for the Family Fun Day, which was still a distant second to the American Express event.

We got to the bowling alley in time to get situated with sustenance before a screening of the animated film, Moon Man, began. It was so fun to see a whole bunch of cute kids sitting in oversized beanbag chairs, staring up at the giant screens. 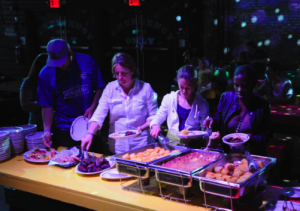 This was a generous party, not only because of the open bar, but food-wise, as well. There were buffets set-up in a few areas of the spacious bowling alley/party space. On the menu was hummus and pita, chicken wings with sauces, two kinds of corn on the cob (plain and fancy,) mac n cheese, two kinds of fries, (see the corn notation,) and non-breaded chicken nuggets. Who could need more?

But the pièce de résistance, to me and mine, was the brownies for dessert. They were perhaps the best ones I’ve ever had! I could have eaten an entire platter by my lonesome!

Most of the guests also bowled, but my broken back, and Anita’s growing pregnancy, prevented us from participating. But I loved the playing area, and hope to be back when I’m all healed-up. 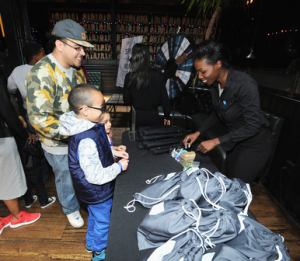 The “wheel of gifts.” Photo by Bryan Bedder/Getty Images for American Express.

The fun actually began before one laced-up the bowling shoes or ate a bite or drank a sip; as we entered, we each got to spin a wheel of prizes. Thomas and I each won a gift card, and independently, we both chose the one for Whole Foods because it came in a tiny grocery bag! I’m glad I’m not the only crazy one. But Anita hit the jackpot, though, by winning an entire American Express gift pack, complete with a bag of coffee and a tin of gourmet popcorn.

Throw in a group of lovely press reps, and you have a bunch of happy party-goers celebrating a fabulous time in hip Williamsburg.