Trending
You are at:Home»EVENTS»EVENT/MOVIE REVIEW: OPENING NIGHT OF A WRINKLE IN TIME AT THE EL CAPITAN
By Karen Salkin on March 12, 2018 · EVENTS, MOVIE REVIEWS

OPENING NIGHT OF A WRINKLE IN TIME AT THE EL CAPITAN

This will tell you just how much I love the El Capitan theatre in Hollywood—I went there to see a movie with Oprah Winfrey in it! As many of you know, I am soooo not a fan of hers, but that theatre makes every film screening such a fun event that when I was invited to the opening of A Wrinkle in Time there, I could not help myself! I’m happy for any excuse to visit my favorite theatre in Los Angeles. Every showing is an extravaganza! 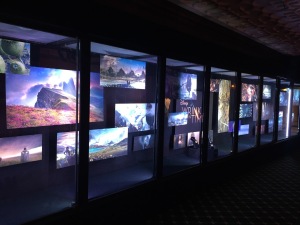 The photo display on the lower floor of the El Capitan. Photo by Karen Salkin.

And my time at the El Capitan was very well-spent. I always feel a part of history just entering the premises.

I’ll review the movie itself for you some other time, (except to wonder right now just how many nose jobs Oprah has had at this point. Maybe she should have also had a mustache-ectomy while she was at it, because it’s hard to look at that hairy lip on the El Capitan’s big, beautiful screen!!!) For now, I just want to tell you about all the fun to be had at the El Capitan.  Angelenos should not see this movie anywhere else!

And here’s the only other little clue I’m going to give you now about the film itself—if you were a fan of the TV show Lost, you should enjoy A Wrinkle in Time. It reminded me of that series over and over again. 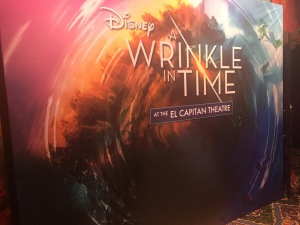 One of the backdrops in the main lobby in front of which the audience members can take their own pix. Photo by Karen Salkin.

That brings me to the main reasons to see A Wrinkle in Time, at all, (because I’ve never been a fan of the original crazy story the movie is based on.) Those reasons are the spectacular special effects and all-encompassing sound, which won’t be better anywhere else.  The El Capitan uses Dolby Vision Laser Projection and Dolby Atmos Sound Technology, which cannot be beaten for a movie like this.

And it’s never just about the film at this theatre—it’s the overall experience. They always give us many extras. Make sure to get there early to go to the lower level to see the exhibit of costumes and photos from this film. (No worries if you’re a bit tardy that day; you can see them afterwards, too.) And there are a couple of colorful backdrops on the main floor for you to take your own pictures in front of. 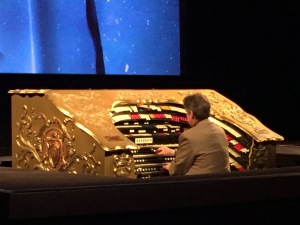 Then, inside the actual auditorium, a wonderful musician, Ed Vodika, plays a panoply of Disney tunes on their famous Mighty Wurlitzer Organ for about a half hour before the show begins. Actually, that entertainment is a big part of the show, too! My music-fan friend would have been happy to just listen to him for the next two hours! (And make sure to look up and around at all the special visual touches in the theatre while enjoying the music.)

That same pal posed a few questions about El Capitan’s history, so I directed her to the Upper Balcony Lobby of the theatre, where a fabulous Wall of Fame pictorial tells you everything you could possibly want to know about the place. (I’m sure the helpful and informative staff will be happy to answer your inquiries, as well.)

As we exited on opening night, we each received an A Wrinkle in Time poster, and that perk will continue for the duration of the film’s run, while supplies last. (So maybe go see it very soon!) 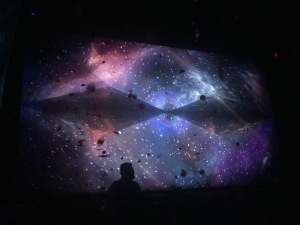 I may not want to ruin this surprise for you guys, but, obviously, that guy in front of the screen did not feel the same! Photo by Karen Salkin.

I don’t want to ruin any surprises for you, but right after the previews, the audience is treated to an all-new kaleidoscope show on the screen, with a couple of special treats at the end of it. (Without giving it away, let me just put it this way–I was thrilled to see a beachball not as a warning on my computer!)

Speaking of the previews, the one of the Christopher Robin movie gave me chills. In a good way. The little bits they showed us reminded me of Peter Pan coming back for Wendy and finding-out that she grew up. That ending always makes me cry just thinking about it. I hate that Christopher Robin is a grown-up in this new film, but it looks so touching that I can’t wait to see it. And at the El Capitan, of course!!! Where else?