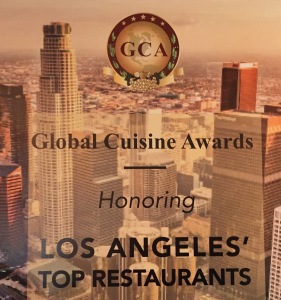 As many of you know, I started-out in the media biz by reviewing restaurants, which is still my first passion. As my former television show, Karen’s Restaurant Revue, gained in popularity, I branched-out to tell my viewers about others aspects of what people refer to as my “glamorous life,” but I kept dining critiquing as the one of paramount importance.

And now, with ItsNotAboutMe.TV, my Dining section has had to share the spotlight with about forty other categories. But what’s an in-demand journo to do? I can’t ignore everything else for the one topic, so, alas, enlightening you about LA’s eateries is not my raison d’être anymore.

So, when I was invited to the recent Global Cuisine Awards at the near-by Beverly Hilton Hotel in Beverly Hills, I was happy to participate. I’ve let my eatery acumen take a slight dive, so the prospect of finding-out just which restaurants in this town are considered to be award-worthy was very appealing. 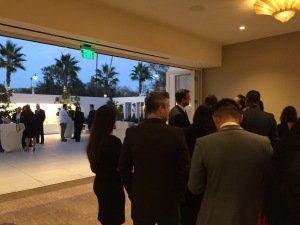 The setting for the cocktail hour. Photo by Karen Salkin.

The awards dinner was held in conjunction with the Global Foods Summit that was hosted at the same venue earlier in the day. I was sorry to miss that happening, but a bon vivette such as moi can do only so many events in one day! And, of course, I chose the combo of “awards” and “dinner!”

The evening began with a cocktail hour in the indoor-outdoor space in front of the hotel’s Beverly Ballroom. I have to laud the super-accommodating staff, especially our favorite waiter, Abel. It’s always a pleasure to go to events at the Hilton because of their ever-attentive personnel. 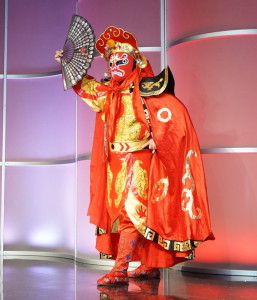 As soon as we were all seated in the ballroom, the show started-off with a bang; I feel bad for anyone who was late and missed it. We were treated to a spectacular performance by brightly-costumed Chinese “face-changer,” Bian Lian. He entertained us by deftly changing face masks right in front of our eyes. Even though we were looking right at him, we could not see him switch them! It was truly amazing. He needs to go on America’s Got Talent, so I can slow the picture down to figure-out just what he’s doing. (But I have a feeling that even then I’d be at a loss.)

Then came the awards themselves, which were peppered throughout the evening, so that we could eat in-between. I believe that the majority of awards were for pan-Asian eateries, but a few other cuisines were spoken for, as well. Going back to what I was saying at the top of this column–that nowadays, with so many other things to write about in this e-zine, I’m not as knowledgable about Los Angeles restaurants as I once was–I definitely felt it that night; the only two winners that I’ve ever dined at are Mr. Chow and Spago. And there were only a couple of others I had ever even heard of! So, it was fun to be made aware of their existences and prominence in this city. 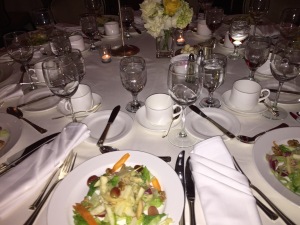 It’s a good thing that we were eating a sumptuous dinner because otherwise the giant screen shots of food (that went along with the award presentations) would have been too much for us to bear!

But the dinner we were feasting on was perfect! We began with a salad that was both delicious and healthful, as it was chockfull of sliced apples and walnuts. Then we moved on to an entree of short ribs and lobster cakes, with polenta and veggies on the side. I don’t eat lobster and I’m not allowed to eat red meat for health reasons, but those short ribs had my name on them, so I did venture to take a few bites. And OMG—it was heavenly!!! I was impressed that they were also prepared for any vegetarians in the crowd, who each received a plate of just bigger versions of the polenta and vegetables. 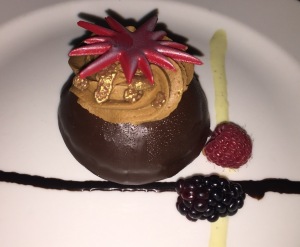 The dessert. Photo by Karen Salkin.

But the beautiful chocolate bombe dessert was the pièce de résistance! I noticed that everyone at my table devoured theirs! And, of course, the wine flowed all night.

There was only one tad confusing aspect to the entire evening: The big screens at the front of the stage proclaimed this to be the “2018” awards, but the host kept saying they were the “2017” ones. So your guess is as good as mine. I guess we’ll just have to wait and see what they say it is next year!

And I’ll try to brush up on my LA dining experiences before then, so I can tell you all about them in-depth next year. Maybe I’ll even review some of them before then, as well.

But for now, I send a major “Congrats” to all the winners!