Trending
You are at:Home»EVENTS»EVENT: MEDIA ACCESS AWARDS 2012
By Karen Salkin on October 12, 2012 · EVENTS

There are always so many frivolous events to write (and read) about, that it cleansed my soul to write about this one! I feel privileged to have been even a speck of sand at Wednesday morning’s Media Access Awards, held at the Beverly Hilton Hotel.

I used to attend when it was a black tie dinner, but I truly enjoyed it so much more as an early morning breakfast; it was more intimate this way, which made me feel that every single person who was in attendance cared about the subject. (And I believe we all did.)

The awards themselves honor “individuals in the entertainment and broadcast industries for their efforts in promoting awareness of the disability experience, accessibility for people with disabilities, and the accurate depiction of characters with disabilities.” It’s master-minded by a collaboration of people from SAG-AFTRA, the Writers Guild, Producers Guild, and Casting Society of America, and includes awards such as the Christopher Reeve Acting Scholarship and RJ Mitte Diversity Award. 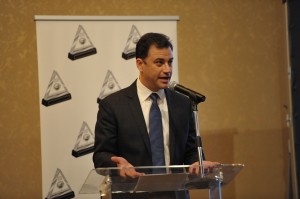 This most worthwhile event of the year brought out a Who’s Who in the industry. But I was most impressed by host Jimmy Kimmel. What a naturally funny guy he is. I began watching his show a few years ago because of his Dancing With The Stars connection, (both being ABC shows,) and pretty quickly realized he’s a hoot; but this breakfast hosting job of his put me over the top. I can’t laud him enough for the job he did there!

He set exactly the right tone, making easy-going and appropriate jokes about the situation that just about every attendee was in, or had a connection to. It was perfect; he wasn’t making light of it, and was absolutely respectful, yet every bon mot made the entire assemblage guffaw. No one could have done better. It was the most enjoyable hosting gig to watch ever. I mean it.

But I didn’t go there for the many celebs, though I’ll get to those in a minute. As everyone should be, I’ve been concerned for people with disabilities since I was a little girl. So, when I was doing my television show, Karen’s Restaurant Revue, and was asked to be one of the celebrities at Special Olympics, I jumped at the chance. (I’m so grateful to KRR for affording me that opportunity.) And I loved it so much that I returned year after year. My first experience there was really rough for me; I cried all the time. But as I got more involved with it, especially with one of the groups, Exceptional Children’s Foundation, the pain melted away and was replaced by the pleasure of witnessing the joy and happiness of all the participants. (I think I need Kimmel to write this paragraph for me.) I realized that the Special Olympians were much happier and more well-adjusted than the celebrities were! (When one actor was complaining that he hadn’t had a series for a long while, one of the kids overheard and told him, “You had a job, didn’t you? You got paid, didn’t you? Just be happy!”) (Okay, I’m crying as I wrote that.)

Then, as my acting career was taking off, I got a part on Life Goes On, the show that starred Chris Burke as a regular teen-ager with Downs Syndrome, and was ground-breaking. I was involved with that show for awhile, (for more than my small re-curring role, which had to be given up anyway, but that’s another story) and I have always lauded ABC for bringing a situation like that to the public’s attention.

Which brings us to the current Media Access Awards. The show itself moved right along, with excellent presenters and honorees. (You can read all the details in the link at the bottom of this column.)

But, besides the superb performance of Jimmy Kimmel, there were a few other highlights for me. Knowing how shallow Hollywood can be, I was overwhelmed by the incredible turn-out at that early hour on a weekday. And most people were dressed-up, which I greatly appreciated.

A fabulous touch for this occasion was the inclusion of signers on-stage, and subtitles on the video presentations. 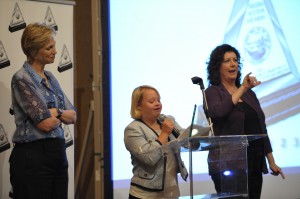 Glee stars Jane Lynch and Lauren Potter, with the signer for the event.

The most touching speech was by Lauren Potter, who plays Becky on Glee. She’s a young actress, who happens to have Downs Syndrome, and she’s been such a fabulous addition to the cast of that show. She’s an excellent comedienne who always makes us laugh. Making her speech even more poignant was the presentation by her co-star, the fabulous Jane Lynch; seeing Jane beaming at Lauren during the latter’s fabulous speech was a heart-warming moment. (I guess they didn’t realize that I was wearing non-waterproof mascara!)

This event had a big celeb turn-out, and I was asked to interview them all, but while I was busy with the assemblage at large, time got away from me. But I was so happy to run into presenter RJ Mitte again. I was pleasantly surprised to discover that this adorable guy from Breaking Bad was happy to see me, too, because we had recently hung-out at Doris Bergman’s gifting suite. Most actor types are too self-involved to remember anyone else, so he really impressed me with his enthusiasm, (which matched mine, even though I’ve never seen that show!) I met his lovely mom, too. (Interesting note: When I first met him, I hadn’t realized that he has cerebral palsy; I looked him up because I thought he was so nice, and was surprised to discover that fact. It’s the reason he was here to present an award named for him.) 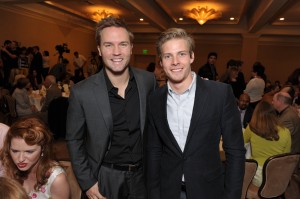 I spent a few minutes chatting with Scott Porter from Hart Of Dixie. I hate asking anyone pat questions, (but you must ask a few at events like this,) so I was really caught off-guard by his very thoughtful answers! You go, boy. (The funny thing is that I couldn’t sleep the night before worrying about which guy, Scott’s character or the other guy on the show, Zoe Hart would choose!!! I said others were shallow, but I didn’t say I wasn’t!) When I asked why he chose to present at the Media Access Awards, in particular, Scott answered, “It’s just such a great event,” and added that, as opposed to other awards shows, which are all just glitz and glamour, this one “sheds some light on inspirational people.” He said that he was “excited to present this award to” The Push Girls because they’re “so inspirational, so winning.” Sweet fellow, as my mother would say!

Speaking of The Push Girls, all I can say is OMG! I don’t watch reality shows, ever, so I wasn’t aware of them. The series follows four beautiful girls, who are all in wheelchairs. (Mr. X had seen a couple of short clips of the show, and didn’t even realize the mobility issues, which says a lot about just how small a part of someone’s life that is.) The clip they showed was wonderful and I think the entire assemblage became fans, (if they weren’t already.) When Kimmel returned to the stage after that presentation, he said, “Well, that makes me hate the Kardashians even more.” Touché!

Almost everyone in this most appreciative audience stayed until the end, which I’ve never seen at an event like this before.

I’m going to sleep right now so I can get a jump on next year’s Media Access Awards breakfast! (OMG—that last word made me realize that I didn’t even write about, or care about, the fare itself! So, how wonderful was this event to make me forget about the food?!)