Even though this Beverly Hills-based film festival is in its eleventh year, it was new to me. I had heard of it before, but have usually been in New York at this time of year. But now that I’m no longer bi-coastal, I figured it was time to pay tribute to my heritage by attending the Opening Night Gala at the Saban Theatre in Beverly Hills. 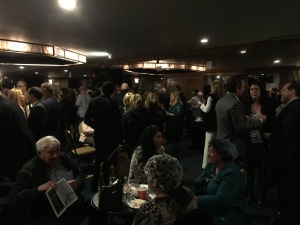 We were entertained right from the get-go. First, by being greeted by so many people I know as I entered, and then by something really amusing that was pointed-out to me by my friend Gary who accompanied me. As we were handed the programs for the entire festival, he noticed a list on the back of them. It was of things that are absolute no-nos for audience members during the screenings. On there, in addition to the usual admonitions to not use cell phones or unwrap candy during the shows, were things like “no whining,” and “no showing pictures of your son the doctor.” So, we were smiling from the start. Make sure you read it if you go to one of the showings. 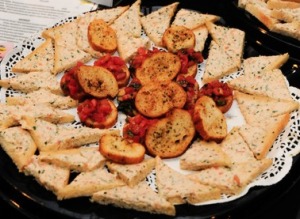 One of the food platters. Photo by Amy Graves.

Let’s go in order of the evening. Because this was the opening night of the Los Angeles Jewish Film Festival, we were treated to a reception as soon as we entered. There were two different sandwich stations. (They were all vegetarian, because I’m sure a big percentage of the assemblage was kosher.  That was thoughtful planning.) And there were several cakes, and a few special treats, like snack bars to enjoy during the film, which was a cute touch. All that was missing was popcorn! (But the Saban is not really a movie theatre, so maybe that’s why no one thought of it.  But there’s always next year! Remember future JFF goers—you read it here first!) 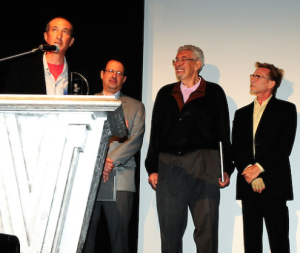 (L-R) A trio of Laemmles, and actor Dennis Christopher. Photo by Amy Graves.

When we adjourned to the auditorium, there were several presentations on stage. The most interesting one was to the Laemmle family, who has owned many movie theatres around town…for the past three-quarters of a century!!! We were treated to a charming little short film of the fam telling their story, and then the whole clan accepted their commendation in person, which was presented to them by the star of the classic film, Breaking Away, Dennis Christopher. (I used to be in love his car when I first came to town as a teen-ager. He had a classic little Metropolitan, and I didn’t even know he was an actor; I just knew he was a guy who had the best taste in automobiles!) 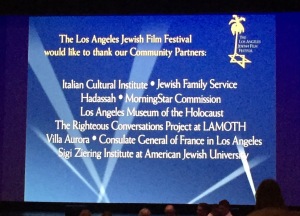 The beautiful screen at the Saban. Photo by Karen Salkin.

Then came the opening night film. In this case, it was two episodes of an Israeli television series, False Flag.  I think this is the only instance during the festival where the screening is a TV show, as opposed to a movie. I have to admit that it was a tad curious choice, but it really worked for the circumstance, because, after everyone had already partied and heard speeches, I think that a shorter entertainment was appreciated by all. And Gary and I really enjoyed the mystery drama. I wish we could see the rest of the episodes in this country!!!

The experience was enhanced by the discovery that the actual screen at the Saban is gorgeous. I never would have guessed that that would be the case in a theatre that features more live shows than it does films.

Two of the celebratory cakes. Photo by Karen Salkin.

Now, as a lover of old films, I’m looking forward to seeing the closing night offering, None Shall Escape, which will play at the Fine Arts Theatre in Beverly Hills. Even though I find it really painful and hard to watch movies about Nazis, I do love an opportunity to see any black-and-white movie on a big screen. And not only is this film from 1943 newly restored, (so it should look great,) but the now 98-year-old star, Marsha Hunt, will be doing the post-screening Q-and-A. How’s that for special?!

For the entire Jewish Film Festival schedule, please go to www.lajfilmfest.org. And hopefully I’ll see some of you on closing night. And next year, as well!!! This may have been my first time attending the worthwhile event, but it certainly won’t be my last!