Trending
You are at:Home»EVENTS»EVENT: HOLIDAYS IN YOUR CAR DRIVE-THRU HOLIDAY LIGHT SHOW
By Karen Salkin on November 30, 2020 · EVENTS

To get an early start on tomorrow being National Christmas Lights Day, here are the scoops about the one SoCal display I went to recently–Holidays In Your Car drive-thru holiday light show at the Ventura Fair Grounds.

The simplest image of the Holidays In Your Car holiday light show, but one of my faves. Photo by Karen Salkin.

I had no idea what to expect, but I knew it would set the holidays off just right for Mr. X and me. And I was thrilled to be invited to a fun event where we wouldn’t have to leave the car and be near other people for even one second!

We arrived at the Fairgrounds early because I had never been there before and I’ve learned from experience to never trust that traffic will be perfect, (but in this case, it totally was!) We checked in at the first entrance, and then waited in our cars for it to get dark. (If you get tix for the first group of the night, at 5PM, just expect to do that, too.) But even that part of the evening was interesting—I appreciated watching the visible-from-the-waiting-area sections of the lights get brighter as the sky darkened!

When it was finally dark enough, we checked in at one more point, where we were told to put our radios on the corresponding station, so we could enjoy holiday tunes as we went along. That’s a great idea, which Mr. X and I were already smart enough to do the second we left our house! Great minds…. But their station is better because…it has no commercials! It’s just pure upbeat music all the way! (And I have a feeling their playlist does not include any downers, such as I’ll Be Home For Christmas and My Grown-up Christmas List, which plunge me into depression every time I hear them.) 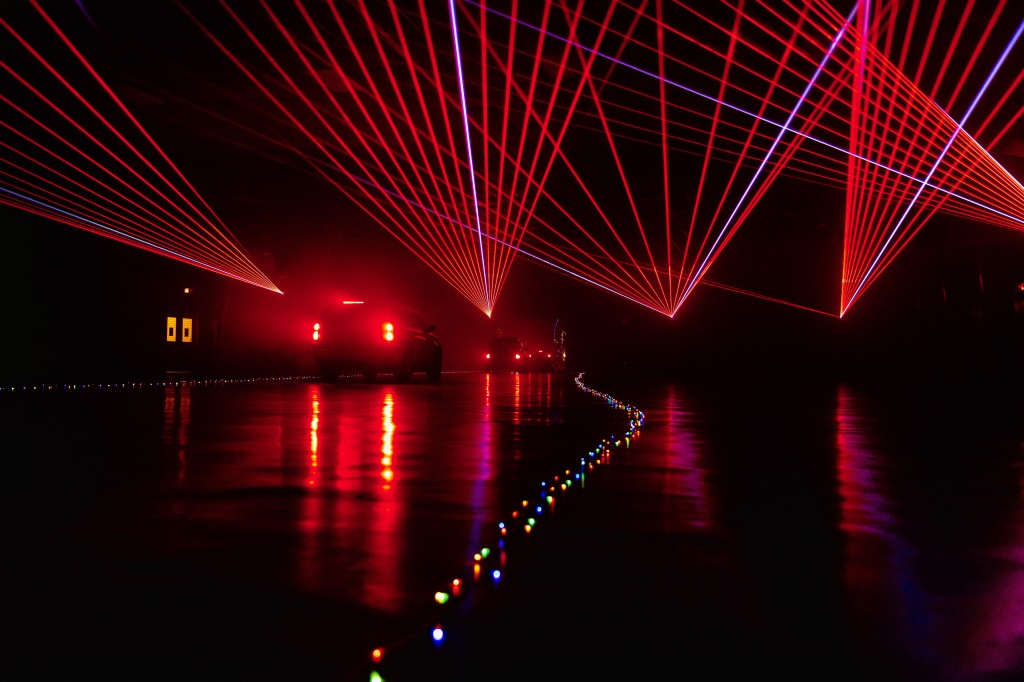 The first part of the light show. Photo courtesy of HIYC, as is the one at the top of the page.

And then you just drive through the exhibit at your own rate! They have you shut your headlights, and go no faster than 5MPH. But here’s a tip–the slower you drive, the longer the enjoyment will last! Mr. X always speeds-up when a car is behind us, thinking he’s being polite to the other driver to not slow him down, but in this case, I really advise everyone to take as much time as you need.

The ride officially begins with an overhead laser light display, which really sets the fun off right.  (I suggest you have your sunroof open before you enter, if you have one.) Many sections have their own little “theme”–one area is mainly red and green, and another features lit-up transportation images, like guys on skis, bicycles, and motorcycles. There’s even a live Santa and Mrs. Claus for you to wave to along the way!

My favorite part was an airport-hanger-size very colorful room that had all different animations, including an entertaining snowman and dancing reindeer.

Mr. X said the whole things is “sweet, cute, interesting, and kids will love it!” He added, “It’s best-suited for the young and the young at heart.” I love that very apt assessment!

And I must laud all the Holidays In Your Car personnel we came in contact with. In addition to the greeters, there are staff members positioned along the way to guide you to the next area, and even one at the exit to remind you to turn your lights back on, and direct you to the freeway or the town, as you leave. And every single one we came in contact with was very pleasant and helpful. That’s always a bonus at any event!

If you live in Ventura, this is a welcome entertainment. If you live someplace where driving to the display could be considered a little road trip, like Los Angeles, you can make a day or evening out of it. Or both!  You can go early and watch the sunset at the beach right across the street from the Fairgrounds. Or maybe look around the nearby town before or after you drive thru the light show, and get a piece of pizza or a taco. (Those two options are available practically right around the corner when you leave the venue.) 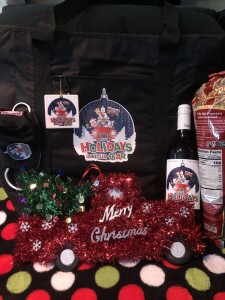 The media swag bag and contents. Photo by Karen Salkin.

Because I attended the press preview, I was lucky enough to receive a lovely goodie bag. The actual waterproof-lined giant tote, with several outer pockets, will come in handy on my next car trip, as will the designer face mask. It also contained a bag of popcorn, a bottle of wine, and a couple of cute Xmas-y things—a commemorative ornament and a big sparkly “car decked-out with a Xmas tree” decoration. All fun.

Actually, the entire day surrounding Holidays In Your Car was fun! I was giddy just getting ready for the experience, even though I wasn’t even leaving the car. I colored and flat-ironed my hair, did my nails, gave myself a mini-facial, put make-up on, came up with colorful casual holiday-esque clothing, and even put on Christmas earrings!  That I even knew where all of that stuff was after eight months in pajamas is pretty shocking in itself!

And this is what doing all that, when no one was going to see me, (except the two people who checked us in through Mr. X’s window, with me wearing a mask and glasses,) reminded me of: When I was little, my two-doors-down neighbor, Angie Ditolla, was the prettiest, most glamorous woman I had ever seen! And boy, could that woman do great eye make-up! Every time she glammed-up for the day, I wide-eyed-edly asked her where she was going, expecting the answer to be that era’s version of the Met Gala. But it was always…the supermarket. (Sound the trombone playing “wah-wah.”) Even at that young age, I could not imagine why anyone would have to look good to go to the market. But, as life has gone on, whenever I flash on Angie, I realize that we all need a reason to spruce ourselves up every now and then.

So, even though no one but Mr. X and those two greeters saw me that night, I thank Holidays In Your Car for giving me a reason to put a little pep in my pandemic-hit step right now. The whole experience really did start my holiday season off just right!

So that you can enjoy the same fun, here’s the link to all the info, including deets for their second location in San Diego: www.holidaysinyourcar.com.