Trending
You are at:Home»EVENTS»EVENT: CHILL AT THE QUEEN MARY
By Karen Salkin on November 29, 2016 · EVENTS

CHILL AT THE QUEEN MARY

For many years, Mr. X and I hosted an intimate Thanksgiving Eve get-together at our house.  (That’s the night before Thanksgiving, in case you never heard of it before; I’m the one who coined the term.)  I billed it as our “Thanksgiving Eve Function,” and then, when I brought it to the hip-hop clubs I was in charge of several years ago, I changed it to “Thanksgiving Eve Bash,” a designation all the L.A. club promoters who have come after me have continued, I’m proud to say. 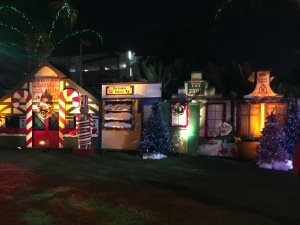 The little Christmas “village” on the way in. Photo by Karen Salkin, as is the one of the entrance to the Alice In Winterland maze, at the top of this page.

This year, I was planning on re-instituting that tradition, after several years off, (our last one was at my Brooklyn abode, in 2012,) but then I got invited to something that sounded like even more more fun than that—the media preview of Chill at the Queen Mary–so I just could not turn that down.  And it was the perfect choice, for that night and any other one this holiday season! After that one visit, I already want to go again!

The organizers made the place look positively dazzling!  The visuals are stunning, and the activities very enjoyable.  The theme of this year’s entertainment is Alice In Winterland, and they did it up right. So, here are the deets on what my friend, Roz, and I experienced on the opening night of Chill. 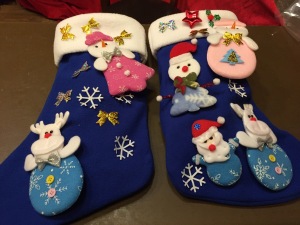 The hand-decorated stockings. Roz’s is on the left, Karen’s on the right. Photo by Karen Salkin.

As we entered the premises, our eyes were greeted by a beautiful little Christmas village.  I thought that was charming, but it just kept getting better.  And better!  Our first stop was at a little cabin where we made our own holiday stockings.  Not knit them, of course, but decorate them.  There were so many adorable, colorful, and merry decorations that it was easy to get creative.  We had a blast doing that activity.  I could have done just that for the next two hours, and called my night a success. (Mine is already up in my house!) 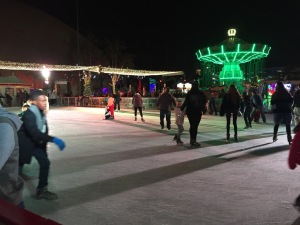 Then we moved over to the private March Hare Hideaways, which are cozy cabanas that surround the ice skating rink.  They’re so comfortable, and feature fake fireplaces, and plush pillows on the couches.  Some of you may know how ice skating-obsessed I am. (As a spectator, definitely not a participant.)  So, it was very enjoyable to sit there and watch everybody else go for a spin (and a fall!,) on the ice. And we got to nibble on some uber-sugary snacks while we did. They actually gave me almost enough oomph to get out on the ice myself! Thankfully, for everyone concerned, I was one bite of cotton candy short. Whew—that was a close one! 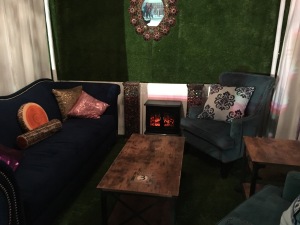 [Note: The cabanas are available for rental for different periods of the day or night. If you do that, with a party of six or more, I suggest you throw your own Mad Hatter’s Tea Party in there, which you must order ahead of your visit. Not only is any tea party wonderful, but this one is actually the most reasonably-priced food item to eat in all of Chill! Afternoon tea (which is what the repast is properly called—not “high tea,”) is usually exorbitant, but here it’s unbelievably affordable. So, I suggest you not miss it.  I just wish that Roz and I had known it before, because my mouth was watering for it; but, sadly, it’s not available for order on the spot.] 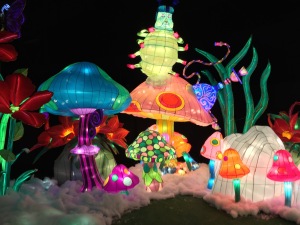 When we were finally able to tear ourselves away from that area, (after a brief stop at the Down The Rabbit Watering Hole—which looked like the lobby of a ski lodge—for some hot chocolate, served by amiable bartender Lance,) we finally got to the main event—Alice in Winterland!  OMG!  It’s absolutely gorgeous!  What it is is a lovely version of a maze, not like the creepy (to me) Halloween ones that scare the bejesus out of you.  It’s 14,000 square feet of pure vibrant gorgeousness!!! 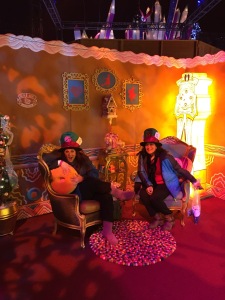 Karen and Roz sitting in Alice’s tea area. Notice Karen trying to take a bite out of the donut pillow!

More than almost anything in life, I love colors and lights, so this was the place for me. I would literally love to live in there! The giant all-lit-up displays, which feature every interesting portion of the classic children’s book, Alice in Wonderland, are downright stunning! The Chill designers did not miss a trick! There is an innovative aspect of this main attraction, which is accessed by the big green Mad Hatter hats that are available at the beginning of the adventure. (I’m assuming that you have to buy them, as you do everything at big amusements such as this one.) You stand on different marked spots along the way, tip your hat, and then you see or hear something special, which is not visible or audible to guests without the head gear. (And then you have the main part of next year’s Halloween costume!) 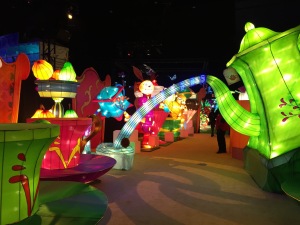 Another part of the incredible maze! Photo by Karen Salkin.

At the end of the maze is a life-sized chess board, right in front of the grown-ups-only Magic Mushroom Martini Bar. Clever way to keep the kinder occupied while the parents head inside for a quick drink!

We exited that area just in time to see the giant Christmas tree being lit by Santa and company. There was even “snow” for the occasion!

When we were done with all that, we stopped by the North Pole Point Stage, which is near the entrance/exit, (and is one of the free attractions at Chill,) to watch two dance acts. (And to finally sit a spell!) We saw the Diamond’s Jewels, which is a Rockettes-esque precision sextet, and then the Un-Birthday Boyz hip-hop crew, (which Mr. X could have been in!) They were both really good, and entertaining. I loved the girls’ silver outfits!!! They’re better than many of the costumes on Dancing With The Stars! 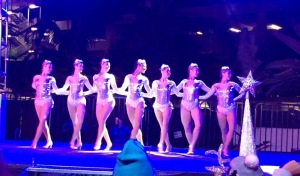 The Rockettes-type act on the performance stage. Photo by Karen Salkin.

There are even more things to do there, which, sadly, we ran out of time for—photos with Santa, a carousel and a couple of other rides, a giant slide, paint ball (like I was going to do that even if I did have the time!,) and story time with hot chocolate.

If you’ve never been there before, you might be surprised that Chill is not on the Queen Mary—rather, it’s in front of it.  (Its official title is “Chill at the Queen Mary,” so you should realize all that going in.) And it’s all outside, so dress warmly.  But that’s actually part of the winter wonderland fun!