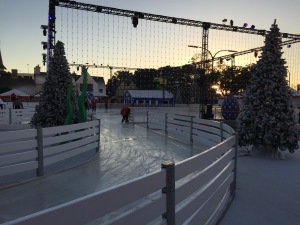 Part of the long ice trail. Photo by Karen Salkin, as is the big pic of the overview of Chill, at the top of this page.

This was my second year in a row attending opening night of Chill at the Queen Mary in Long Beach, and it could not have been more different from last year’s rendition of the same event! And I believe that the Alice-In-Wonderland-themed attraction from then was way different from the ice-house-centric one the year before that! I really enjoy that the Chill powers-that-be give us a unique experience every year, even if we did love the previous one we saw.

This year they brought us the first-ever Ice Adventure Park in this country! I ran into my old pal, Willy Bietak, who told me that his company designed all the ice “rides,” an accomplishment my friend Roz and I were most impressed with. People can ice skate all night, and not just inside the square rink—there’s an ice trail around much of the park! 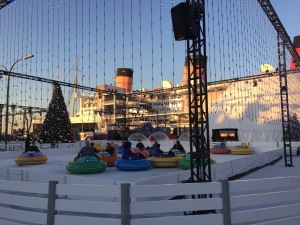 The bumper cars on ice. Photo by Karen Salkin.

There are also several other activities on ice: lit-up bumper cars, a giant slide, and big wheel tricycles, which is the only one we tried. We chose to use the one tandem bike they have because I’m no dummy—that way Roz had to do most of the work!!! [Note: I would have loved to do the bumper cars, as well, because I think my perennially-broken back could have taken the gentle bumping of the rubbery vehicles, but the line was way too long for us busy gals who had other places to go that night.] 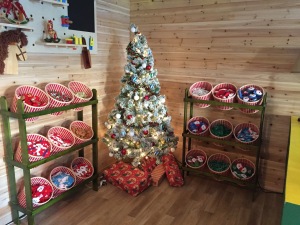 The stocking decorations in the bins. Photo by Karen Salkin.

The way the park is set-up this year is as several different countries. The featured nations are Switzerland, China, Russia, Holland, Germany, and, our favorite–the North Pole! (I know—that last one is not a country, but it’s a magical land, so I’m glad it’s included.) It’s actually the first place you see upon entering the premises, so we stopped in right away. (It’s right across from the zip line that you just know I would never do!)

While in the North Pole, we each decorated a Christmas stocking with adorable little felt Santas, snowmen, trees, etc. that are provided in that cabin. (But here’s a word of caution—let the professionals there glue the decorations on for you–I burned three fingers trying to do it myself!) 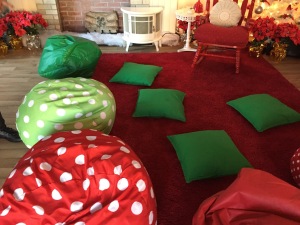 Right next door to that is a cabin where Mrs. Claus tells stories, and it’s where we finally got to sip a cup of excellent hot chocolate, complete with marshmallows, whipped cream, and sprinkles of your choice. (I say “finally” because that beverage was so popular that night that they kept running out of it!)

Roz and I took time to peruse the entire property, but we don’t drink and we didn’t have time to eat, so I can’t tell you about any of that. But we did luck into an intimate trapeze performance by a “toy soldier” in—where else?–Russia, of course! Their domed tent is spectacular!!! 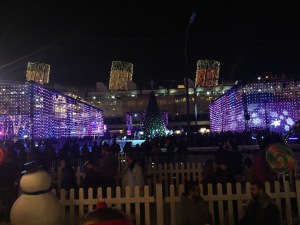 The one thing you absolutely cannot miss is the nightly lighting of the giant Christmas tree! Labeling it as such is quite the understatement—it’s a several-minute-long light show and musical extravaganza! There are dancing girls and ice skaters, too. You can even see it well enough from far away, as we were. And let me tell you that I would go back there just to witness that ceremony again!!! (And, if Mr. X will cooperate, I just may do so!) 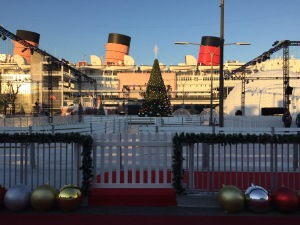 The view of the Queen Mary in the background of Chill, during the day. Photo by Karen Salkin.

Perhaps most importantly, I must laud the on-site personnel. Most of them could not have been more accommodating, and they went out of their way to be helpful. For example, a lovely server in the VIP section offered to go buy me hot chocolate with her own money! And when they kept running out of the cocoa in the cabin set-up for it, the manager there tried to give me one of his own possessions as an apology! I’ve really rarely seen people as nice as this group is, so props to the person who hired them all. 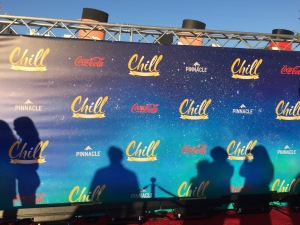 Can you find Karen Salkin’s shadow? It’s on the bottom right, the one with the obvious long hair! Photo by Karen Salkin.

My big advice is to get to the site, (and be parked and through security and at the entrance,) right when Chill opens to have enough time to do and see it all. (And to see the whole display is both daylight and the dark.) Even if you’re not a skater, slider, or bumper, there’s so much else to entertain you that you should schedule as much time there as possible. And dress warmly! Even though we’re in Southern California, with its recent heatwave, having so much ice around does get sort-of Chill-y!!!