Trending
You are at:Home»EVENTS»EVENT: BOTH ENDS BURNING’S NIGHT WITH MATT GOSS
By Karen Salkin on October 29, 2014 · EVENTS 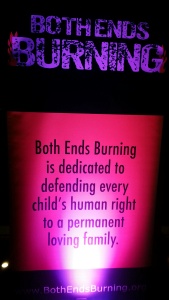 One of the big lit-up signs featuring the Both Ends Burning mission statement. Photo by Alice Farinas.

This evening fundraiser, at the W Hollywood, was quite the soirée.

The guests at the Both Ends Burning concert were the most upscale, well-dressed people I’ve seen in quite awhile. Most of my other recent events, especially the ones for Fashion Week, included the usual cast of characters who contribute nothing at all to the proceedings, on any level. But this group seemed to be well-heeled patrons of the charity. (And, speaking of heels, from where Alice and I were situated, we got to see a lot of really nice shoes on these women! That was so much fun for fashionistas like ourselves!) We also noted that many of the guests were actually in couples, which we hadn’t seen in a long time.

This fete was to raise funds for the Both Ends Burning organization, which helps children in need get adopted. Very worthy cause. (They had big signs all around, explaining their philosophy.) 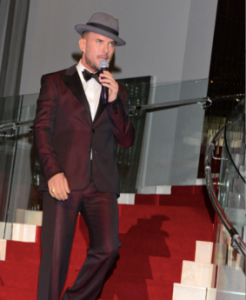 We got there a little bit late, (I’m only one girl, so I have to try to do several events in one evening,) so I don’t know what went on before the show portion of the evening, but we were happy that we arrived to the hotel just in time for the performance. It was singer Matt Goss, who’s often a headliner at Caesars Palace in Las Vegas. He does the “Rat Pack” style show, with excellent musicians and back-up singers. He rose above the flawed sound system to still sound great, and really entertained the very appreciative crowd. We noticed some dressed-up attendees sitting in front of the stage, with tables of bottle-service spirits in front of them, and all I would have needed to feel like I was back in time watching Frank Sinatra perform was cigarettes! (But I was grateful there’s no more of that nonsense nowadays! How did audiences live through all that evil smoke back then?!) 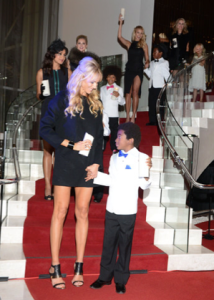 The parade of beautiful mothers and children. Photo by Vivien Killilea.

The show closed with a presentation that I really loved. Several of the women involved in this charity, led by hostess Grace Lazenby, came down the stunning spiral staircase accompanied by their beautiful adopted children. Each woman held her child’s hand on one side, and carried a lit candle in the other. It was a really powerful statement, and everyone involved looked fabulous. I loved witnessing such love.

When all that was over, the guests adjourned to the outdoor patio where they could play roulette and blackjack on professional tables, while videos of Matt played on the giant screen.

It looked like a good time was had by all. I know that we certainly enjoyed ourselves. And I really hope that Both Ends Burning will generate many new adoptees because of all this fun.