Trending
You are at:Home»EVENTS»EVENT: BEST OF IRELAND LUNCHEON
By Karen Salkin on May 23, 2022 · EVENTS

I’ve always enjoyed Tourism Ireland’s annual elegant luncheons and dinners; I missed them during the pandemic. So I was happy to receive the invitation to the one last week, signaling that they’re back.

On top of their events being very pleasant and enjoyable, not to mention delicious, the powers-that-be over there have a knack for always choosing venues I have either never been to or rarely visited.

Some of the early minglers. Photo by Karen Salkin.

And this time was no different. It was held at the two-year-old British-owned Maybourne Hotel in Beverly Hills, which I’ve wanted to check-out since the pandemic lessened and it’s become a bit safer to venture out. The hotel recently hosted a few special afternoon teas which, very sadly for me, I missed. So I’m glad that Tourism Ireland chose this location for their return to Los Angeles.

And it was perhaps the classiest event they’ve ever thrown! The guest list was exclusive, the venue beautiful, the food divine, and the Irish music, provided by the trio Mairtin Music, was lively and perfect. The presentations were delightful, to boot. 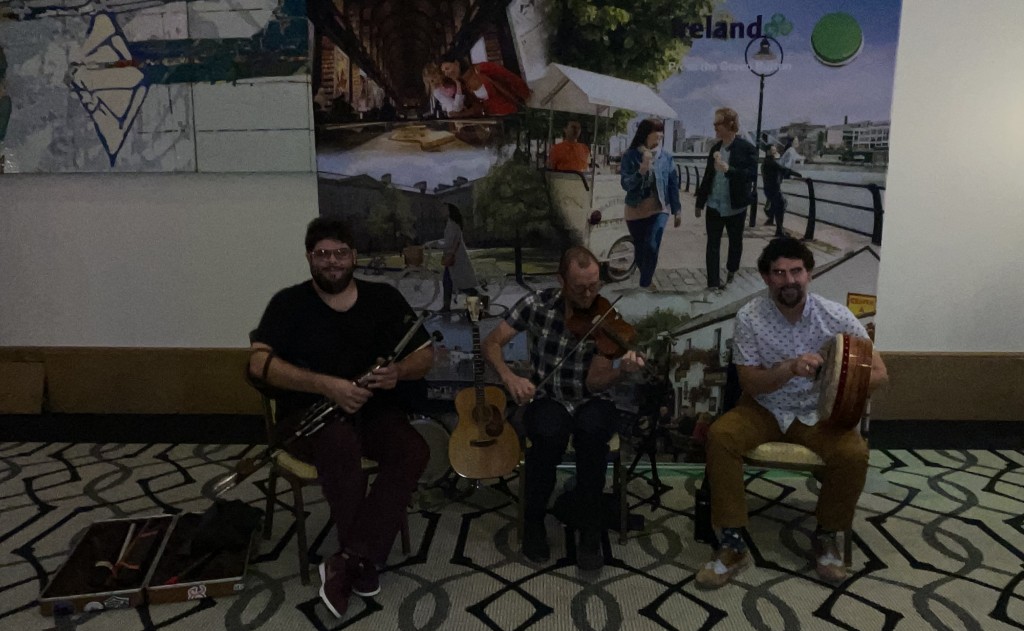 And the entire event moved right along. We guests got to mingle, learn about so much on offer in the Emerald Isle, be entertained, and partake of a delectable meal all, in the space of just two hours! And it never felt rushed.

For the first hour, we had the opportunity to network with the various Irish Travel Ambassadors. They were uber-informative about hotels, towns, tours, and attractions. We even received tiny mini flasks from Teeling Distillery. My co-writer Laura and I want to see every place they told us about! And absolutely everyone was lovely. If the entire country is like that, sign us up for a trip to Ireland right now! 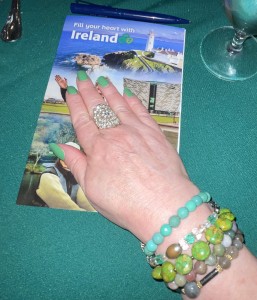 After all that, it was time to sit down to the luncheon. The group at our table was an interesting mix of journalists and Ireland representatives. Laura bonded with Martin Mangan, the General Manager of Ireland’s Carton House, over their love of travel. Laura told me that when he took the stage a bit later on to address the assemblage, Martin’s presentation “dazzled us with pictures of his beautiful hotel; it looks stunning!,” and added, “ I’m not much of a drinker, but I would love to have a drink at that hotel bar.” I enjoyed comparing notes with a fellow writer because the two of us were donned in more green (to match the occasion) than the rest of the guests combined!

Tourism Ireland’s events often feature a buffet for the meal, which I also love, but this time it was a sit-down luncheon. After my hectic past few weeks, I was more than happy to take a seat and be served, especially by the hotel’s very accommodating staff.

We began with a lovely salad of arugula, apples, goat cheese, and pistachios, which was delish. Then most guests moved on to seared salmon in an Irish butter sauce, (and we all know how excellent that country’s butter is!,) while vegetarians, (and picky eaters like moi,) went with a wild mushroom ravioli, in truffle sauce for most, and bare for me. 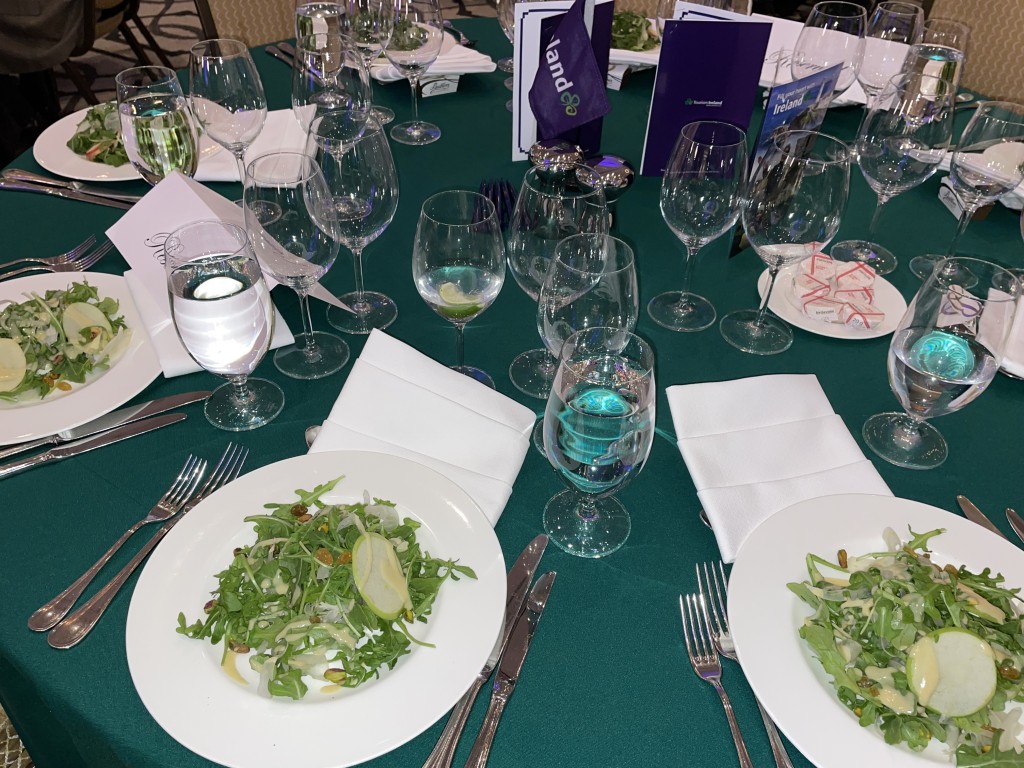 The salads. (And there are two-piece boxes of chocolates hiding under the napkins!) Photo by Karen Salkin.

The repast ended with a spot-on dessert for the occasion—a cheesecake flavored with…Bailey’s Irish Creme! How apropos! 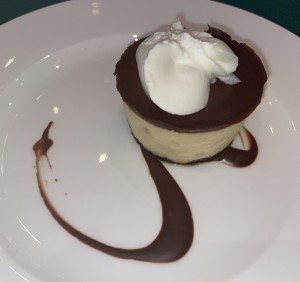 One thing I noted while we were dining—I was glad the entree wasn’t corned beef, since I recently found-out, (from the Irish stars of Belfast, on a talk show,) that not only is that not Ireland’s “national dish” after all, (as all Americans have believed forever,) but the Irish barely even know what it is!!!

In between courses, there were perfect-length speeches and presentations. After greetings from several people in the organization including Minister for Tourism, Catherine Martin; Chair of Tourism, Christopher Brook; and Head of North America and Australia, Alison Metcalfe, we got to hear from very informative and charming reps in three groups.  (I’m sure you all know how much they had me at “luxury,” so the other two categories went by the wayside for me a bit as I took down every word about being pampered.) And they made it all brief enough to keep our attention the entire time. The leader of the production kept it going the whole while with tons of energy and excitement. It was a pleasure to listen to. 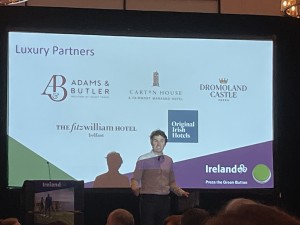 The “luxury” portion of the presentation. Photo by Karen Salkin.

Laura said what she really found “fascinating” was learning about lodging at private castles, which isn’t publicized; travelers find-out about it when they go through the luxury hotels rep. Laura said, “It felt like I was told about some secret, exclusive, underground club!” And guess what—she basically was!

We ended the day by spending a lot of time speaking with the rep of Ireland’s studio tour of Game of Thrones, Judy Hutton, (whose name sounds more like an old Hollywood star than a thoroughly Irish lass!,) who we absolutely adored! I never saw the show, but Laura has watched every second of it—twice!—so she was especially interested in the info Judy gave us. Laura told me, “I loved that show, and was very surprised to learn that a third of it was filmed in Ireland.” Now she definitely wants to see that attraction!

Actually, we both want to see all of Ireland! Now that it’s getting safe to travel again, and I don’t need to spend all my non-LA time in New York anymore, that just may be the first place I’ll be heading. Erin go bragh!