Trending
You are at:Home»DINING»DINING/TRIBUTE: ICONIC SANTA MONICA RESTAURANT BACK ON BROADWAY CLOSING
By Karen Salkin on July 26, 2019 · DINING, TRIBUTE 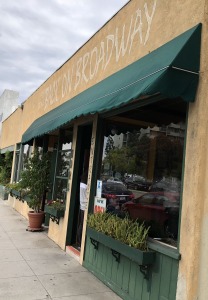 Back On Broadway. Photo by Karen Salkin.

Today marks the end of a warm and wonderful era. Back on Broadway, the restaurant that has meant the most to me (and to so many others) over the years is closing for good. I’m incredibly sad about it.

Here’s why this is happening right now: With his right-on-the-beach eatery, Back on the Beach, being everyone’s go-to venue for delicious casual fare in that perfect indoor-outdoor setting, restaurateur extraordinaire, Fred Deni, has made the difficult decision to shutter his other popular in-town Santa Monica breakfast-and-lunch spot, Back on Broadway.

He explains, “The time has come to pull in my focus, and closing Back on Broadway is the best way.” Heartbroken as I am about that situation, I know he’s right. Between running his beach cafe, and multiple catering jobs each week, he just doesn’t have the time to split between restaurants anymore. And I know Fred to give each project his complete attention, so closing one of his restaurants will allow him to better do that.

In addition to the daytime meals, BoB was also known as a fabulous party venue, including hosting fetes for Smokey Robinson, Warren Beatty, and, of course, moi! I threw just about every one of my parties there during the years of my show, Karen’s Restaurant Revue. Their spinach cannelloni is still the talk of anyone who’s ever been fortunate enough to attend one of my soirees there! (But those vegetarian delights can still be whipped-up for you, along with their other signature dishes, because the location will now serve exclusively as the kitchen for Back On Broadway Catering.)

This place actually holds sooooo many personal memories for me! Here are just a few of the most public ones: 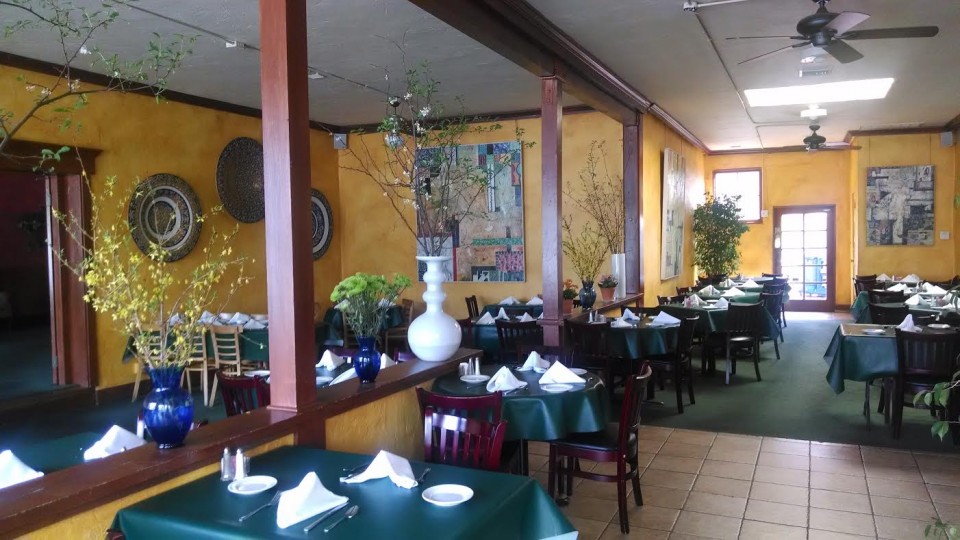 The interior of Back On Broadway.

In the early days of my TV show, I got a call from Fred Deni, who was a stranger to me at that time. During our conversation, he told me the history of Back On Broadway–right on the heels of closing another cafe, he had stumbled onto BoB, which was kismet. I just assumed that he was calling to ask me to review his place (as everyone did in those days.) He was so nice that of course I said yes! He called back a few minutes later to say that he was so embarrassed; he wasn’t looking for a review–he just wanted to know when my next show would be on! (I didn’t have a regular time slot for a couple years.) We laughed, and I said I was still going to go there for dinner.

And then Mr. X and I had an argument that evening, so I called Fred to say I couldn’t make it after all. He sounded so disappointed that I grabbed one of my good friends, and in we went. And that’s when I first learned of his cleverness and grace—not only was there a bottle of champagne chilling at my table, but there was also a film canister with a Karen’s Restaurant Revue label around the sides, (where the name of a film would be,) and it was filled with…chocolate chip cookies! Much to what is now his eternal chagrin, Fred was stuck for me with me for life from that moment on. (And the food was delicious, too, of course!)

After that, I practically lived at Back On Broadway. When People magazine called to do a story on me, and I didn’t want them to take pictures of me at my messy apartment, I insisted we go to Back On Broadway to do the photographs for my story there. Whenever I was featured in a newspaper or magazine article after that, I always referred the writers to Fred for quotes. And for every special foodie segment I ever did on any TV show, I suggested that we film it there. 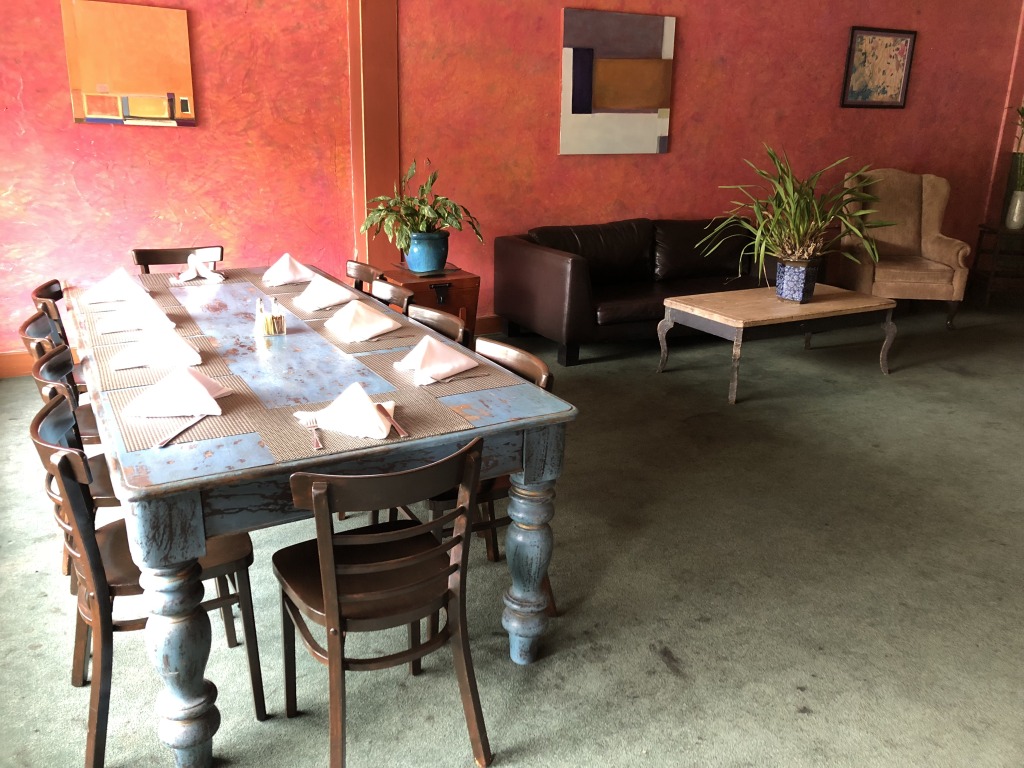 The third party room at Back On Broadway. Photo by Karen Salkin.

Whenever Mr. X and I had a bad fight, (which we fiery-tempered east coasters did quite often back then,) I’d run right over to BoB to pick-up a Chicken Kiev dinner for him, to bribe him into making-up. (And yes—it did work every time! So Fred gets either the credit or blame for us still being together this long!)

Here’s my favorite story about this eatery that’s always been near and dear to my heart: The first time I was on The Tonight Show, Johnny Carson surprised me by asking if I had a suggestion of a place for him to have dinner. I was shocked, because the show’s talent coordinator had told me to not talk about specific restaurants. But Johnny asked, so I told him all about Back On Broadway. When I went there for dinner the next night, there was a line around the block! I heard Fred ask the woman at the table next to me how she knew about his place, and she answered, “Johnny Carson told us!” (But actually, ma’am, Johnny hadn’t told you about the place; I told you about it, while chatting with Johnny.)

But no matter how it happened, it was my honor to play even a tiny part in putting Back On Broadway deservedly on the map. [Note: As a sidebar, I became friends with Fred Deni and his family. When I was at an anniversary party for his parents in Lambertville, New Jersey, his father took me around to all the relatives, and asked each one, “Did you see Karen on The Tonight Show?” If they answered that they had not, he gave them a quick reprimanding, “Then you’re stupid!” I still love that story.] 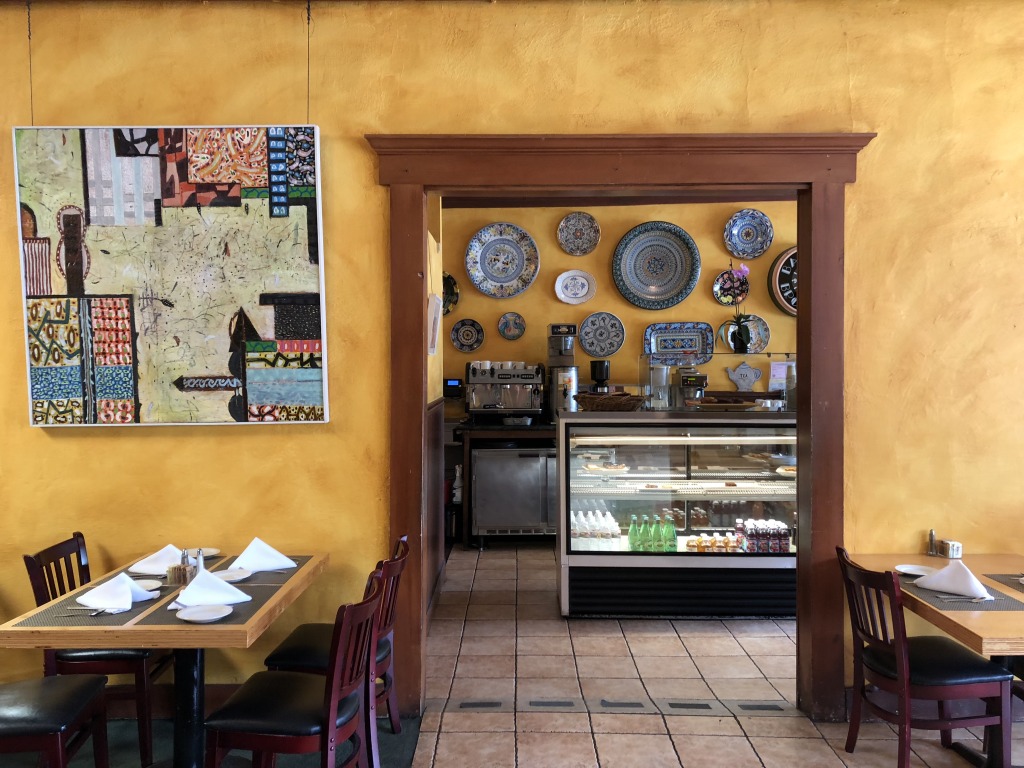 In that same time period, I got asked to open for the Temptations and the Four Tops at a theater in Beverly Hills. I had never done stand-up, but, from watching my show, the talent booker thought that I could do it. (He was incorrect, by the way.) When I told Fred that I was a little nervous about doing stand-up for the first time at such a big famous venue, he had a brilliant idea—why not do it first at Back On Broadway?! Even though it was not an entertainment venue at all, I knew that Fred would work his magic to get it done.

So he had a friend build a little stage in one of the party rooms, another one of his friends volunteered to make programs from the guy’s precious Playbill collection, and I did an evening of stand-up comedy there! When I arrived that night, carrying my performance wardrobe on hangers and in bags, we all of a sudden realized that I had no place to change, since of course there were no dressing rooms in a restaurant. But a lightbulb went on over Fred’s head once again, and he turned his empty, not-yet-in-use walk-in refrigerator into my dressing room! And it was perfect. 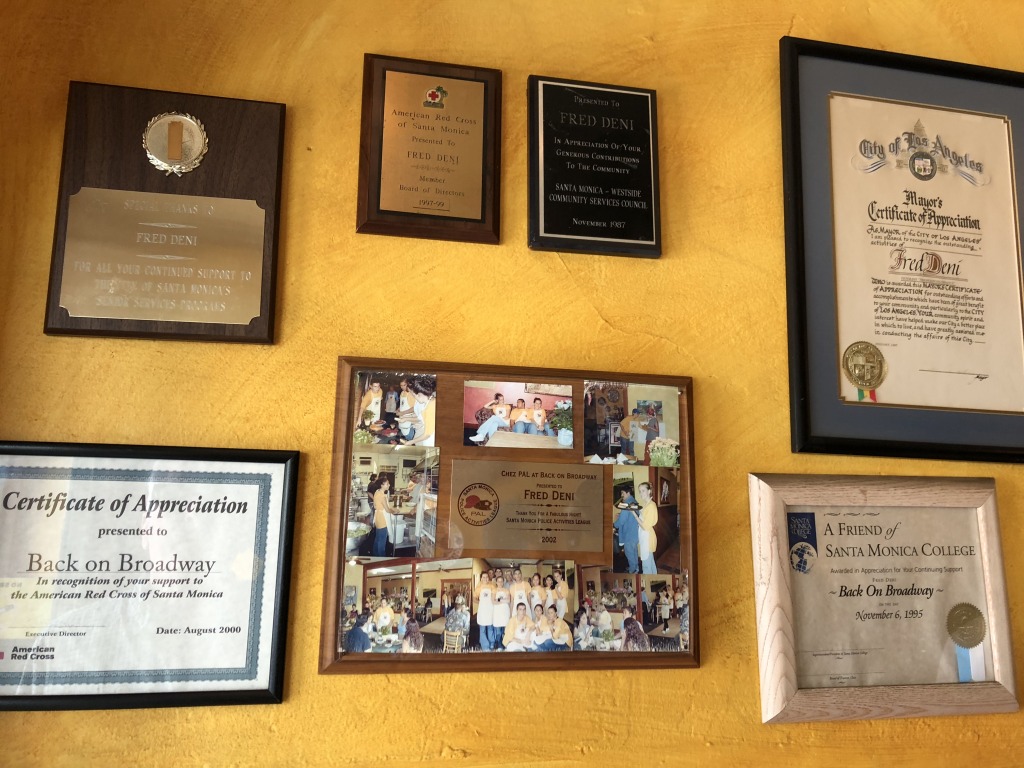 Just a few of Fred Deni’s awards over the years. Photo by Karen Salkin.

And let’s not forget about all the Thanksgiving meals that Back On Broadway has served to the homeless and seniors over the decades! That level of philanthropy is rare. I was lucky enough to be the seating hostess for several years, but because we all have so much love for Fred and his husband and co-owner, Jim Christel, the roster of volunteers got so huge that some of us have had to hang back. But Fred and Jim’s kindness has gone on. And on. And on.

But no worries for the multitude of fans of Fred and Jim–those two aren’t going anywhere! Those who crave Back on Broadway’s delicious fare, (along with the extreme hospitality of Fred and Jim,) don’t have far to go to still enjoy that very same food and reception. Just head on over to their other Santa Monica cafe, Back on the Beach, for the creative breakfast dishes, penne vodka, and, of course, the famous Fred’s salad. And in the summer, it stays open for all three meals, so you can even enjoy the sunset right on the beach! (For more information, go to www.backonthebeachcafe.com.) 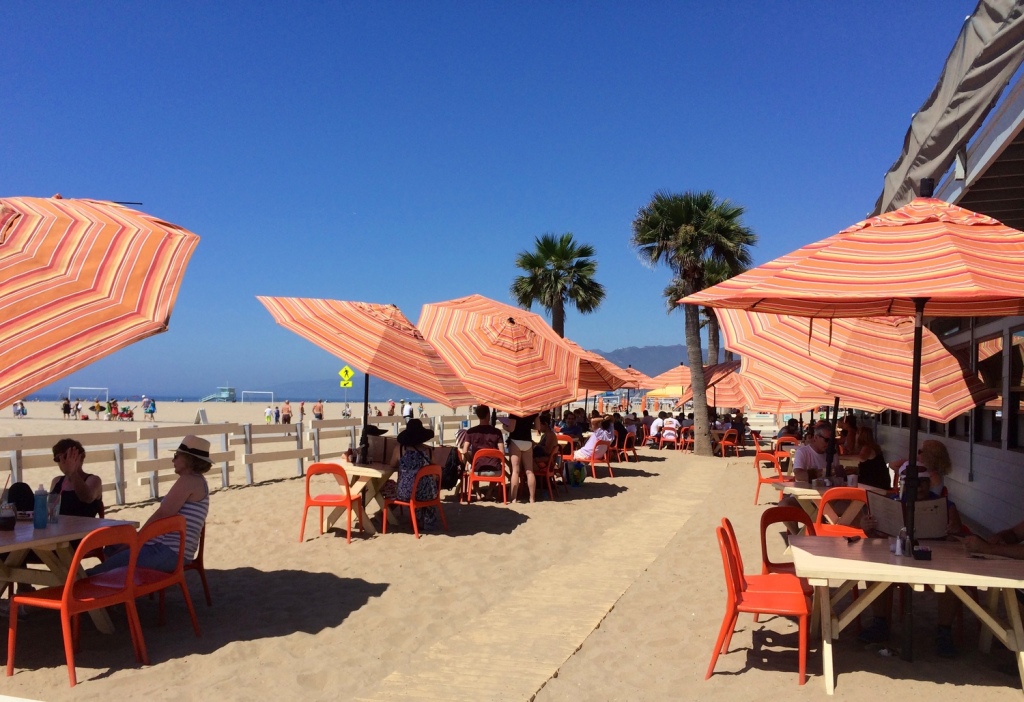 Back on the Beach.

I wish the fondest of farewells to Back On Broadway. And thank you for all the great memories!