Trending
You are at:Home»DINING»DINING/PARTY: THE FLATS RE-INTRODUCTION PARTY
By Karen Salkin on December 6, 2017 · DINING, PARTIES

When I was doing my TV series, Karen’s Restaurant Revue, and also for my Dining section in this e-zine, (which you’re reading right now,) I’ve never pretended to be a food critic; I’m a restaurant critic. That means that I’m not one of those pretentious peeps, who make believe…well, it’s easier to explain it in one of my YouTube vids, which you can watch here (but come back here after you’ve viewed it): www.youtube.com/watch?v=lstbObwr490.

Salmon skin appetizers. Photo by Karen Salkin, as is the big one at the top of the page.

To that end, I’m always about the entire dining experience, which includes the fare, but is far from limited to it. So, I’m going to tell you about a happening party at the The Flats in Beverly Hills last week, even though it featured almost no foods that I eat. (Never fear—I brought along two trusty eaters who were thrilled with it all!)

I had been to The Flats’ opening fete about six months ago, and was—how shall I put it—less than impressed. (If you want to compare my then-and-now experiences, here’s that link: itsnotaboutme.tv/news/dining-the-flats-restaurant-opening-party.) So, when I was invited to their recent re-introduction party, I was most curious to see what’s changed since then. And I really respect the powers-that-be over there for recognizing the need for a do-over. And it’s all good news this time! [Note: I caught a gander at their new menu, and, outside of their many signature flatbreads, it was entirely different from before, which, trust me, is a good thing. A very good thing!]

I’m glad that the place looks exactly the same as before, which was their original strong suit. They also kept the good art on the walls, and for this soiree, they moved all the tables out from the middle of the room, for more mingling. (Which was a good thing because this guest list was far superior to the previous one! Just sayin’.) 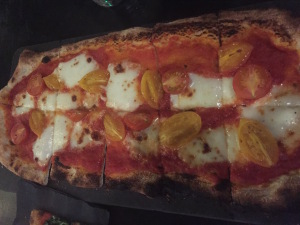 A basic cheese and tomato flatbread. Photo by Karen Salkin.

And this time, instead of over-taxing the kitchen (as it appeared they did last time) by letting the assemblage order anything they wanted off the menu, they passed the appetizers that they wanted us to sample! And trust me, it was all very generous, including many interesting cocktails, (that you know I didn’t try, either. But they looked great. And everyone seemed very happy with them.)

So, out of everything, the only thing I ate was a sort-of margherita flatbread, (they had no basil that night, so they put tomatoes on it instead.) It was fine, but I so starving by that point that I just inhaled it and didn’t judge.

But my pals, Lauren and Babette, tried most of the very not-the-norm offerings, and raved about it all! Both their favorite was a soy marshmallow, which they described as “interesting,” “mellow,” “spicy,” and having a “sweetness to it.” Lauren said the little spoon of lobster topped with caviar (I told you it was generous!,) was “divine,” while Babette lauded the unusual eggplant and hummus flatbread. They both agreed that the gnocchi with truffle oil was “insanely rich.”

So I’m sure that those of you who know my food dislikes by now understand why there was nothing I eat. I detest truffle oil even more than coffee, alcohol, olives, and e-words, and I don’t like lobster, caviar, or eggplant. (Mr. X always says that I’m a cheap date…and I don’t cost that much, either. Ba-dum-bum.) But you also see why the crowd went nuts over everything. And there were even more dishes than that on offer that night! 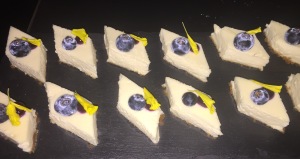 But please do not feel bad for me, thinking that I couldn’t eat anything, because I was in for a fabulous surprise. The very best change from last time is that…they finally have desserts!!! Three of them, to be exact, and all delicious. When they came out of the kitchen, I was thrilled that I had eaten hardly anything else because I still had room to try them all! My favorite was the very creamy tiny cheesecakes, each with a blueberry on top. I could have consumed just the whole tray of those and been a happy party guest. But I also tried the bite-sized carrot cakes and super-mini brownies, the latter of which were just perfect for those of us who always need a taste of chocolate at the end of every meal but don’t want to add too many calories at that point. 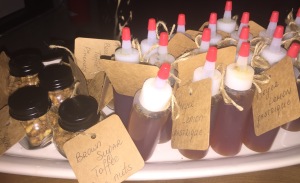 The two choices of little gifts on the way out. Photo by Karen Salkin.

So, this re-introduction was a big success for The Flats. And for us, as well, including getting a choice of two cute gifts on the way out the door. One was a little bottle of Meyer Lemon Gastrique, (gastrique is a flavoring for sauces, and lemon…well, as many of you know, is way up there on my very long list of food dislikes,) so of course, I chose the other one, a tiny cute jar of Brown Sugar Toffee Pine Nuts. (Who thinks of these things???)

Their regular menu has several items on it that I do eat, such as salads, chicken breast, and brussels sprouts, so if I get some time in the near future, I will go back and do a full review for you guys. And I’ll bring along the members of my Reviewing Panel who love the foods on the rest of it!