What a brilliant way for an eatery to have an opening party! (As opposed to the one I went to the night before, where they invited every schnorrer in town, and served mainly booze, and hardly any food! So no one knows what the food at that one tastes like. And the crowd was people who won’t come back to eat there, and writers who can’t possibly have anything good to say about it! So this downtown one was a zillion times better, on every level!!!)

Live Basil and Smashburger invited just the right number of people to their opening for the event to have a buzz about it but not be uncomfortable, so everyone could appreciate the potential.

From the Live Basil side. Photo by Karen Salkin.

When I was doing my show, Karen’s Restaurant Revue, (before I was writing all the time!,) I used to have time to go to the Staples Center for a lot of sporting events and concerts. But in recents years, especially with more and more time spent in New York, all that got away from me. (And I hate the horrible Nokia Theatre, with the worst sight lines and seats in a venue ever, so it would have to be some gnarly great event to get me there ever again.) I was aware of some of the build-up of restaurants and shops in the LA Live area, but was shocked to see how many more have arrived. It’s almost like Fremont Street in Vegas now! (Not quite, but in a good way.)

Now that happening area has two new eateries to choose from, (with a third from the same company coming perhaps as early as next month.)

So, here’s how they did this super-fun opening soiree: We were invited to come to dinner as a party of four, (or fewer if, unlike me, you don’t like to share the wealth…or just have few pals who want to schlep downtown on a Friday night,) sit at either, or both, eateries, and order whatever you want! That’s sooooo much better than passed hors d’oeuvres! This way, you tried exactly what you wanted, with no waste or grousing by the guests. (Yeah, no waste because every single group left with giant bags and boxes of left-overs! I was glad to see so many non-wasters.) 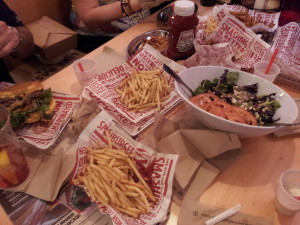 Our messy table at the end what fun! Photo by Jeanine Anderson.

There were four in my party, of course, since my friendship bench is deep. Todd, Jeanine, Marcia, and I all loved the whole event! The food was great, especially the pizza, the variety on both menus was just right, (including that beer is available on tap, which Jeanine loved,) and the atmosphere was festive, even with normal-operation lighting. It was like just being at a restaurant with your friends or family, having dinner, but you’re also so popular around town that you know half the place! It really harkened me back to doing my show, when that was the case for me every time I dined out. (I have a feeling that, with so many regulars at the downtown entertainment venues, that will also be the situation for many others.)

The quick overview is that Live Basil and Smashburger are abutted but separate, so you can sit in one and order from both! Or move from one to the other. Parents can sit their kids down for delicious pizza, but be on the other side alone, having burgers and such, enjoying some private time, but knowing exactly where the rest of their fam is. So many possibilities. 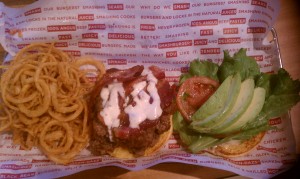 We tried several dishes, but I didn’t want to ruin our party vibe by going into work mode to write notes; so I may have to go back and do a detailed review for you guys some other time. But trust me, it was all appreciated. We all seemed to go for the pizza (which featured natural cheese and organic sauce, ) a bit more, especially the plain margarita, but Todd, who was already a Smashburger expert, seemed to favor the carnivore experience. (There are veggie burgers, as well, and a couple of salads.)

They did a really cute thing with the shakes. It seems that everyone wanted to try them, but with how stuffed we all were from the rest of the fare, they would’ve had to roll us out of there if we each had a full-size shake. So they put a few sips of each in mini cups, with a dollop of whipped cream, and we got to try them that way. That was perfect; even dessert-eschewing Jeanine tried a baby one and enjoyed.

The funny thing is that you know I love getting a goodie bag on the way out of a party, but since we were all leaving with many leftovers, we didn’t need anything else; those turned-out to be the best goodie bags of all time!