For one of my last meals in New York City on my most recent trip, I chose B & CO in midtown because it was close enough to my friend Lauren’s house to walk, and I had heard good things about it. 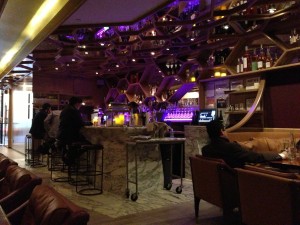 It was beautiful and classy at dinner, and I understand that it has a really happening lunch scene. And it’s right down the block from the Plaza Hotel, one of my favorite places in New York. What could be more romantic? (For you guys in the future, not for Lauren and me, of course. She left her husband home, and I left Mr. X in Los Angeles, though not by choice.)

This is a Sicilian restaurant, so, of course, the men in charge were adorable. The owner, Max, and Giampaolo, the host, could not have been more accommodating to us. 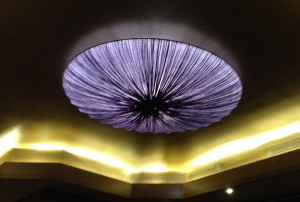 The gorgeous ceiling fixture in the back room. Photo by Karen Salkin.

You can sit in the front of the restaurant, where the gorgeous bar is, with the doors open onto the street in nice weather. But the New York air was just a little bit too much for me that night, so we chose to sit in the spacious back room. Every seat in the entire restaurant is cushy and comfortable, and the tables are beautiful and sturdy, (with the restaurant name engraved in them!,) and we loved the look of everything, including the gigantic purple ceiling cover, that I don’t even know how to describe to you. And the entire time we were there, there was upbeat yet classy music playing, at just the right volume.

After chatting with us a while, Max insisted on sending out little samples of certain dishes he wanted us to try, so, unfortunately, I cannot tell you anything about portion size.

But Lauren wanted me to stress that most of the food is low-calorie and all-natural, including all wild-caught fish and certified grass-fed meat. All the vegetables are from local farms, as well. She’s much more health-conscious than I; I care about only the taste of the food.

I was thrilled to find a classy eatery menu with homemade tomato soup on it! Max explained that there are little drops of bread throughout it, which made its consistency chunkier than the norm, because that’s the Sicilian way.

Perhaps our favorite dish was one that we had at the beginning; the homemade meatballs (in the “antipasto” category) were absolutely delicious. Next time I visit, I think I’ll just ask them to pair the meatballs with some spaghetti as my dinner, and I will be a happy girl. 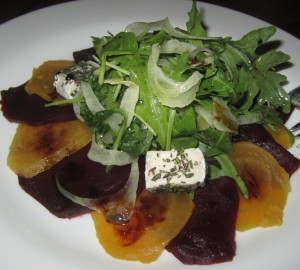 I really respect that Max would not serve us the burrata plate we begged for because he didn’t like the batch that had come in. That’s an honest restaurant owner. So instead, we went with red and yellow beet salad that came with brin d’amour, which is a French cheese with herbs, so we got our cheese fix that way. 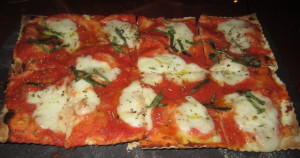 Continuing on with our cheese fixation, we ordered a margherita pizza, which was unlike any we’ve ever had before. Lauren loved it so much that she ate the whole thing, save for the one piece I had, by herself! She described it as “pizza on a cracker.” It was actually on a flatbread that had a crisp, cracker-y crust, which Lauren said was “very light.” And she was thrilled that it was only 180 calories for the whole pie! We were shocked when Max gave us that good news. 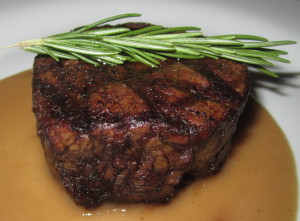 We were really full at that point, so we were happy to sample smaller portions of three entrées. Both of our favorite was the filet mignon, which was cooked perfectly for us, even though she likes it more towards rare while I opt for closer to well-done.

The swordfish was milanese, (pounded down and breaded,) which was a very different, interesting way to serve seafood. And the light sauce on it was comprised of mint, lemon, and ginger, three tastes I’m far from fond of, but even I found it to be very tasty.

Speaking of tasty, we found the chicken speziato, with a Cajun orange honey sauce, to be the most flavorful of the dishes we tried. I’m sure that’s because of the spicy Louisiana aspect. 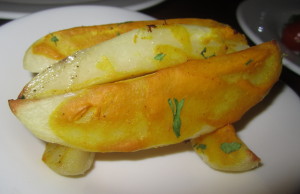 We augmented the main dishes with three sides. While the thick hand-cut french fries were good, I absolutely loved the sautéed spinach. And Lauren went for what was the most unique dish on the menu, Greek potatoes, which are grilled in a mustard sauce.

What was really interesting was that so many of these dishes sound regular; the menu features fish, meats, salads, and pastas, in addition to some other categories. But the preparation of each dish was a surprise. Leave it to those Sicilians.