Even though I don’t have much time for relaxing on week-ends, (or ever!,) brunch is my second favorite meal.  (Can you guess what my #1 is? Let me know in the comments below, and I’ll confirm it for you.) I love it when someone else makes the plans so I can just go along with the program. So last week-end, when I was invited to a fabulous brunch in the South Bay, I grabbed my friend, Alice, and off we went. 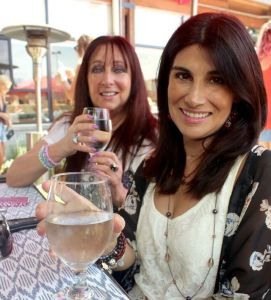 It was at Salt Creek Grille in El Segundo, and was for a group of females in the media biz, so everything was already set for us, which made is so easy.  I felt like I was at a friend’s baby shower, minus all the dumb games! (No offense, new moms.)

Salt Creek Grille is in one of my favorite shopping centers, (especially at holiday time,) Plaza El Segundo.  I had been to this eatery before, for an evening private party, but that one was inside.  This time we were in the beautiful, breezy, umbrella-ed garden, at tables of four.  I loved all the different fashions we came up with.  There was everything from shorts to jeans to beautiful dresses.  (I was in the “cute dress” category.  But a girl who sat with me had the best outfit of the day—a thin chiffon dress with pastel balloons on it!  It actually matched my favorite tablecloth in my house.  How can one not be happy looking at any form of balloon?!) 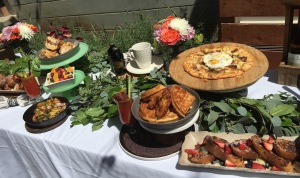 Photo by Karen Salkin, as is the big one at the top.

The organizers did something so cute—rather than use table place cards, they marked our seats with tote bags with our name tags on them.  Then, to whet our appetites for what was to come, there was a beautiful “display buffet” set-up, featuring the plated dishes we were about to feast on.  But, happily for me, we had table service, which I always like so much better than having to get up and dish it out myself. (I know—poor, pampered Karen, right?)

I have a feeling that our table was the biggest group of pains-in-the-butt.  One girl was a vegetarian, one a pescetarian, I’m on the “stroke diet”, and, shockingly, I found-out that day that, contrary to my previously-held belief, Alice does not eat every ingredient known to man! (That was an eye-opener.) But, between the four of us, we sampled everything, with very happy results. 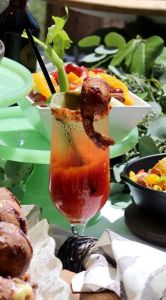 Since I don’t drink, I watched the rest of the assemblage enjoy Salt Creek Grille’s signature Bloody Mary. Alice said, “What a great idea–it comes with a skewer of bacon-wrapped shrimp (which is filled with horseradish,) so you get a drink and an appetizer at the same time! Perfect.”

While we were mingling at the beginning, the amiable staff passed one of Salt Creek’s signature dishes—beignets.  Alice said,  “They were delicious! I loved the sweet cream filling, and it was bathed in bourbon caramel sauce.”

Then, as soon as we sat down, we had their house salad, which I loved.  It had thin slices of green apple, and candied walnuts, and was very healthful and filling.  Alice had it with a chunk of crabmeat quiche and said,  “The crab quiche was baked with asparagus, and was so delicious. It’s a good healthful choice for brunch.”

We then moved on to Huevos Rancheros, but, since we were all diet-challenged, none of us had the full dish! We each enjoyed the parts we ate, though. I was the only pork girl, and I found it, and the rice and beans it was combined with, to be very tasty and spicy. It’s the perfect dish to help wake you up on a lazy Saturday! Alice said the “huevos,” topped with pico de gallo, was a “great choice for a Mexican brunch.” 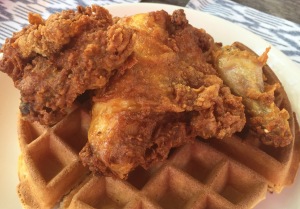 The rest of the girls had the generous, pretty waffles, which Alice described as “crispy, delicious, thick, and yummy.”  The dish was actually “Chicken and Waffles,” but I ate all the fried chicken! (I told you we were a weird group.) The honey-fried chicken was heavenly, and I could not resist the uber-crunchy breading.

Alice said the Monte Cristo sandwich was “mouth-watering!” She went on,”It was so thick and high, and filled with turkey, ham, and swiss cheese. The raspberry melba sauce that was drizzled on it made it extra-yummy!”

It was really a lovely brunch, and now we can’t wait to go back to Salt Creek Grille and try their other meals. 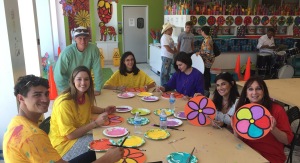 Our gang of artists: (l to R) Leni, Kelley, Bernie, Flavia, Jessie, Alice, Karen. Can you tell who loves painting the most?!

A perk of dining in that area is that there’s so much to do in Plaza El Segundo! They have tons of stores, and beauty services, and something very unexpected—a charity painting studio! Let me explain: People can stop into the humongous studio of Portraits of Hope anytime, to paint colorful designs that are then hung at places that need a little brightness, such as hospitals, laundromats, and even a fire station or two. (They did my beloved sheriff station in Aspen, I believe. The station is not beloved to me—the guys who work there are! Long funny story, for another time.) So, the kindest of the brunch guests went over after we ate, to paint disks to beautify animal shelters. I thought I was into it, until I saw what others were doing! Some of these people are real artists! I was really impressed. 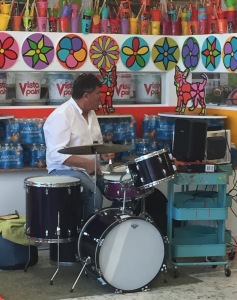 Even though you can’t keep your creations, (that would defeat the purpose now, wouldn’t it?,) you can take pix of them. Alice is using hers as her phone screen saver! And it looks gorgeous and professional!

We were entertained throughout by volunteer drummer, David B. What a nice man to do that for us! He made it feel like a party! And if you get too caught-up to go out for libations, there are plenty of comped bottles of water to keep you hydrated along the way.

So, a week-end morning of delish brunch, followed by doing an act of kindness, which mellows you out at the same time—what could be a better way to spend a few lazy hours? Nothing!

And please remember—I’ll be live-tweeting the Emmys this Sunday.  @MajorCelebrity.  I’m sure there will be a lot to discuss, even though almost all the nominees are from cable rather than network channels, which is what I mainly watch.  But you know that someone will mis-speak, or wear something hideous, and I’ll be there to dish it all.  I hope you’ll join me.