Trending
You are at:Home»DINING»DINING: WILSHIRE
By Karen Salkin on April 22, 2013 · DINING

Wilshire is one of the famous restaurants in Santa Monica that I wanted to try for awhile. And I recently got my wish. It turned-out to be basically another of the yin-and-yang ones.

I thought it was one of the best meals I had had in a long time, while Mr. X was not impressed at all. He said it was just okay.

I really didn’t know what to expect, but judging from the pictures on their site, I expected darkness, and dressed accordingly. Let me tell you, if you go for lunch on a not-rainy day, during which they seat everyone outside on the deck, (even in winter,) make sure you go there looking perfect for bright daylight. OMG! I did not want to see that many faces so well when I was eating! Not fun. (And, at the same time, I had to keep checking mine in the knife, that doubles as a mirror for girly-girls like me. I didn’t want any of the other diners to get queasy looking at me!) 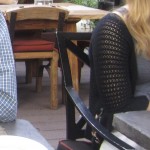 Just showing you the horrible chairs, and how close together the tables are. All photos by Karen Salkin.

The worst part of the whole experience was the totally uncomfortable iron chairs, with the backs on an outward-pointing angle, meaning away from the body, giving no support. They’re horrible. And bad for everyone, but absolutely the worst seat for someone with back issues! If I hadn’t entered Wilshire with a broken back, I’m sure I would have left with one! Who chose those chairs??? I can’t believe anyone even designed them, but I can understand it for a home patio. But as a seat to eat off a table from, they’re absolutely ridiculous!!! How did anyone in the restaurant business pick them out?! And even more mysterious is that the owner(s) approved them!

And the tables were wide the wrong way! You almost have to sit on the table to be able to chat with your dining companion! And with all the tables being so close together, you can’t say anything private. As soon as we sat down, Mr. X said, “Let’s just text each other.” He had the right idea. It was impossible to have a conversation. Luckily for us, I had just played five hours of Charades at a party earlier that week, (and won every game of it, I might add, except for the last one, when my back finally gave out,) so I was already warmed-up to just act it all out for each other. 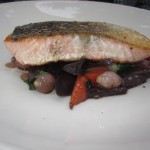 Now to the food.

We each started with a salad of greens with beets, hazelnuts, and feta, and we both loved it. But our agreement stopped there. While I adored my short rib sandwich, (that I haven’t seen on the menu since, by the way,) Mr. X hated his Scottish salmon. It was almost raw! He had to eat only around the edges of the piece that was small to begin with. And they left the skin on, which is just gross! And it came with next to nothing in the way of accompaniments.

We sort-of agreed on the upscale-eatery-sized desserts. (Meaning: not big.) We tried the chocolate bread pudding, which we thought was nothing special, and neither of us loved Wilshire’s signature sticky toffee pudding, either, although I, surprisingly because it’s not my kind-of thing, liked it a bit more than Mr. X did. He said it should be re-named “Toffee Explosion.”

So, there you have it. Even though I liked the food well enough, there was just nothing there to make me ever want to return. Even after my back surgery!