Trending
You are at:Home»DINING»DINING: MEET
By Karen Salkin on April 12, 2010 · DINING

As restaurant critic for the Culver City News, I had reviewed newcomer Meet back in November 2009. The owners were then billing it as a neighborhood California bistro with a French twist. But I recently heard about their conversion to be more of a true French restaurant, beginning with a chef change. (From one Scott to another one, which makes it easy to remember.) 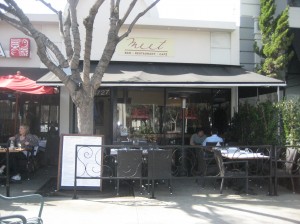 So, after yet another back doctor appointment, I wanted to relax with an afternoon treat, en Francais. When I saw that they now have a cheese platter, which I consider to be the new hip food item, and better yet, chocolate fondue, those are exactly what I wanted. To me, that would be the ultimate luxurious afternoon combo. (And, after seeing a picture of the cheese platter, I was hooked. More on the fondue later.) But my friends wanted to eat lunch, rather than a snack, no matter how filling it would be, so we tried some of Meet’s basic menu offerings, both the staples and the latest.

The newest tasty tidbit there, though, is Mario, their new European waiter! Caryn and I both gasped when we saw him. For those of you don’t live in Culver City and therefore hadn’t seen my first review, the owner, Sebastien, is quite adorable himself. But so is his wife, so it was fun to drool over the new single boy.

We wound-up choosing basic dishes, so we didn’t get to really dig into much of their new French menu, (for example, the whole mussels section, which I’ve rarely seen elsewhere,) but we still found a lot to like, especially in the dessert category.

First, the “delicious, couldn’t be better, perfect temperature” soups. No fooling, since the venerable Chasen’s closed, taking with it their famous cream of sorrel soup, I haven’t tasted any this good! And, trust me, that’s saying a lot for me. I loves me some potage! All of the varieties earned three “ummmm”s. (There were three of us, so that’s the best.)

In the salad category, the Asian style chicken was absolutely gigantic, the beet had the most beautiful presentation and was my fave, and Caryn said the Belgian endive one was “perfectly crisp with a crunch of flavor.” 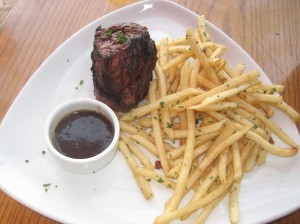 Eadie was full by then (as were Caryn and I, but that’s never stopped us,) so she cooled her heels until dessert. There were many dinner entrees we were interested in. (We were there in-between lunch and dinner.) Caryn had to order her grilled salmon off the dinner menu, (which Eadie deemed her highest “melt-in-your-mouth,”) but interestingly, my filet mignon was on both. For the same reasonable price! It was cooked exactly to my liking (medium well,) which few chefs do correctly. The shoestring fries that accompanied it were perfection. But the secret to the success is Chef Scott’s secret sauce. Make sure you ask for it. We were practically bathing in it!

On my previous visit, the desserts were weak, and I gently told Sebastien that they must fix that. Boy, did he listen! Not only were there more, but the two we tried were amazing and the ones we didn’t looked interesting. And everything about the desserts was so fun that the ladies wound-up putting it all into their coffee! Though Eadie said, “The coffee is superior in every way,” they put the sauces, ice cream, whipped cream–even fondue, into it! 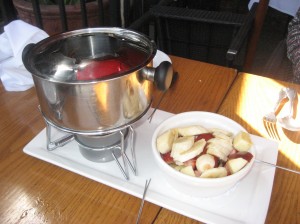 Now to the piece de résistance–the chocolate fondue. Where to begin? First of all, the menu states that it “serves 2 people.” I’d like to see those two! It seriously feeds at least 4, if not 5 or 6! Unbelievably generous portion. And it was absolutely scrumptious!!! I’ve eaten lots of chocolate fondues in my life, and this one just may be the best. The chocolate was brilliant! And the fruit assortment for it, apples, bananas, and berries, was super-fresh.

You had to roll me out to the sidewalk after that, (good thing we were already seated on the delightful patio,) but those women just couldn’t be stopped! I don’t know how they did it, but they went for the warm melting chocolate gateau, with vanilla ice cream and whipped cream. I seriously thought that Caryn was going to cry from loving it so much! (Just the other day, a week and a half after this meal, Caryn and I were getting pedicures, and she was telling the willing audience about this cake.) Eadie said it was delicious and Caryn said, “It’s not even like a cake! It’s so dense!!!” 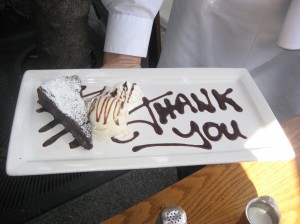 So, to re-cap, next time I have an afternoon to relax, and I’m not at afternoon tea, I will definitely be at Meet, with a cheese platter and chocolate fondue. And Mario.