When I was in New York recently, I attended a beautiful event at the Langham Place hotel in midtown. (You can read all about it here: itsnotaboutme.tv/news/new-yorkparties-langham-hospitality-group-cocktail-party.) It whetted my appetite to explore its sister site that’s right here in my own backyard. 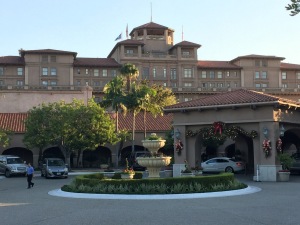 When I learned that the Langham Hotel in Pasadena serves Afternoon Tea, I could not wait to go! And what better way to kick-off the holiday season than with doing just that the day after Thanksgiving?! Mr. X even came with me, which you know is rare. But I had a feeling that this would be so special that I’d want to share it with him, rather than with my Femme Fatales this time. And I was correct! It was gorgeous from beginning to end, especially at this time of year.

First of all, the hotel itself is exquisite. In all the times I had been to Pasadena, I had never even been aware of the Langham! It’s in a very different section of town, and getting there was half the fun. It’s in what looks to us to be the “Bel-Air of Pasadena.” 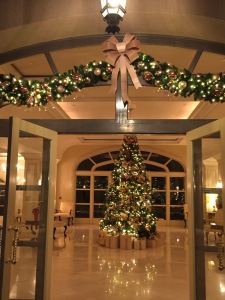 And their holiday decorations are stunning! There are several different Christmas trees, and wreaths and colored balls everywhere, and even an incredible gingerbread village! There are visual treats at every turn.

Before I tell you about the Langham’s tea in specific, I have to mention that people always point-out to me that Afternoon Teas are usually a tad pricey. But let me tell you–that repast is soooo worth the splurge. In addition to how wonderful and relaxing it is, (not to mention a boost to the soul, in my opinion,) you never need to eat lunch or dinner on the day of! And the one at the Langham is, shockingly (for how wonderful it is,) actually less costly than just about every other hotel in Los Angeles. And there, you feel like you’re out of town for the day! It’s like an oasis in the big city. 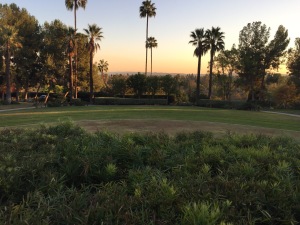 Mr. X deemed it to be a “grand tea,” as opposed to a cozy one, an assessment I agree with. Seriously, I felt like I was in a romantic movie! (Having Mr. X there may have helped that aura.) The look of the area where the tea is served, in the Lobby Lounge, is like none other than I’ve experienced before. The beauty begins as you walk in, and your eyes are treated to the panorama. The giant windows look out onto manicured green grounds. And Mr. X pointed-out that everything is “elegantly spotless.”

The mood is set from the get-go by pianist Jacquelyn Johnson. She played special holiday music in addition to traditional songs, and it was all just what the doctor ordered. We actually missed it when it was over while we were still lingering. 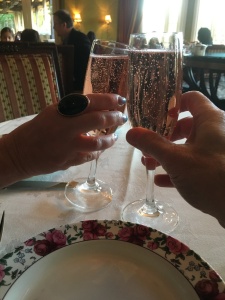 Karen Salkin and Mr. X toasting with their pink champagne. Photo by Mr. X (who, apparently, is ambidextrous!)

The Langham Afternoon Tea is the most organized one ever. The warm, helpful personnel (who Mr. X noted are sincere about it all,) know exactly what they are doing. Maritza and Maribella checked on us regularly, without making us feel rushed. They were also really accommodating. [Note: To that end, I must tell you this little story. On the day we were there, the air-conditioning was having a problem, so the room was brutally freezing. I went to the bar where the tea urns are, to warm my hands on them, and jokingly mentioned to the staff that I needed a blanket. A few minutes later, Irvin approached our table with not one, but two cozy blankets, one for each of us! He explained that, since this is a hotel, if ever someone asks for one, they get them a blanket from housekeeping! What a perk! We were warm and toasty for the rest of our stay. So, I guess it was a cozy tea, after all!]

So, let’s get to the food 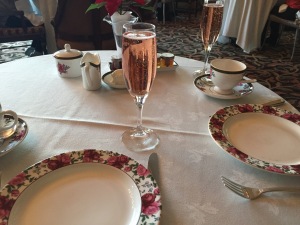 already! (I guess I’m relaxing as much writing this as I was living it!) We each began with a glass of pink champagne, which is optional. (I know—I don’t drink! But it was so lovely to just hold the elegant glass in my hand, and toast with it.) Then we each received our own pot of tea. Mr. X chose the signature Langham Blend, while I went with vanilla rooibos. We each loved our own choice; he went black, while I added a bit of milk and lots of honey, which they were generous about.

The comestibles come on a traditional three-tier tray, but it’s so much better than the norm because it’s all served on delicate, classy Wedgwood.* It’s not the Jasperware pattern (cameo on matted blue) that most of us associate with the word “Wedgwood,” which is hard to eat on. (Trust me on this—when I was little, my family and I used to stay at the famous Wedgwood Inn bed-and-breakfast in New Hope, Pennsylvania, and all the dishes were that pattern!) Rather, the Langham features an appropriate rose-themed design. [*Note: Yes, that is the correct spelling of “Wedgwood,” minus a second “e.” It’s the name of the man who founded that iconic bone china company.] 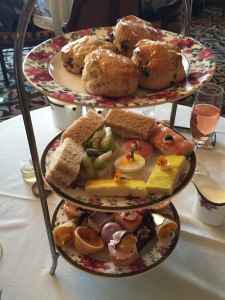 There was a delightful variety of interesting finger sandwiches. Mr. X tried all five, while I changed two of them, for dietary reason, (which they are uber-accommodating about.)  We were fond of them all, but both of our favorite was the Watercress Pesto Marinated Caribbean Shrimp tidbit. He was also pleasantly surprised by the Smoked Salmon with a dot of caviar on the top.

Then we moved on to the scones, which I was thrilled to see they serve warm. (Some places really don’t understand what a difference that warmth makes.) We appreciated both the blueberry and cranberry equally, especially because the clotted cream they serve with them is superior! (The menu says that lemon curd also comes with them, but we didn’t get any, which was just fine because neither of us eats it! We were more than happy with the selection of petite bottles of jams and preserves.) 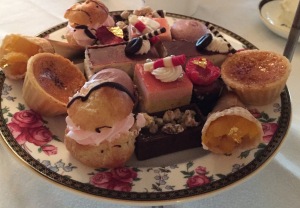 Close-up of the desserts. Photo by Karen Salkin.

Even though we were totally full by then, we were bowled-over by the absolute plethora of desserts! I’ve rarely been offered so many at a tea. Of course, they’re basically bite-sized (if you’re Mr. X; if you’re me, each one takes a few minutes to eat,) but there were nine of them!!! We each ate just two and took the rest home. (They pack leftovers up beautifully, I might add. Our bag looked like something out of the gift shop!) My favorites are the chocolate macaroon and the chocolate mousse cup (are you sensing a theme here?,) while Mr. X loved the coffee tart with candied nuts on top. The apricot cone was something I’d never seen before, in all my years of taking afternoon tea, so I’m a fan of that one, too. 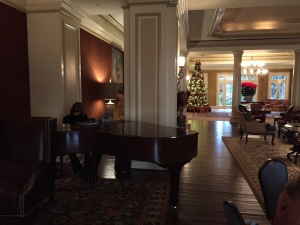 Jacquelyn Johnson on the piano. Photo by Karen Salkin.

During the year, you can enjoy this whole repast on any afternoon of the week. But during this holiday season, the week-ends are reserved for the Langham’s “Teddy Bear Tea,” which is aimed at children. (And their moms, as well, of course.) That one has different times and details, so please check-out their website below, if you’re interested. (I definitely am—I thought of finding a kid to be my beard, just so that I can go to that one, too!) 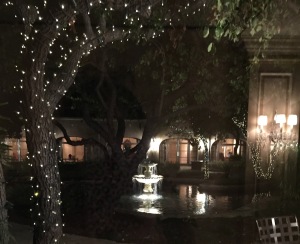 The beautiful view of the courtyard as we exited, now that it gets dark so early. Photo by Karen Salkin.

One admonition about the tea meal, in general, before I go, and please take this one to the bank: Please, everyone—do not call this meal “High Tea!” You think that makes you sound classy, but it does not. High Tea is an evening meal, basically for peasants, and involves supper fare, such as sausage rolls, meat pies, and crusty bread. This is Afternoon Tea—a graceful meal, with little tidbits, which was invented over a century ago by the Duchess of Bedford to bridge her hunger gap between lunch and dinner. But now it stands on its own, and if done right these days, is beyond filling. So, please stop confusing the two, just because you heard someone use the word “high” in connection to it! (And, now that you are no longer one of them, please correct the other culturally-challenged people, as well!)

Lesson over. Now just enjoy it!