This interesting new eatery opened in that little bit different, hipper area of downtown L.A. a couple of weeks ago. A more generous opening soirée could not have been thrown! And judging by the looks of some of the crowd, (I saw a lot of crashers and pretenders,) they didn’t deserve such sumptuousness. 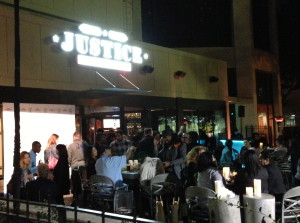 But my friend, Lou, and I were happy to be included, and we found some really nice people to share a booth with. So, in addition to all the fabulous food I’m about to tell you about, the atmosphere felt like a real party.

An excellent band performed all night, whose name I didn’t catch but they were good enough for lots of people to be up and dancing to. In-between their sets, DJ Bryan Davidson played music that was worthy of the hip-hop clubs I used to run back in the day. I talked to him a bit, and he was really nice, too.

In the food category, there were tons of passed dishes, (which were much heartier than the usual hors d’oeuvres,) and three separate buffets. As we entered from the happening patio and bar scenes, the first table we came upon was a charcuterie, cheese, and fruit one. It was beautifully presented, with little drawers filled with all kinds of breads and crackers.

In the back was a ribs and wings bar, that also had good crispy fries and delicious coleslaw. The ribs were out of this world, so I hope they’re on the regular menu.

And lastly, there was a dessert counter, featuring four different kinds of cakes and pies. 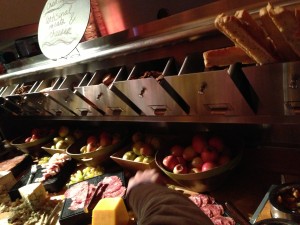 The charcuterie buffet. Excuse the man’s arm in there, but the guests were kind-of grabby. Photo by Karen Salkin.

It was all delicious, but the winners of the evening were three that they passed: vegetarian flatbreads, little bowls of short ribs on mashed potatoes, and shrimp and polenta in a bowl, as well. We honestly couldn’t have eaten another bite, even though I’m now craving another round of it all.

Even better to me than the food was Justice Urban Tavern’s absolutely pleasant and accommodating personnel. I hope that all the servers who worked the party also work at the restaurant regularly, now that it’s open, because I’d be happy for any one of them to take care of me when I go there again. You know I’m always partial to waiters over waitresses, but the girls at this one were especially nice.

There was only one bi-atch, but she was working the front table, so I have a feeling that she is no reflection on the restaurant. But she was so creepy that after meeting her, we prematurely left the party because she depressed us so. I have a feeling that she was working with the PR team, (an intern, perhaps?,) and her actions were the opposite of what a PR person is supposed to be doing, so I hope she finds another line of work, one in which she doesn’t have to deal with people, really soon.

Outside of that, a fabulous time was had by all. I’ll tell you more details on the actual restaurant if I have time to review it this summer, and I have high hopes that it will be a glowing review.