Trending
You are at:Home»DINING»DINING: IL PICCOLINO
By Karen Salkin on January 9, 2013 · DINING

Right before the end of the year, I enjoyed a holiday celebration with a group of high-powered people who chose the restaurant Il Piccolino on Robertson. I had never heard of it, but it seemed happening enough, even though, with all the plastic surrounding the interior, ( I think so it can be a total patio in warmer weather,) I felt like I was dining in the inside of a container to pack away unwanted sweaters.

They had a really strange, hard-to-read menu. There were a million different fonts and shades of ink, the categories seemed scattered, and some of the fare bizarre. I didn’t know what was going on. I figured I was safest with a basic steak, and, always wanting to be a good date, chose the least expensive one because the descriptions were just too difficult to figure out. (Not to mention that one needed a proctology lamp to make-out what was written on the menu!) 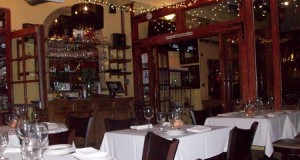 The steak and accompanying skinny fries were actually good enough, just not for their over-inflated price. But my onion soup tasted like a brick of salt fell into it!!! How have no employees noticed that before? In my case, it might have been okay because I was getting over a bad cold, so I was losing my voice; I could have just gone into the ladies room and gargled with it!!! (The restrooms are through the tiny kitchen, by the way. Not fun.) And it was served in a way-too-small cup for the contents, so, with the very first spoonful, the broth went everywhere! It would be a terrible dish for a first date, let me tell you.

To be fair, I overheard one of the men at my table say, “These are the best mussels I’ve ever eaten,” so that was one satisfied customer. Actually, I think we were all satisfied; I was just way underwhelmed. (The rest of the guests wouldn’t have voiced it if they were, too, out of deference to our generous host.)

My favorite part of dining out is dessert, of course, (as anyone who’s seem my restaurant reviews can attest to.) I had been looking forward to having a good and/or interesting one all day. I was a tad concerned, though, because I had searched the web for their dessert menu, to no avail. I found their basic menu in several places, but no desserts anywhere. That’s always a red flag.

There were several desserts on their in-restaurant menu, but not even one that I eat!!! Everything had coffee, lemon, or alcohol, or was just something not worth the calories and unhealthfulness. (And the “assorted gelato” said “$90!!! What’s up with that???)

So, the host ordered a giant chocolate mousse for the table. Yes, I do love chocolate, but for some reason, not chocolate mousse, though I eat it if there’s nothing else around. But this one was worse than the junk in school cafeterias!!! I tried two bites, slowly, but couldn’t do it. So, I ordered coconut sorbet, which I usually like, just not by itself; I figured if I paired it with the mousse, the combo might work for me. But this one tasted like lemon! Oysh.

While none of the other nine people in my party complained about anything, I heard no raves, either, except for that one about the mussels. Oh, and the bread was also eh, with the butter being absolutely tasteless.

So, there you have it. I didn’t hate the place, but there’s no reason to ever go back. Alas, they don’t even have cute waiters! (It’s not that they’re not cute; they’re non-existent—it’s all waitresses.)

Hopefully, my dining experiences in 2013 will go uphill from here. After all, I think they have to!