Trending
You are at:Home»DINING»DINING: IKE’S PLACE SANDWICHES
By Karen Salkin on March 26, 2018 · DINING

When I review restaurants, I’ve often just eaten there one time, but with at least three other people, so I can give you a panoply of opinions.  But, as I was just eating my hundredth (or so) sandwich from Ike’s Place in Westwood Village, I realized that it’s about time I tell you about this one, since I have so much experience in their fare.  I also have several other opinions on it.  But this time, we all agree on everything! 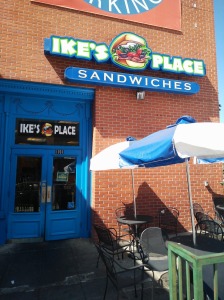 The Ike’s Place in Westwood Village, an area that’s near and dear to my heart.

I first discovered Ike’s at an event around town a few years ago, and after that, I was always happy to see them again. At those fetes, I usually had a chicken sandwich from them, which is named “Menage a Trois.”  (All their sandwiches have catchy monikers.)  I didn’t even know they had sandwich shops around town—I thought they were solely caterers!

My friends Alice and Lisa were usually the lucky pals I brought with me to those happenings, so they joined me in sampling the sumptuous sandwiches, and they also became fans of Ike’s.  One time I brought a vegetarian one home to Mr. X, (a sandwich, not a person,) and he joined us in our admiration.

So when I found-out that they have an eatery right in my neck of the woods, near UCLA, I could not have been happier.  And not only have Mr. X and I become regulars there, but I’ve introduced them to several members of my posse.

Our only problem has been deciding what to order!!!  They have so many choices!  And there’s also a “secret” menu, so you’ll have a lot to wade through when you go there yourself.  (The entire menu is not on-line, either.  So, plan on an extra fifteen minutes on your first visit to Ike’s, to read all the combos on the boards.)  Or you can put together your own creation, from the many listed ingredients.  There are lots of vegan options, as well, but if you see a sandwich you like that says “vegan turkey,” for example, you can just tell them that you’d like the real thing, (as I do!) 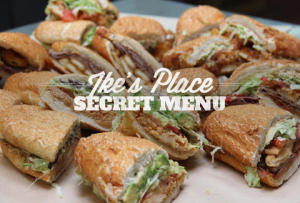 And these opinions are not just mine—they’re the same across the board for everyone who’s eaten them with me.  This is a telling tale:  My friend Thomas, from Rhode Island, was out here for a couple of weeks recently, and we were lucky enough to spend a lot of time together.  I took him to many really fun events, including play and musical openings, (with great seats and after-parties,) the opening of the Halloween event at the Queen Mary, a major sporting and music event at UCLA, (with all-access passes,) and a few other things that I’m too lazy to type.  And, of course, I introduced him to Ike’s.  The day before he was leaving, we were talking about all the fun we had.  I asked what he had liked best, and without hesitation, he told me, “The highlight was the sandwiches!”  And he was 100% serious!  On the busy day he was flying back home, he even went back there to get a couple more for the plane ride!

So, the following month, when my fun friends, Lauren and Taylor, were visiting from New York City and the Hamptons, I, of course, took them to Ike’s.  They’re used to fancier dining, for sure, but I had confidence in my choice of foods. And guess what?  They loved the sandwiches so much that they even brought one to the ultra-upscale woman they were staying with, and she loved it, too!

So I feel very comfortable recommending Ike’s Place to everyone.  By the way, you can sit on the petit patio to eat right there if you don’t want to take them to go.  And they have all kinds of treats that you can augment your lunch with.  (I say “lunch” because Ike’s is primarily a daytime establishment.)  But I usually just call my order in, and it’s all ready for me when I get there, complete with green-apple-and-caramel lollipops in the bag! 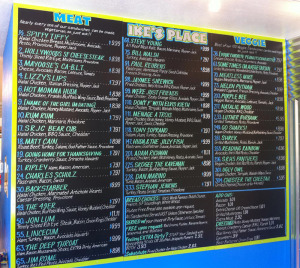 We all order different sandwiches, (Mr. X is partial to the “Rawson Thurber” and the “Tony Soprano,” both on French bread, as opposed to Ike’s most popular Dutch bread,) but I whole-heartedly recommend the one I’ve stuck with from the beginning. It’s not on the board, so you just have to remember the name.  I’m keeping my fingers crossed that they’ll re-name it the “Karen Salkin” one day, but for now, it’s called “Going Home For Thanksgiving.”  It consists of turkey, cheese, and cranberry sauce, and I lose the sriracha, keep their famous secret “dirty sauce,” add lettuce and tomatoes, and have them put it all on their thick, home-baked whole wheat bread.  Besides being delicious, this one is healthful, as well, which is such a bonus.

Ike’s serves their sandwiches hot, but they’re good cold, too.  By the time we eat them, they’re usually lukewarm, which is perfect.  I’ve rarely finished both halves in one day, much less one sitting, so when I finish it the next day, I just microwave it for about thirty seconds and I’m good to go.

For those readers who are not in SoCal, there are many locations all around California and even some in Arizona and Nevada.  I hope you all get to experience Ike’s soon.  And you can thank me later.

For more info, go to www.ilikeikesplace.com.