On a recent rainy evening (which could have been any of a number of them, with all this rain we’ve been experiencing!,) a pal and I ventured out to Woodland Hills for a dinner party at new-ish Indian restaurant Haldi Root. 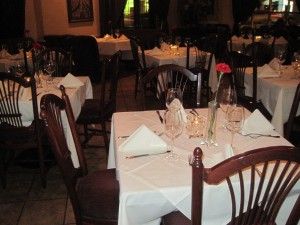 The first thing we noticed, outside of how really not far away that part of the Valley was to us west-siders, was how gorgeous the dining room is! Even though the fun front bar is a karaoke scene later, the dining room is class all the way. (Not that karaoke isn’t classy, but I don’t think we associate it with an upscale eatery.)

The chef, Sanjay Kumar, actually specializes in Italian cuisine, which he cooked for many years in Austria of all places. I had planned on trying those dishes instead of the Indian ones because I prefer that food, but what was already ordered for the guests turned-out to be so appealing that I had to try it, and then so delicious that I couldn’t switch tastes. (I also had heard that Chef Kumar had spent some time at Silver Lake’s Tantra, but I had been there only for the club scene, so now I wanted to try his famous Indian cookery that I had missed back then.)

As we were being seated, I noticed that they also have an Indian buffet, but our hosts had already pre-ordered, so I hope to go back to try that sometime. I actually really loved every dish that I tried, which was only a few, but my pal, who’s a major eater, went nuts for it all! 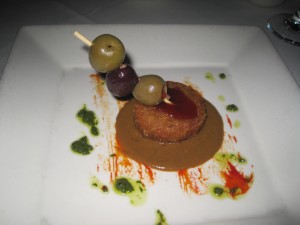 The aloo tikki, which are basically chicken croquettes, my favorite Brooklyn diner dish of all time, that I can rarely find anymore, were wonderful. I could have eaten a shipload of only those and been very happy. [Note: I know that “shipload” isn’t the real word, but it coveys my appetite for those tikki exactly.]

My guest went to town on all things lamb–chops and curry. I thought she was going to marry those chops! She couldn’t be separated from them. She loved the vegetarian dishes, as well, and was impressed that all the spices were just right. 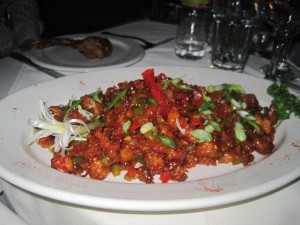 I decided to forego the chili chicken appetizer in case it was too spicy for wimpy me, but loved the shrimp masala with perfectly cooked rice. And the garlic bread, which is giant flat grilled bread, was absolutely robust. (For bread.) Neither of us could put it down.

This is how satisfied I was–I didn’t even think of asking if they had anything chocolate for dessert!!! I found-out later that they do, which is surprising for an Indian restaurant, so now, of course I have to go back there.

I will try to do a whole review of Haldi Root sometime in the near future, but I wanted to make sure my Los Angeles readers knew about this delicious newcomer into the Indian cuisine scene until I have more time.