As I was sitting in the Ahmanson Theatre audience on opening night of Matthew Bourne’s Swan Lake, a new thought occurred to me: when I die, I want to come back as a Matthew Bourne dancer! That means that not only would I be one of the best dancers in the world, but that I’d work with the most creative, visionary genius there’s ever been. When I met him a few years ago, I jokingly asked Sir Matthew Bourne to marry me, (with Mr. X’s blessing, by the way—he’s always looking to unload me,) but I realized I don’t want to marry him—I want to be him!

Then I would be privy to all the beauty and inventiveness inside his brain on a daily basis. 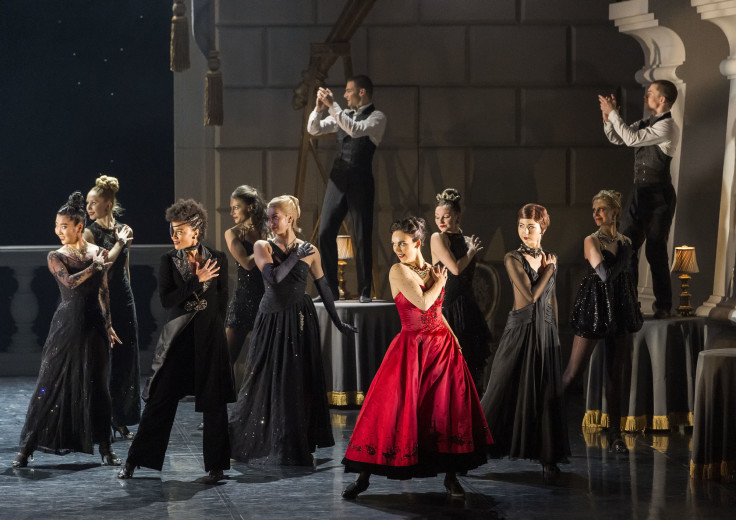 Photo by Craig Schwartz, as is the one at the top of this page.

This is the third time in twenty-two years that I’ve seen his amazing version of this classic ballet, and I’m still floored by it. As Mr. X pointed-out, one can see ten performances of his Swan Lake, and never see the same show twice, adding, “The show shimmers with class.”

During the magnificent performance, I never looked at my watch even once, which I think was a first for me. And I noticed that there was a dearth of the usual theatre coughing during this entire presentation! I think we were all just holding our breath—I finally understand the true definition of “breathtaking.” 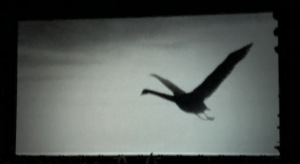 I actually started crying at the very beginning, even before the curtain rose, when the swan projection on the screen began moving! I knew what was to come, and got overwhelmed at how fortunate I am to live at a time to have this wonderful opportunity. (I’m actually tearing-up again now, just writing about it! No lie.)

And this is interesting—Matthew Bourne’s is the main Swan Lake that I know now, after seeing the classical one about one hundred times since I was a little girl. I had to look up the original story when I got home because I could barely remember it anymore. That’s the impact Matthew Bourne has had on me.

As dramatic as the second half gets, especially the last two scenes, so much of this ingenious production is charming and absolutely hilarious. The dancers’ facial expressions really read to the back of the room. 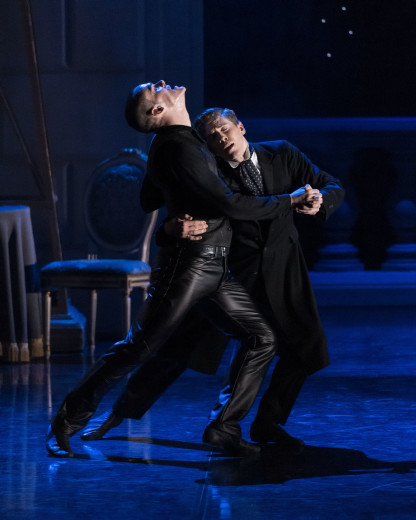 Will Bozier and Andrew Monaghan. Photo by Craig Schwartz.

When Sir Matthew first presented his version of Swan Lake back in 1995 in his native London, and then in 1997 here in Los Angeles, (also at the Ahmanson,) it was very controversial. The thought of male swans was more than many literati could handle. I don’t think any of us know what his intent for the characters really was back then, but I concur with the prevailing opinion that it definitely seems homosexual in nature. I believe that another of the interpretations of the swans being male is that they are a symbol of freedom to the prince, but none of it is for me to say. I really don’t care about the tale—I’m just into the amazing dance and the fun humorous parts. In all honesty, I’ve rarely enjoyed a story in any classical ballet, because most of them are sad and some are downright scary. And in my life, I never care who loves whom, so it’s all good. I just go on the journey with it all. (This time, a crazy thought hit me—is the prince supposed to be in love with the tough stranger guy, or with the swan? I certainly hope it’s not the latter because that would be a whole other scenario.)

But in this day and age, I certainly hope that everyone who sees this ballet/dance theatre will just decide the narrative for his-or-herself, and accept it. And revel in the marvelous work from everyone concerned—choreographer, dancers, set and costume designer Lez Brotherston, lighting designer Paule Constable, and the wonderful Tchaikovsky music, which is always a joy to hear. 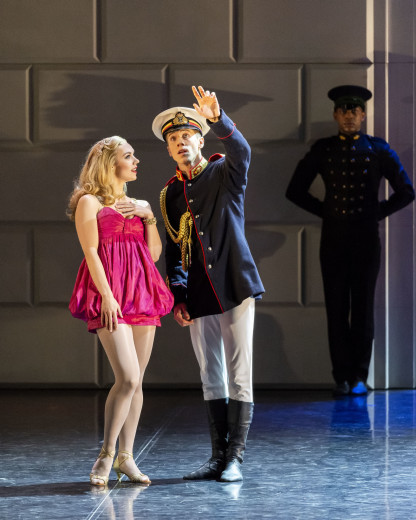 As always with most dance presentations, there are at least two dancers for every role over the run, and while I can’t imagine anyone from Matthew Bourne’s company, New Adventures, not being absolutely superb, I’m just telling you about the ones who performed on opening night.

Shockingly, because you know how much it’s always been about Matthew’s male dancers for me, my two faves this time were both females! Katrina Lyndon was a blast as The Girlfriend. Even more amusing was the Moth Maiden in the ballet-within-the-ballet, Mari Kamata, whom I first lauded two and a half years ago in Matthew Bourne’s Early Adventures at the Wallis. What an adorable young lady she is! (Okay, I did just turn into my mother for a second there.)

And, for the first time ever, I enjoyed the Prince’s dancing more than that of the Swan/Stranger. Yes, Will Bozier is excellent in that heavy-duty dual role, but Andrew Monaghan’s Prince is so light and flowy. And extended. I’ve never even noticed the Prince in this ballet before, but I could not take my eyes off him this time—I was mesmerized by the beauty of Andrew’s movement. I absolutely adored him. 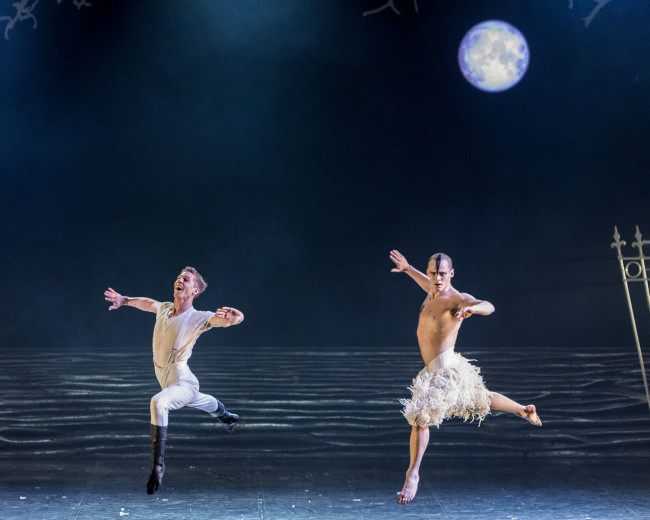 Andrew Monaghan and Will Bozier. Photo by Craig Schwartz.

The famous dance of a foursome of swans was played perfectly for laughs here, making it one of the highlights of the show. I only wish it had been longer. It’s a supreme example of Bourne’s brilliance.

Of all of it, I advise that you had better see these dancers while you can, before they age out, as New Adventures stars Adam Cooper and Alan Vincent did, much to my eternal dismay.

One wardrobe note is that the main swan isn’t dressed even a little differently from the other swans, which I found interesting, but distracting. I kept losing him in the flock. But maybe that’s the point. 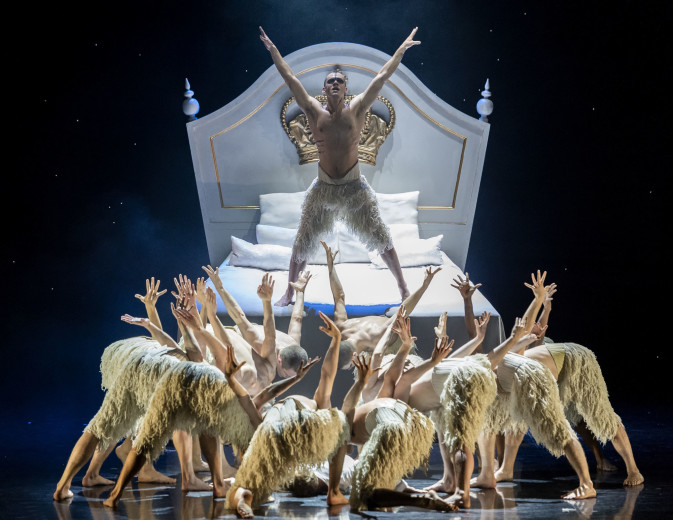 Matthew Bourne’s Swan Lake is so magical that I feel like I still haven’t told you enough. I loved it so much that I have the urge to give Matthew my first born!

But rather than that, (luckily for him,) let me sum up my feelings about Swan Lake with this brief parable from my life: Shortly after the first time I was on the Tonight Show, I was at a party for a friend’s parents.  His father proudly took me around to all the guests and asked, “Did you see Karen on the Tonight Show? ” If they answered no, he’d reprimand them, “Then you’re stupid!!!”  And that’s how I feel about Matthew Bourne’s Swan Lake; if you have this amazing opportunity given to us by the Ahmanson, and miss it, you are most definitely stupid!