This was my fourth World Choreography Awards, and it was as fabulous as ever! 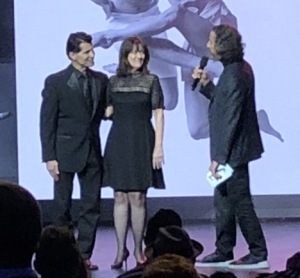 The rest of this most appreciative audience ever totally agreed with me–I’ve never seen so many heartfelt standing ovations in one night! And one of the biggest cheers was for WCA creator Allen Walls and co-producer Cheryl Baxter-Ratliff, a tribute with which I totally agree.

I know that I write this a few times a year, but it always bears repeating: members of the dance world are the most unheralded artists in the world of entertainment! Many dancers can also sing, as in the case of nominee-that-night Blake McGrath, and act, like Jennifer Lopez, but most singers and actors absolutely cannot dance like pro dancers!!! And none of this art would work without supremely talented choreographers to begin with. So I really appreciate that Allen created an awards show just for them.

The Lab. Photo by Susy Miller, as is the one at the top of this page.

I sat next to krump dancer Oldz Kool, who has seen a lot of dance in his life, and he said this whole show featured the wall-to-wall best dancing! He was especially impressed with the opening act The Lab, who won the television competition, World of Dance, this year. He told me the routine they did in this show was the best hip-hop choreography he’s ever seen, which was held up perfectly by the fabulous dancers. 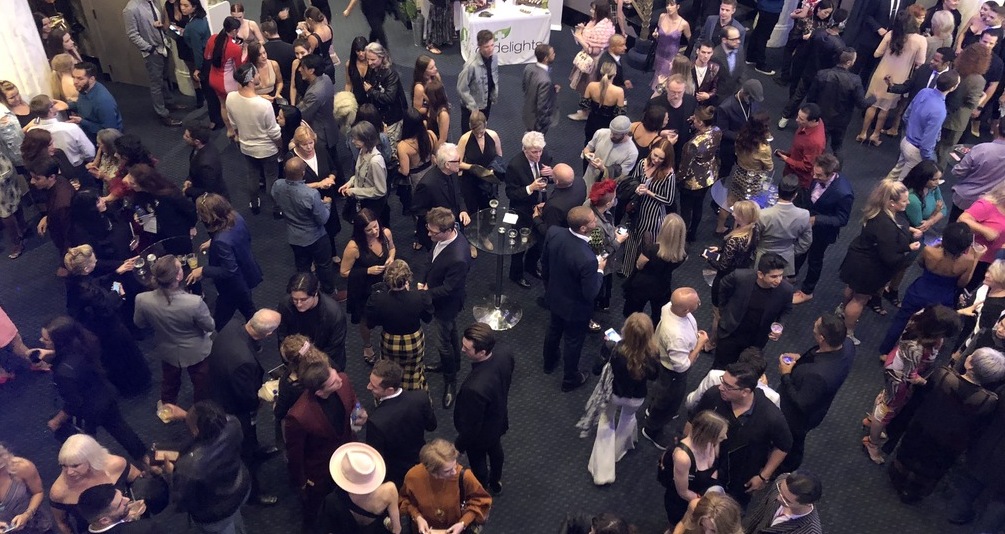 The pre-show mingle. There’s a “Where’s Waldo” of Mr. X in there!!! Photo by Karen Salkin.

Before I get to the particulars of the World Choreography Awards, I have to tell you about the pre-show mingling. For at least an hour before we all sat down, the lobby of the Saban Theater in Beverly Hills was abuzz with dancers, choreographers, and just plain old dance lovers, such as myself. And it was nice to see that there didn’t appear to be any snobbiness among the humongous crowd—everyone looked happy to see each other, friends and strangers alike. Even the usually event-eschewing Mr. X was comfortable there! 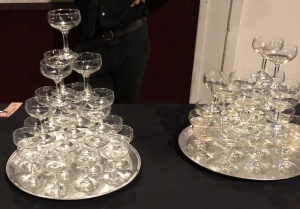 Adding to the festive atmosphere was complimentary champagne, provided by Break the Floor. That was a generous and lovely touch.

During all that, I got to chat a bit with two of my absolute fave dancers, both of whom I’ve been lucky enough to meet before. First I ran into Dancing With The Star’s Gleb Savchenko, who is one of the most stunning humans I’ve ever seen. I first met him several years ago, before he was even on the show, and am still stopped in my tracks by his beauty! He presented a Choreo Award with his wife, choreographer Elena Samodanova. 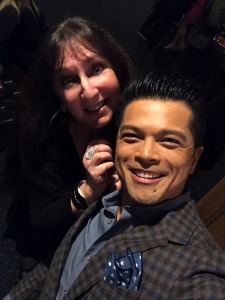 Even better was hanging with adorable Vincent Rodriguez III, who plays Josh Chan on Crazy Ex-Girlfriend, (which is sadly ending this year. In the immortal words of Nancy Kerrigan, “Whyyyyyyyyyy???”) We had originally met at this same event last year, and he had taken a really fun selfie of us, so we were both into repeating that experience. (Mr. X was about to take the pic, but Vincent insisted on taking the selfie again because he was so good at it last time.) The three of us talked for quite awhile, including about his dance and martial arts skills. He is truly as adorbs as he is on the show!!! I was so glad that he and two of his male co-stars, David Hull and Scott Michael Foster, presented an award that evening.

This year’s World Choreography Awards was hosted again by actor/dancer Kenny Wormald, who had done the honors last year, too. We loooved Kenny, even though Mr. X is still upset that they ever re-made Footloose, (one of his fave films,) so that’s quite the compliment! The videos of Kenny parodying different dancers/choreographers were especially hilarious! 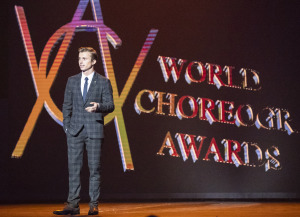 The show was comprised of the perfect number of awards, interspersed with amazing dance performances, comedic videos, and some special announcements for dancers, including revered choreographer Anita Mann announcing the creation of the Emerging Artists Fund, which should be a boon for the dance world. And Kathryn Burns, a winner that night, enlightened the assemblage about choreographers not being unionized, (which is a disgrace in this business, with all the beauty they create,) and suggesting a Choreographers Alliance be formed as soon as possible. I hope someone gets right on it. (Are you reading this JLo and Derek Hough??? Those two seem to be able to always get things done.) 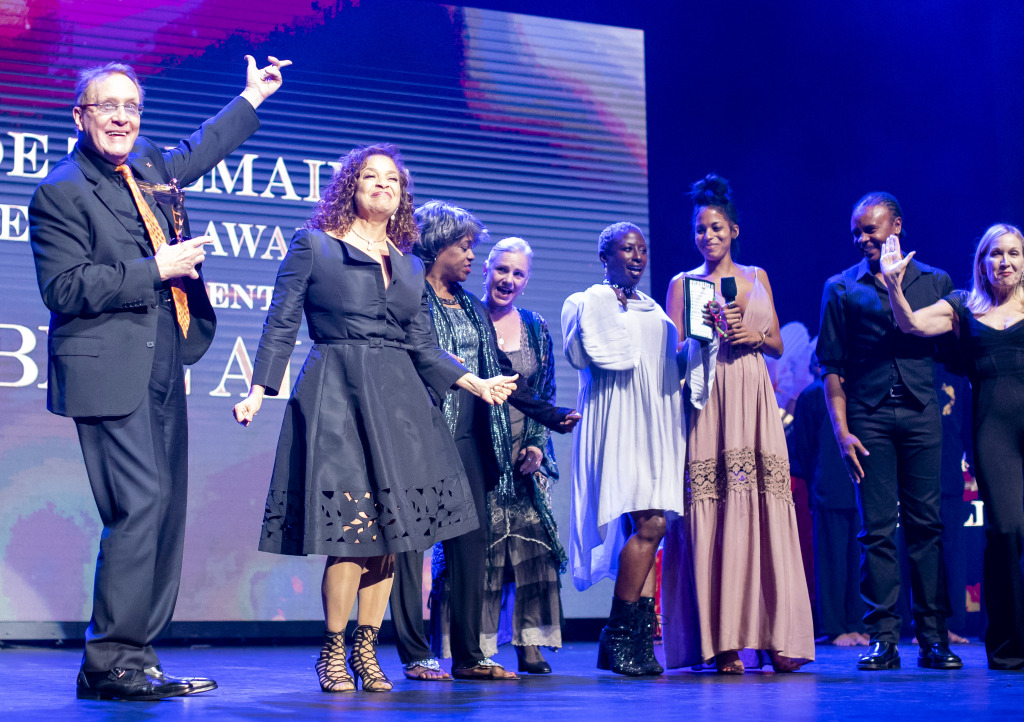 Joe Tremaine, Debbie Allen, and some of her former dancers. Photo by Susy Miller.

Choreography legend Joe Tremaine was on hand, as usual, to give-out his namesake Legacy Award, which honors people who have changed the face of dance. This year’s recipient was the glorious Debbie Allen. To help celebrate her, young dancers from her Debbie Allen Dance Academy graced us with a number from her Hot Chocolate Nutcracker, which I hope to finally see this year. (On a side note, perhaps even more impressive than her many show business accomplishments is Debbie’s thirty-four-year marriage to former Laker Norm Nixon! That’s an eternity in basketball players terms!!!)

A scene from Debbie Allen’s Hot Chocolate Nutcracker, performed in the tribute to her that night. Photo by Susy MIller.

One highlight of the night for me was young dancers Alyssa Allen and Jake Tribus, who are students at the Glorya Kaufman School of Dance, doing a pas de deux choreographed by uber-thinker-outside-all-the-boxes Sonya Tayeh; it actually made the crowd gasp several times–it was that beautiful, creative, and well-danced. (That’s them in Susy Miller’s photo at the top of this page.) 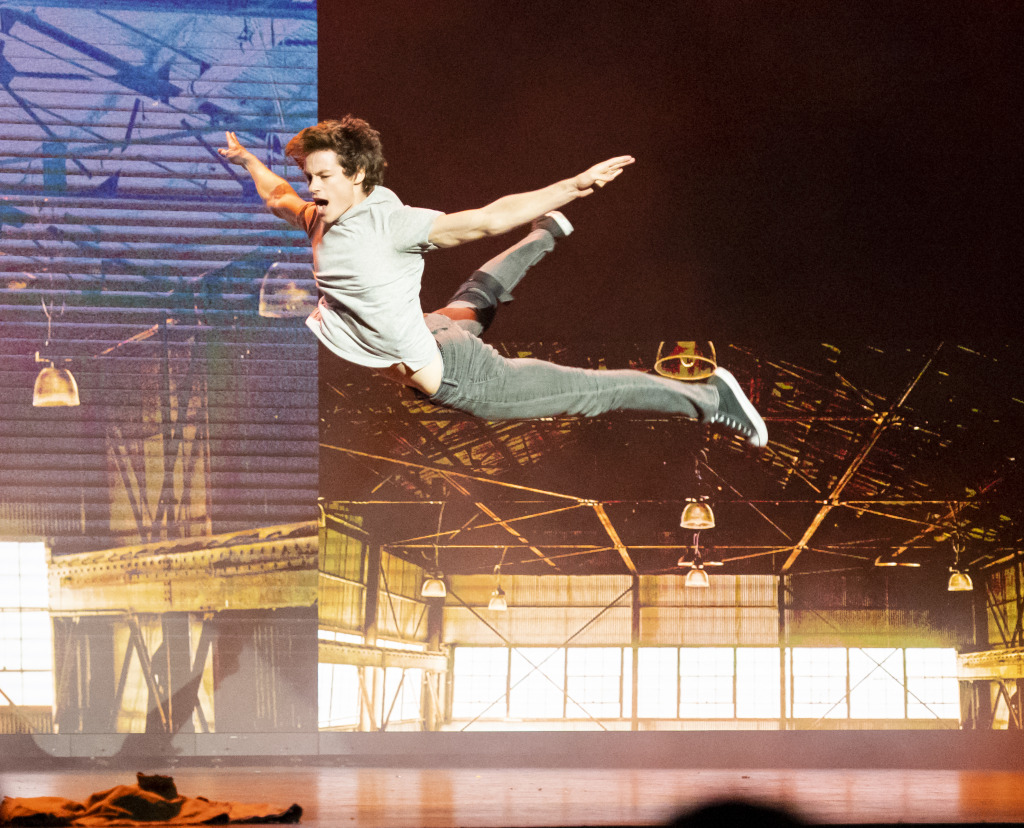 Kyle Allen. Even though I witnessed this magic with my own eyes, I’m still in disbelief! Wow!!! Photo by Susy MIller.

Another highlight was a solo by Kyle Allen, with choreo by Jade Hale-Christofi, which made it look as though he was flying…several times. I really could not believe what I was seeing right in front of me!

Blake McGrath standing up in the center. Photo by Susy MIller.

And then something interesting happened—a group performed the same dance they did in Blake McGrath’s music video, for which choreographer Tessandra Chavez won a Choreo Award that night. It was fun to see Blake perform live shortly after seeing a clip of him doing the same steps on film. It was a video come to life! Very powerful stuff there. By the way—Blake is from Mississauga, Ontario, Canada, a city that’s special to me because Mr. X and I lived there for awhile when he was starring in a play there. So that made me an instant fan of Blake’s even before I saw him dance. And then—wow! I was very impressed with it all. 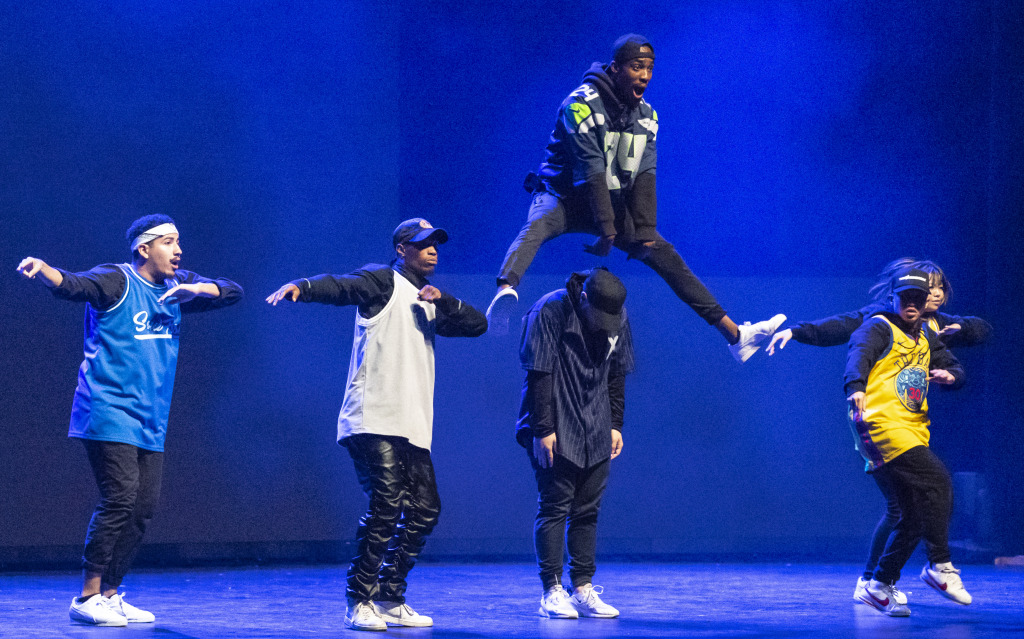 The last performers of the night were World of Dance runners-up, hip-hop group S-Rank. As good as they looked on TV, they’re soooo much more dynamic in person! I loved them! 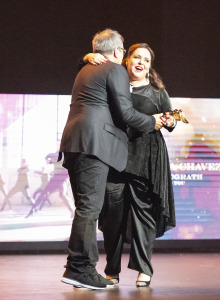 Here’s something that amused me about the World Choreography Awards presentation– even though the actual show started sort-of late, that tardiness wound-up not mattering much because…dancers are not talkers–they express themselves through movement. Hence, short speeches!

One thing the entire audience appeared to appreciate is that several speakers reminded us to vote this Tuesday. But when people implore others to vote nowadays, I always add…only if you’re a Democrat, please!!! The rest of you can stay home!

But don’t stay home from attending next year’s World Choreography Awards, or, as you just read, you’ll really be missing out. (The public is invited.) I know that I’ll be the first in line to laud these beautiful beings once again, so I hope to see you all there.

For a list of the 2018 winners, and to get all the info you’ll need for 2019, just click here: www.worldchoreographyawards.com.