My regular readers and viewers probably know by now that I ran away and joined the circus as a teen-ager. (No joke.) And, though it was not my classiest moment in life, I still always love the circus in general. 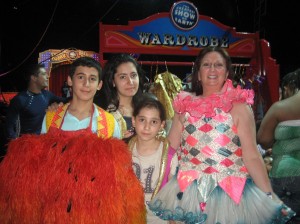 So, when I found out that there was actually a Ringling Bros. and Barnum and Bailey edition in my hometown of Brooklyn, New York this summer, I couldn’t wait to go.

Seriously, I think that this was the best circus I’ve ever seen, including the one that I was in!!! And to think that it was right in Coney Island!!! There’s something about this place that is so easy. I felt like I was going into my backyard, and it magically had a circus in it.

I took kids of all ages, (9, 12, 18, and 24–ME!), and seriously, a great time was had by all. (I know other over-20s pals who went and loved it, too.) We got there an hour and a half before show time, because they let the entire audience visit the outdoor Animal Open House and then participate in the in-the-ring All Access Pre-Show, which begins one hour prior to the start, and allows every ticket holder to mingle with the performers, and even learn some tricks from them!

It was an intimate one-ring-er, and we got to see everything up-close and personal, which could be done from all seats, basically. Having just the one-ring made it easier to concentrate on each act, without having to look around to see what the other rings were presenting.

And there were some acts that I’ve never, ever seen before, like an arrow-shooting one and Justin Case, a clown performing multiple bicycle tricks. He appeared to be one of the highlights of the show for the whole audience. And even with the pared-down size of the presentation, we got to see an elephant act and a tiger one, too.

The acrobats closed the show and were stupendous. They were a different kind-of troupe, too, in that it was all cute Caucasian guys in their 20s, (most circus acrobats seem to be Asian nowadays), with one red-headed girl in a long white gown that added to the “wow” factor. (BTW–I’m not saying they were better than other ethnicities–just different than the norm. Diversity is always interesting.) They really energized us for the ride home.

I hope that Ringling Bros. has found a permanent home in Brooklyn. If so, I just may be moving back there, as well!!! (They may want to give my little mother the heads-up, though, in case she wants to vacate the premises in that eventuality!)