Trending
You are at:Home»CHARITY»CHARITY/EVENT: A STAR SHINES FOR SURVIVORS
By Karen Salkin on October 10, 2016 · CHARITY, EVENTS

A STAR SHINES FOR SURVIVORS

During this period of the Jewish New Year, culminating in the highest holy day, Yom Kippur, which begins tomorrow night, this worthwhile event I’m about to share with you is especially relevant. 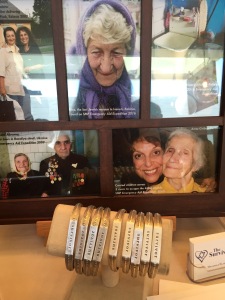 Who doesn’t love jewelry and hate the holocaust? So, this afternoon cocktail fete, A Star Shines For Survivors, to raise funds for survivors of that blight on history, (by selling a specially-designed bracelet,) was for everyone.

It was held at jewelry designer Dominique Cohen’s Beverly Hills boutique, where she debuted the Survivor Bracelet.

It’s all part of The Survivor Mitzvah Project, which is a humanitarian effort that aids Holocaust survivors who are in desperate need of…everything!

Zane Busby, the founder of The Survivor Mitzvah Project, explained “These men and women, now in their eighties and nineties, are ill, isolated, and lack the means to buy food, medicine, heat, and shelter. They are in urgent need.” I love a person who does good in his or her life. Zane is truly helping this particular group, which, I’m sad to say, most of the world has forgotten about. 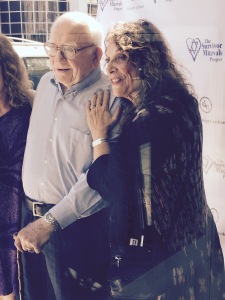 So when I found-out that two of my pals whom I admire greatly, Valerie Harper and Elliott Gould, were involved, I knew I had to go support the cause, as well.

Those two weren’t there that day, but help-out in other ways, such as doing PSAs for the organization. But I was thrilled to see my New Best Friend, former Access Hollywood host, the stunning Shaun Robinson. (We had just met the day before, under a tad different circumstance, but I already loved her!)

I also spent some time with Lou Grant himself, Ed Asner. I’m honored that he hit me on the butt with his cane! I mean it. 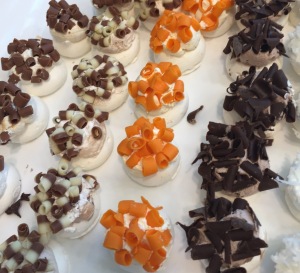 Mini Pavlovas, some of the tiny treats. Photo by Karen Salkin.

And I was thrilled to meet the abovementioned Zane Buzby. (Mr. X, who’s worked with her before, said she has “the classic show business name” because she’s probably the only person whose full name has two “z”s!) I recognized her right away from tons of TV shows, and I was touched when she and her lovely beau, Conan Berkeley, told me that they were fans of my now-departed TV show, Karen’s Restaurant Revue. I love being part of a mutual admiration society, especially a show biz one!

The boutique was packed the entire time, with many kind people. There was champagne flowing at all times, and sweet treats, courtesy of the near-by Bo Nuage patisserie, were being constantly served by an amiable wait staff. Everyone mingled nicely, and listened attentively when Zane did her brief video presentation. 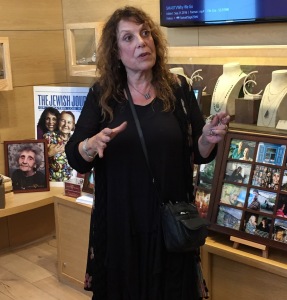 This is how the literature described the Survivor Bracelet: “[It] symbolizes the ideal of harmonious coexistence between all peoples. Two diamond accents represent the triumph of good over evil through the power of compassion. The name of a survivor will be engraved on each bracelet as a symbol of universal connectivity. No two bracelets will have the same name.”

When you reflect on the horrors those holocaust survivors went through, please keep in mind how lucky we all are now. And always remember–there but for the grace of God go I.

You can, and should, learn more, about the project and entire organization, here: www.survivormitzvah.org.