I’ve been re-miss on reporting my celebrity sightings around town this year, mainly because I haven’t been around town much myself; I’ve spent the better part of 2010 so far stuck in the house with back issues. But recently I’ve been back up and at ’em, so here are the highlights of 2010 to date, in reverse order: 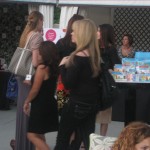 The tall drink of water, with her back to the camera, is Kerri Walsh.

5/4/10 Kerri Walsh, gold medalist in beach volleyball at the last two Olympics, (with her partner, Misty May) at the Bump It Up pregnancy party at the W Hotel in Westwood. I know she’s preggers, but I couldn’t even see a bump. Must be because she’s so in shape.

4/28/10 Gossip Girl star Ed Westwick at the opening of The 39 Steps at the AhmansonTheatre, sporting high water babies. It must be a British style. 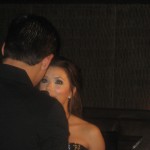 Eva Longoria chatting with Mario Lopez at her party. Why do I keep taking pix of people's backs???

4/27/10 Eva Longoria’s perfume launch party at her Hollywood eatery, Beso, was rife with her celeb pals. It was most interesting to see Mario Lopez and Heidi Klum, both rocking slicked-back ’dos.

4/25/10 I sat next to him once before at this theatre, so I wasn’t shocked to see Ben McKenzie, (now of Southland, but forever of The OC in my heart) in the lobby of the Mark Taper Forum at intermission of opening night of Bengal Tiger. As cute as ever, I’m happy to report. Too bad his mom wasn’t there with a candy bar, like she was last time, when she told him to “give the girls some candy, honey,” which I happily accepted! More to receive it from him than for the actual candy!

4/21/10 I was surprised that I was excited to see Kym Johnson, reigning professional champion of Dancing With The Stars (with her partner Donnie Osmond) at the opening night of Chicago at the Pantages Theatre. She looked great! Fabulous legs, young-looking boyfriend. I don’t think she came to the after-party, though. Maybe she just didn’t want to depress the rest of us mere mortal gals. 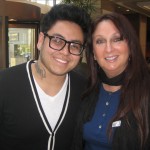 4/16/10 Though not quite a “celebrity,” I was happy to meet Andrew Garcia from this season’s American Idol. Mr. X and I both thought that he should have lasted way longer than he did, but we’re happy for him that he gets to go on tour this summer with Crystal, Big Mike, cute Casey, and the no-talents who aren’t those four.

1/14/10 MY BIRTHDAY! And just whom did I sit right next to at Dan Tana’s? One of my top crushes, Nick Lachey!!! He was as adorable as ever and dining with a slightly older woman, so I could have had a chance with him! (It was probably just his agent , so don’t get excited.) I loved sneaking peeks at him even more than my pasta. So, Happy Birthday to me!