I just realized that it’s been quite the uber-long time since my previous Celeb Sightings column. That’s because there were so many other events to tell you about along the way!

The end of May was a juicy one, but conversely, the beginning of June was sparse. And then it picked-up from there and has been really fun ever since!

So let’s get right to them, shall we?

5/22/19  Star of the most angst-filled summer series, The Red Line, Noah Wiley at opening night of one of the worst shows I’ve ever seen, Happy Days, at the Mark Taper Forum in downtown LA. He’s so much shorter than I would have expected. (You can read my review of that awful play here: itsnotaboutme.tv/news/happy-days.)

5/29/19  Comic actor John C. Reilly in Gather, a show I have a feeling he put together himself. I know he was in the show, (as opposed to being in the audience,) which I never report here, (because I see so many famous people in shows,) but it was such an intimate theatre, and he was right there on the floor in front of my eyes, so I’m making an exception this time. (Here’s my review of that show: itsnotaboutme.tv/news/theatre-gather-surprising-stories-other-mischief.)

5/30/19  Mindy Kaling in downtown LA at the premiere of her flop movie with Emma Thompson, Late Night. I have no idea how that woman is a star. She’s not attractive nor funny. I just don’t get it. And the movie is so poorly written. By her! My friend and I laughed just once. At a supposed comedy!!! I’m left scratching my head over how this one was green-lit to be made, and I totally get why it was a bomb.

5/31/19  Mike Tyson supporting his pal, retired basketball player Ron Artest, at the premiere of the documentary, Quiet Storm: The Ron Artest Story, which is about Ron’s struggle with mental illness. (For my review of that whole special evening, just click here: itsnotaboutme.tv/news/movieparty-quiet-storm-the-ron-artest-story-premiere.) 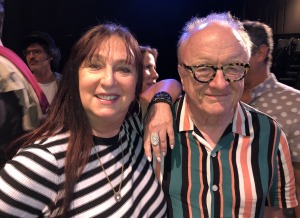 6/11/19 Former British Invasion-era pop star, (and also current music producer,) Peter Asher, (of Peter and Gordon fame,) at a reading of some comedy vignettes in Venice. (But his much more important claim to fame, in my eyes, is that he was almost Paul McCartney’s bro-in-law! His sister, actress Jane Asher, was Paul’s main squeeze way back in the day.) If someone had not told me who he was, I would have never recognized him! 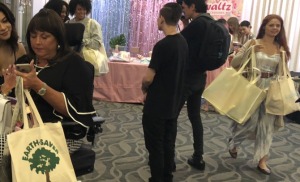 Abby Lee Miller on the left and Anna Trebunskaya on the very right. Photo by Karen Salkin.

6/13/19  The Secret Room Events Gift Lounge in honor of the MTV Movie Awards was filled with dance show peeps. I give Abby Lee Miller, of the reality  TV show Dance Moms, tons of credit for coming out in a wheelchair, and I have to say—she seemed pleasant to everyone. I saw her smiling every time our paths crossed. And I was happy that adorable Anna Trebunskaya, one of the pro dancers on Dancing With The Stars, remembered me from us bonding over self-tanner at Secret Room’s previous event. (For all the deets of this fun event, click here: itsnotaboutme.tv/news/gift-lounge-secret-room-events-style-lounge-in-honor-of-the-2019-mtv-movie-tv-awards.)

6/19/19  This was a really fun one! Mr. X and I ran right into (almost literally) my good pal Elliott Gould at a strip mall in WeHo. It turns-out that he was just leaving the eatery that Mr. X and I were going to for the first time ever! How’s that for kismet?!

6/29/19  The opening night audience of the play, Good Boys, in Pasadena, was sprinkled with several TV series actors who were there to support their cast-mates. Most notable was Riverdale’s Madchen Amick. (But you can read about the rest of them, and my review of that odd play, right here: itsnotaboutme.tv/news/theatre-good-boys.)

7/4/19  New hottest comedian of the moment, (and host of the upcoming MTV Music Awards,) Sebastian Maniscalco, in Westwood at our little local Fourth of July event. We talked to him for a minute, but, strangely, he wasn’t amusing in person. He was nice enough, though. 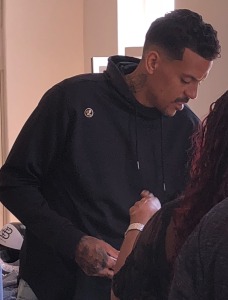 7/8/19  Former NBA player, Matt Barnes, in downtown LA, at the CannaSpa Gifting Suite in honor of the ESPYs. He looked to be having a great time, meeting and greeting. (You can read all about that event here: itsnotaboutme.tv/news/gifting-suite-cannaspa-gifting-suite-in-honor-of-the-2019-espys.) 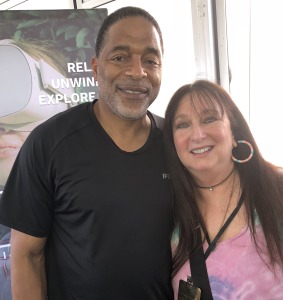 7/9/19  Old school Laker Norm Nixon at GBK’s ESPYs Gifting Lounge in West Hollywood. We chatted about his lovely and talented wife, Debbie Allen, for awhile. (You can find-out what else went on there right here: itsnotaboutme.tv/news/gifting-lounge-gbks-2019-espys-gifting-lounge.)

7/10/19  Laura Bell Bundy in downtown LA at the Ahmanson Theatre for the opening night of The Play That Goes Wrong. I still feel bad that, because of the heaviest traffic I’ve ever had the misfortune to be in, I got to the venue too late to say a quick hello to several of my show biz pals on the way in. But I was happy to spy the always-fabulous LBB as I rushed to my seat. (There’s so much to say about that comedic production, and I do say all of it right here: itsnotaboutme.tv/news/theatre-the-play-that-goes-wrong.) 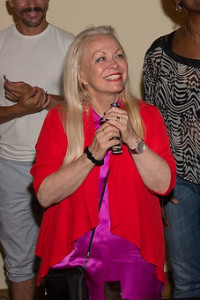 7/15/19 Oscar-nominated actress, Jacki Weaver, at the party portion of the kick-off for the Short and Sweet Festival in Hollywood. She was there to support her fellow Aussie whose brainchild this event is. 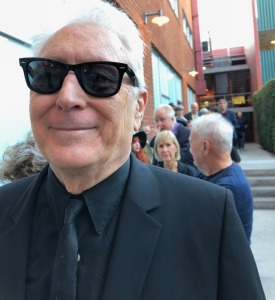 Ray Buktenica at the front of the line, and Jason Alexander, (the bald man next to the window back there.) Photo by Karen Salkin.

7/19/19 This was a trifecta of talented men! Sitcom actors Ray Buktenica and Jason Alexander at the opening night of Ben Vereen’s cabaret show in Hollywood. I felt a bit bad for Jason that even he had to stand in line, waiting for the place to open. And I loved meeting Ben in person post-show because I had interviewed him a few weeks before by phone. (Here are the highlights of that fun convo: itsnotaboutme.tv/news/upcomingmusic-ben-vereen-at-the-catalina-jazz-club.) [The pic of Karen Salkin and Ben Vereen is at the top of this page. Photo by Mr. X.] 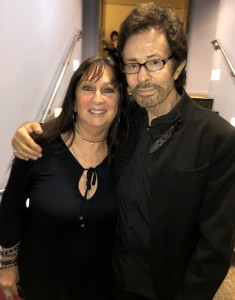 7/26/19 Academy Award-winning actor George Chakiris in Thousand Oaks at the opening night of a regional theatre’s production of West Side Story. I’ve known him a tiny bit for years, and I always love seeing him out and about, especially to support someone else in the role he won that Oscar for in the movie version of this iconic musical. (Here’s my glowing review of that whole evening: itsnotaboutme.tv/news/theatre-west-side-story.) 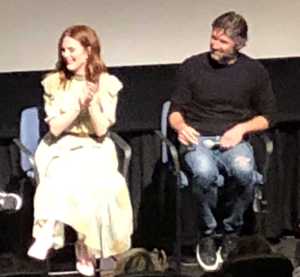 7/30/19 Julianne Moore speaking in West LA, (along with her husband, Bart Freundlich, the director of the movie,) after an industry screening of their interesting new film, After The Wedding. It was so cute that he kept calling her “Julie” instead of the full “Julianne.” I didn’t even know about whom he was speaking at first! Seriously! 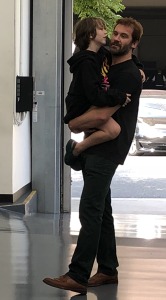 7/31/19 British actor Clive Standen, (whom I recognized because I was most likely the only viewer of his recent TV series, Taken,) with a woman and child, (who I assume are his wife and progeny, but you really never know,) at the Audi dealership in Beverly Hills.

8/2/19 Vanessa Lachey, who’s a recurring guest on the new probable-flop TV series, BH90210, (and more importantly, the wife of my former celebrity crush Nick Lachey,) shopping at just a regular Ralph’s supermarket, in the Valley, no less!

And that’s it for now. I can’t wait to share more of my always-eclectic Celeb Sightings with you in the Fall!