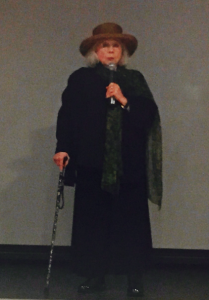 Piper Laurie. Photo by Karen Salkin, as is the big one of Michelle Kwan at the top of this page.

What an eclectic group of celebrities this is!  There’s something for everyone—movie stars, TV actors, athletes, dancers, singers, married couples, Brits, Americans, and even a rapper.  And they go from one of the most famous women in the world (on May 1) to an Olympic medalist (on May 16) to an oldie-but-goodie, right below.

So, without further ado, let’s get right to them!

4/7/18 Oscar-nominated actress Piper Laurie introducing the documentary, A Classy Broad, about her good pal, Marcia Nasitir, at a very private screening in Burbank.  (I saw Piper on an episode of MacGyver a couple of days later, and she was wearing a very similar outfit to the one she had on that day—same style hat, coat, and scarf.  I guess she found her grown-up look, and is sticking to it!) (Here’s my review of that entire event: itsnotaboutme.tv/news/movie-reviewevent-a-classy-broad.) 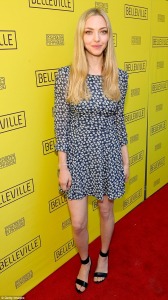 4/22/18  Petite movie actress Amanda Seyfried supporting her husband, Thomas Sadowski, (along with his Life In Pieces castmate Colin Hanks,) for his opening night of Belleville at the Pasadena Playhouse.  (Here’s my review of this awful show, which you are lucky has already closed so you won’t be tempted by these celebrities to see it: itsnotaboutme.tv/news/theatre-belleville.)

4/28/18  Dueling dance show judges, Nigel Lythgoe (of So You Think You Can Dance,) and Bruno Tonioli (of Dancing With The Stars,) at the Wallis in Beverly Hills for BritWeek’s A Shakespeare Jubilee.  Bruno was actually sitting in the audience with Nigel’s daughter-in-law, Becky, while Nigel stole the show on stage. (My brief review of it is in here: itsnotaboutme.tv/news/special-dayupcomingtheatregossiphealthbasketball-celebrating-may-day-2018-with-spring-odds-and-ends.) 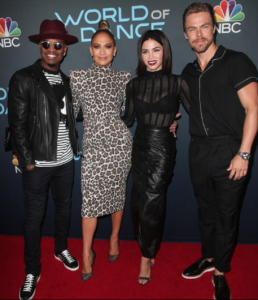 5/1/18  The entire cast of World of Dance at the TV Academy in North Hollywood.  Jennifer Lopez, Derek Hough, Ne-Yo, and Jenna Dewan (minus the “Tatum” since the recent divorce,) did a panel discussion of their show, hoping to get an Emmy nomination out of feeding the assemblage a sumptuous buffet at the afterparty!!!

5/6/18  The Blind Side star, Quinton Aaron, at Masters of Taste at the Rose Bowl in Pasadena.  He seemed to be enjoying all the treats there almost as much as I did!  (Here are the rest of the scoops on that event: itsnotaboutme.tv/news/diningeventcharity-masters-of-taste-2018. ) 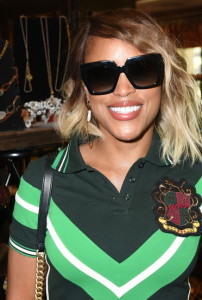 5/7/18  Rapper and actress Eve at Doris Bergman’s Gratitude Gifting Lounge for the George Lopez Gold Classic in Burbank.  (You can read all about that event here: itsnotaboutme.tv/news/gifting-lounge-doris-bergmans-gratitude-gifting-lounge-for-the-george-lopez-2018-celebrity-golf-classic.)

P 5/16/18  Figure skating multiple World Champion Michelle Kwan, looking the prettiest ever, at opening night of Soft Power at the Ahmanson Theatre in downtown LA.  The show is a fabulous comedy about US-China relations, written by Chinese-American playwright David Henry Hwang, who sat right across the aisle from me, so I got to enjoy his reactions to the show along with my own.  (Here’s my glowing review of that wonderful show: itsnotaboutme.tv/news/theatre-soft-power.) [Note: The big picture at the top of this page is Michelle Kwan.  Photo by Karen Salkin.] 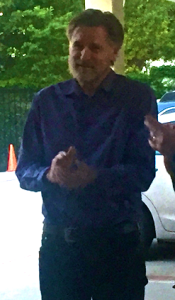 5/18/18  Actor Bill Pullman at a little theatre in Burbank for the opening night of one of the worst shows I’ve ever seen.  He must have known someone in the cast because no one would have sat through that torture otherwise.  He was sitting right in front of me, and didn’t seem to be enjoying it, either.

5/21/18  James Franco’s supportive sister-in-law, cute actress Allison Brie, speaking as part of the most boring animation panel, at a studio in Hollywood.

5/22/18  Dance icons Debbie Allen and Nigel Lythgoe (that guy gets around, doesn’t he?,) at a super-private cocktail party at The Wallis in Beverly Hills, the theatre that brings us the most dance of any in town.  (You can read all about that event right here next week.)