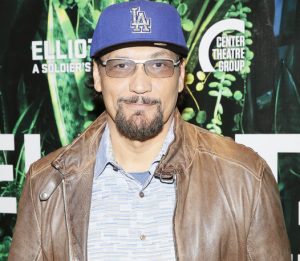 This is a really interesting group of Celeb Sightings. In February and March, I wasn’t out and about as much as I usually am. See if you can guess why! Ready? Because of the Olympics and March Madness, of course! So, I didn’t see as many celebrities as I usually do over the course of a couple of months.

But the ones I did spy are a juicy, very unusual crop. I’ve never seen half of this group in person before. The penulitmate one is one of my all-time favorite celeb experiences, but no cheating—please read them all in order, and build-up to that one! And have fun. Here we go: 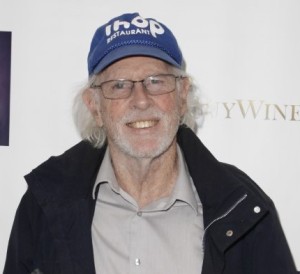 2/3/18  Long-time television series star Jimmy Smits at the opening night of the play Elliot, A Soldier’s Fugue in Culver City.  (Here’s my review of that show: itsnotaboutme.tv/news/theatre-elliot-a-soldiers-fugue.)

2/24/18 Oscar nominee Bruce Dern having lunch in West Hollywood with none other than…moi!  (You can read the highlight of our convo here:  itsnotaboutme.tv/news/gifting-lounge-doris-bergmans-valentine-romance-oscar-style-lounge-party.)

3/6/18 Handsome Rupert Friend at the downtown LA premiere of his latest film, The Death of Stalin. His beauty is the only good thing about that film!!!

3/12/18 Billy Bob Thornton, having lunch at a Century City eatery of which I’m not a fan.  (But a pal forces me to go there with her every now and then.)

3/13/18  Jon Voight and his son (Angelina Jolie’s weird-ish brother) at the Sherman Oaks mall, which I thought was a tad strange. 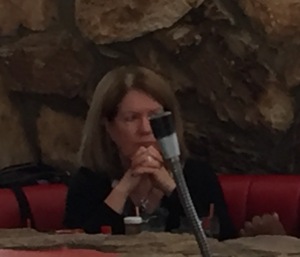 Mary Hart (with a diner microphone in front of her face! Sorry about that.) Photo by Karen Salkin.

3/19/18 This is such an out-of-the-blue one, which I always love. Former Entertainment Tonight anchor, Mary Hart, at…Pann’s Coffee Shop in Inglewood, of all places!!! I had to look several times to make sure it was, indeed, she, and it was! She was with a disparate trio, and I could not for the life of me figure out who those four all were to each other. (That same thing used to happen to me when I’d go out to eat with several members of my audience when I was still doing my TV show, Karen’s Restaurant Revue.) As weird as it was that Mary Hart would be in a place like that, you may also be wondering what I was doing there, n’est pas? In all my years of living in LA, since I was a teen-ager, I had never been to Pann’s! But a pal was taking me to lunch on a day that she also wanted to photograph the iconic Randy’s Donut sign, so I wanted to show her also interesting architecture in that area, and came up with Pann’s! So it was fun for me, as well, to go to a famous place in town that I had never visited before! 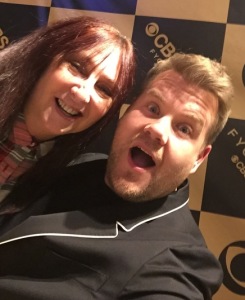 Karen Salkin and James Corden. We finally found one thing that James Corden cannot do–he’s a terrible photographer! Photo by…James Corden! (The big one at the top of the page, where James Corden loves the story Karen Salkin is telling him, is by Lisa Politz.)

3/26/18 This was my favorite recent Celeb Sighting! It was actually much more than a sighting—it was a meeting!!! James Corden did a Q-and-A at the Television Academy in North Hollywood. He’s not only hilarious, he’s also smart, nice, hip, and show biz savvy! And adorable!!! And then, at the post-talk reception, I got to meet him! He took my phone from me and…shot the selfies himself!!! OMG! I was so happy to tell him a story about the first time my friend Betsy and I saw him do a bit on the Tonys. As you can tell from the photo, he was amused by what I was saying. (Thank goodness, because that little tale could have gone either way!)

4/5/18 The still-stunning Jaclyn Smith at The Wallis in Beverly Hills. And in the ladies room, of all places! (But it’s the most aesthetically-pleasing and classy restroom ever, so it’s not unusual for women to linger and chat in there.) I heard a beautiful speaking voice that sounded somewhat familiar, so I looked over and saw that it was Jaclyn. I was glad to see her because we were at the theatre for a modern dance show, which celebrities usually don’t attend. So, good for Jaclyn to be there! (My review of the excellent show will be up early next week.)

I’m happy to end this rendition of my Celeb Sightings so strongly! I hope that you all enjoyed reading about them as much as I did spotting them for you!