This is my first full Celeb Sightings of the year! And boy, did it start off with a bang, as you will see below!

I like that it’s a fun mix of young and old, big movie stars and some that are perhaps known to only their fan base. No matter who they are, I realized that I’m sort-of proud of myself for having such wide celebrity knowledge! So, tests yourselves, as well, as you read along.

Here are my January 2018 most interesting celebrity sightings: 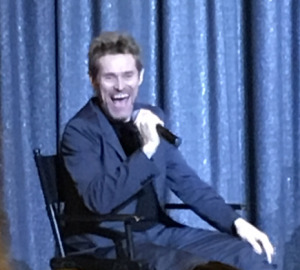 1/5/18 JLo and ARod! This was one of my biggest sightings ever!  As my friend and I were on the way to a Golden Globes daytime event, we passed a gorgeous maroon convertible Bentley in Beverly Hills, so we paid extra attention to its inhabitants.  Alex Rodriguez was behind the wheel and Jennifer Lopez was standing outside it.

1/5/18 Willem Defoe speaking in West Hollywood after one of the final industry screenings of his film, The Florida Project. (My mini review of the movie is here: itsnotaboutme.tv/news/movie-reviewsawards-show-2018-mini-movie-reviews-part-ii-and-sag-awards-predictions.) 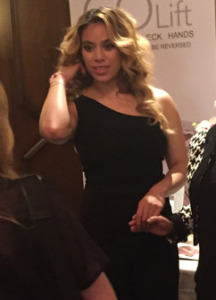 1/6/18  Girl group Fifth Harmony member, Dinah Jane, in Beverly Hills at the GBK gifting lounge for the Golden Globes. (You can read about that whole event here: itsnotaboutme.tv/news/gifting-lounge-gbks-pre-golden-globes-gift-lounge-2018.)

1/9/18 Vicky Krieps, the female lead in Phantom Thread, just strolling slowly in the lobby of the theatre in West LA that had just screened her film. She was on the way to do a Q-and-A for it, but I was too disgusted with the movie to stay and hear what she had to say. (You can read my mini review of it on the same page as The Florida Project review. The link to it is in the Willem Defoe section above.) 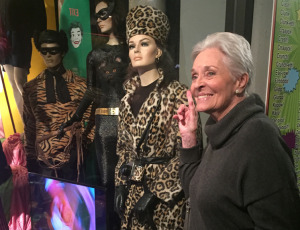 Lee Meriwether, standing next to a mannequin of her character. Photo by Karen Salkin.

1/10/18 Not exactly household names anymore, but former Batman co-stars Burt Ward (who played Robin,) and Lee Meriwether, (one of the ladies who played Catwoman, and also a former Miss America, which is way more important to me, by the way,) at the opening night fete for the Batman exhibit at The Hollywood Museum. (You can read all about it here: itsnotaboutme.tv/news/partyart-party-for-the-opening-of-the-batman-exhibit-at-the-hollywood-museum.) 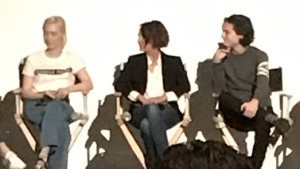 Saoirse Ronan, Laurie Metcalfe, and Timothy Chalamet. Photo by Mr. X. The big pic at the top of the page is of Saoirse Ronan, (the blonde in the middle with her back to us,) kindly signing autographs for some fans. That photo is by Karen Salkin.

1/13/18 Saoirse Ronan, Laurie Metcalfe, and Timothy Chalamet along with a few other actors from Lady Bird, speaking after a big industry screening of their film in Hollywood. Afterwards, Saoirse proved herself to be the darling girl I always regard her as. Here’s why: When she was leaving through the back door, where I was parked right next to her driver, Saoirse strode right past my car (and hers,) over to the waiting fans who were desperate for autographs and selfies. And you could tell she didn’t do it for anyone to think she’s nice; she just is nice. I have never seen any other celebrity do that in all my years of going to that particular screening room; the man who runs the theatre, and always helps the celebs to their cars, told me this was only the second time he had ever seen it, either! (My mini review of that film is here: itsnotaboutme.tv/news/movie-reviewsawards-show-2018-mini-movie-reviews-part-ii-and-sag-awards-predictions.) 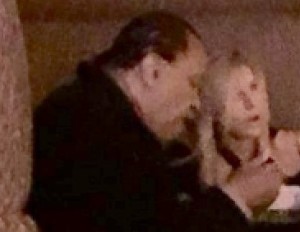 1/20/18  Billy Dee Williams at a famous jazz club/restaurant that I frequent in Bel-Air. He and his female companion appeared to be enjoying his dinner, while others were just grooving to the jazzy music.