This is my final Celeb Sightings of 2017, so whomever I see in the second half of this month will be in the first CS of 2018. 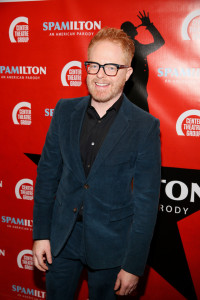 11/12/17 Perennial LA theatre audience member, Jesse Tyler Ferguson, at the opening night party for Spamilton in Culver City. (You can read my review of the show and whole evening here: itsnotaboutme.tv/news/theatre-spamilton.)

11/17/17 Prolific composer, and my pal, Richard Sherman, at the opening night of his new musical, Levi, in Hollywood. (Here’s my review of that fun show: itsnotaboutme.tv/news/theatre-levi-the-musical.)

11/24/17 I love this one—the whole Benjamin clan, (show biz parents Richard Benjamin and Paula Prentiss, and their daughter,) out to support son Ross who’s appearing in a play in West LA. (You can read my review of the play here: itsnotaboutme.tv/news/theatre-new-york-water.) 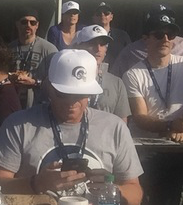 Joe Manganiello on the top left, James Van Der Beek on the extreme right, and creepy Gary Busey in the center, paying no attention whatsoever to the game. Photo by Karen Salkin.

11/26/17  One of the (mostly) motliest crews I’ve ever seen, in the VIP on-field suite at the Rams winning game over the Saints.  This is just some of the guys who joined me there, with a couple of nice ones peppered in: the biggest a-hole, by far, was Gary Busey, along with assorted members of his posse.  Entourage’s Kevin Dillon, whose creepy drunk girlfriend kept punching me in the back, wasn’t really a jerk; he just didn’t stop jawing with anyone and everyone he could, (including accidentally insulting national anthem singer, Brian McKnight, who sat right next to me up front, but he let it roll off his back–he told me that’s “just LA for you.” He was one of the nicer guests in there.)  On the interesting tip were Joe Manganiello, (there without his wife, Sofia Vergara,) J.B. Smoove, and Master P, (who seemed a lot better in person than he did when he was difficult on Dancing With The Stars back in the day.)  My two faves there, by far, were Dawson’s Creek’s James Van Der Beek, to whom I wish I had spoken to tell him how funny I think he is now, and darling Rhoda and Life Goes On star Ray Buktenica, who seemed to be enjoying himself videoing a lot of the proceedings! 11/28/17 Armie Hammer and Timothée Chalamet speaking after an industry screening of their awful film, Call Me By Your Name, in West LA. (Yes, I know that it’s winning all kinds of awards, but I really feel that it’s the Emperor’s New Clothes of this year’s crop of films.) Watch for my review in the next few weeks. I have so much negative to say about it that it just might merit one of my limited series YouTube videos!!!

12/1/17 Since Hugh Hefner had recently died, it was interesting to spy his old girlfriend, Barbi Benton, at the Taste of the Glen event in Beverly Glen. She looked awful—I still can’t figure-out why she would go to such a public event with no make-up on!!! 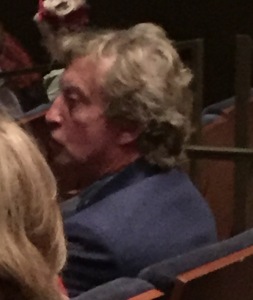 12/5/17 The hottest choreographer in the world right now, Mandy Moore, in Pasadena, in rehearsal for the latest Lythgoe Family Panto, and being interviewed by none other than…moi! She was great. (You can read all about our time together here: itsnotaboutme.tv/news/upcomingtheatre-lythgoe-family-panto-previews.)

12/5/17 And then, very coincidentally, later that night, Nigel Lythgoe (of So You Think You Can Dance and American Idol fame,) sat right in front of me at a show in Beverly Hills! And to his credit, he led the standing ovation at the end. (Here’s the link to that review: itsnotaboutme.tv/news/theatre-the-heart-of-robin-hood.) 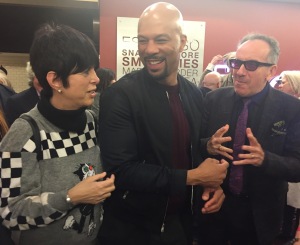 12/11/17 Common, Elvis Costello, Ryan Tedder of One Republic, Kenneth Branagh, Diane Warren, and more, discussing their songwriting for this year’s films, in Century City. I spoke with adorable Common for awhile at the post-event reception, and he asked where I’m from. When I responded with “Brooklyn in the house,” he told me that he had lived there for awhile, as well. I love that guy. His public speaking is always head and shoulders above the rest. There’s a special spark there. [Photo at the top is of Common and Karen Salkin, who was so excited to talk to the guy that she forgot how to look into the camera!]