Over the past two months, I’ve spied a very eclectic group of celebs around Los Angeles, many, shockingly, whom I’ve never seen in person before! The one on May 8th is one of my faves of all time, (as is the vehicle, not the celebrity, on June 3rd.) And I almost passed-out to speak with the one on June 13th, so please don’t judge what I look like in the photo with him! 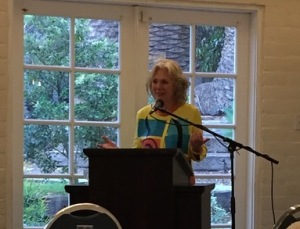 4/9/16 Original Dark Shadows actress, (and my pal,) Kathryn Leigh Scott, in Hollywood at the launch party for her new book about the horrific death of her beloved husband, Los Angeles Magazine publisher, Geoff Miller. I’m glad that, as painful as writing it may have been for her, she’s letting everyone know of the little known disease that felled my lovely friend. 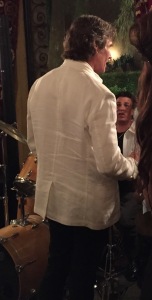 Ronn Moss. Sorry I got just the back of him. But even that’s handsome! Photo by Karen Salkin.

4/13/16 Corbin Bleu,of High School Musical fame, (and also runner-up on Season 17 of Dancing With The Stars, though he deserved the win,) at opening night of Kinky Boots at the Pantages Theatre in Hollywood. (You can read my review of that show here: itsnotaboutme.tv/news/theatre-kinky-boots.)

4/22/16 Ronn Moss, who starred on The Bold and the Beautiful for a quarter of a century(!), playing is old music, (from when he was in the ‘70s group, Player,) at fashion designer Sue Wong‘s birthday fete at her home, The Cedars, in Los Feliz. I used to know him slightly, but hadn’t seen him in years. I had never realized it before, but that is is one gorgeous hunk of man! (You can read my review of that whole soiree here: itsnotaboutme.tv/news/party-sue-wongs-birthday-soiree.) 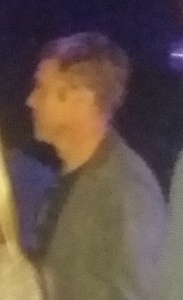 4/30/16 Andra Day, doing an uber-private concert in a cocktail lounge setting at a studio in Hollywood. While she’s not quite a big celebrity yet, she really should be! From her holiday commercial with Stevie Wonder alone! But I think her single, Rise Up, is helping to put her on the map, which she already deserved to be on. (To read more about this event, please click here: itsnotaboutme.tv/news/music-att-audience-network-concert-series.)

5/2/16  Two celebs for the price of one!  Chris Daughtry, performing an invitation-only private concert at a studio in Hollywood, while Ricky Schroeder stood right next to me in the VIP section.  What fun, all the way around! (To read more about this event, please click here: itsnotaboutme.tv/news/music-att-audience-network-concert-series.) 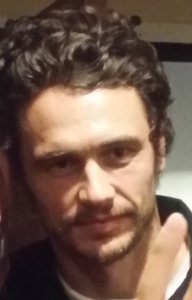 5/8/16  James Franco!  He moderated the Q-and-A after a screening of the very indie film, Those People, at the Arena Cinema in Hollywood.  It’s a tiny theatre to begin with, so no one was that far away from him, but I was impressed that he stayed afterwards for the wine reception in the garden, to support his NYU pal, Joey Kuhn, who wrote and directed it. (You can read my review of that movie, and the whole event, here: itsnotaboutme.tv/news/movie-reviewevent-those-people.) 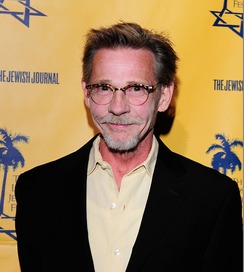 5/18/16  Dennis Christopher, the star of the classic film Breaking Away, at the opening night of the Jewish Film Festival in Beverly Hills. He was on stage, presenting an award to the Laemmle Family, of the movie theatre chain fame. (You can read my review of that gala here: itsnotaboutme.tv/news/event-los-angeles-jewish-film-festival-opening-night-gala.)

6/3/16  Jay Leno, driving one of his many classic cars, a Monteverdi, in Bel-Air.  I was driving along Mulholland Drive, right behind him. Right behind!  Like I was stalking him. (Although, if I was stalking someone, I think I’d be a bit more stealth about it.) When I first noticed him turning off from Sepulveda, I did so because of the car, not the driver.  Then I saw that distinguishable shock of thick, white hair, and the face that was the length of the entire window, and realized right away it was Jay.  (The big picture at the top of this page is of Jay Leno in his car.  Love that license plate!  Photo by Karen Salkin.) 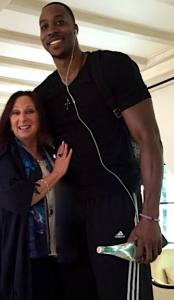 6/13/16 Dwight Howard at the Hotel Bel-Air in–where else?–Bel-Air! Duh. That made it worth it that I was up at the crack of dawn for a “beauty breakfast” there. And I’m happy to report that he was darling! Now I’m a fan again. So perhaps he’s in LA to discuss becoming a Laker or Clipper next season. Remember—you read it here first! 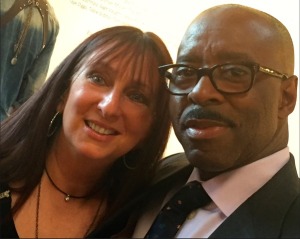 Courtney B. Vance and Karen Salkin. Photo by RozWolfPR.

6/15/16 Courtney B. Vance, Danica McKellar, and Minnie Driver at the Art For ALS event in Santa Monica. Courtney was lovely, and told me I was “too kind” when I effused over his recent performance as Johnnie Cochran in the mini-series about the OJ murders. (You can read all about that worthwhile event here: itsnotaboutme.tv/news/arteventcharity-art-for-als.) 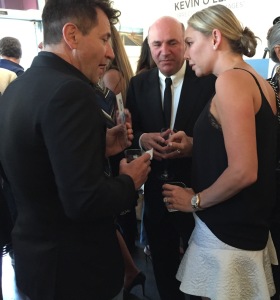 Robert Herjavec, Kevin O’Leary, and Kym Johnson. I think she’s pregnant, which you read here first! Look at her stomach, under her finger, if you can take your eyes off that rock! Photo by Karen Salkin.

6/17/16 Newly-engaged Dancing With The Stars couple Kym Johnson and Robert Herjavec at a charity event in a Beverly Hills art gallery. (He was even tinier than he appeared on that show. But he was rocking a cool new ’do.) They were there to support his fellow Shark Tank-er, Kevin O’Leary, who was hosting a charity event.