This is my longest Celeb Sightings ever!  That’s because so many other stories had to be written first (such as all the Oscars Gifting Suites ones.)  But all that waiting, as for a big present, only made this one juicier. 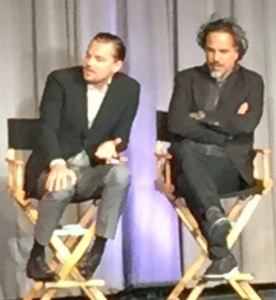 I have to begin with the final day of last year, not because it was such a big celebrity, but rather because I want to complain about the venue.

And please pay special attention to the three wonderful groups of sightings on January 9th. I can’t even believe that I had the good fortune of seeing so many Oscar winners on the same day!

Kind-of suprisingly, there was a dry spell for about a month from the middle of January until the middle of February, but then it all picked-up, big-time! 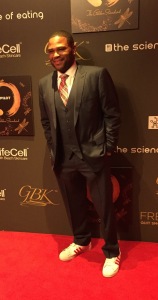 12/31/15 Comic actor Ken Davitian at Nate ‘n Al in Beverly Hills. I don’t think I would have even noticed him, except for the long wait. I stopped in to get chicken soup for the ailing Mr. X, and the service there was brutal! I called  the deli all the way there, for fifteen minutes, and the phone was busy the entire time.  Once I arrived at the counter, took a number, and realized just how very long the wait would be, (one woman ahead of me sampled every single item they had—I think she just wanted a free lunch,) I tried again to call my order in…from right in front of the phone order pick-up desk!  This time, they actually picked up the phone, but put me on hold for a half hour!!!  When they finally answered, they told me it would be forty-five minutes…for a quart of soup! I finally got it on the line instead, but even that was an ordeal. Oh yeah—so I kept looking around the room out of boredom, and that’s how I noticed Ken! 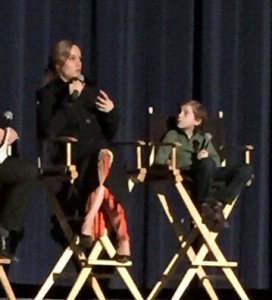 1/8/16 Anthony Anderson, of Black-ish fame, in Hollywood at the W Hotel.  We were both guests at the GBK gifting suite before the Golden Globes.

1/9/16 This was one of the juiciest celeb sightings days ever!!!   It featured Oscar winners galore!  First up was this year’s Best Actress winner, Brie Larson, along with her adorable Room co-star, Jacob Tremblay, speaking after an industry screening of their film in West Hollywood.  If she had any idea that she was about to win just about every major award out there, she sure did not give that inkling away.

1/9/16 Then we moved on to a different WeHo location, for perhaps my favorite Q-and-A ever!  Strike that–there is no “perhaps” about it!  After a screening of my favorite film of the year, The Revenant, I had the incredible great fortune of seeing (and hearing) eventual (and deserving) Best Oscar winner, Leonardo DiCaprio (duh,) and the winner of the past two Oscars for Best Director, Alejandro Innaritu.  What an unbelievable experience, for which I’m most grateful. 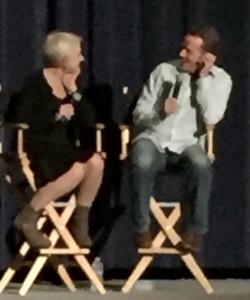 1/9/16 We ended the day with yet a third screening, also in West Hollywood!  This time, it was Trumbo, followed by a talk by Oscar nominee for this film, Bryan Cranston, and his co-star, the always-entertaining former Oscar winner, Helen Mirren.

1/15/16 At an opening night party for a show at the Sierra Madre Playhouse in–guess where–Sierra Madre, I caught-up with Bill Smitrovich, with whom I worked on Life Goes On.  (I got what was supposed to be a recurring role as the new girl in Patti Lupone’s office on the show, but the actor who played her boss, the adorable Ray Buktenica, left the next week to star in a new series, so the whole office scenario was written-out after my first show.)

2/10/16 There were lots of celeb sightings on opening night of An Act of God at the Ahmanson Theatre in downtown LA. They were all over the place! I spied American Idol‘s Constantine Maroulis on the way in, the incredible Sean Hayes was dazzling the crowd from the stage, and the backstage area post-show was quite abuzz. Jesse Tyler Ferguson and Sela Ward (with their significant others) were paying tribute to Sean, while I witnessed an emotional reunion between Rhoda actor, Ray Buktenica, and his old acting buddy, James Gleason, who was one of the two supporting players in the show. The whole night was a happy, upbeat one, no matter where you looked, which is the way every event should be! 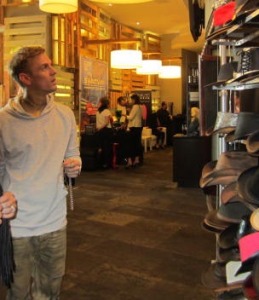 2/11/16 Model Nick Bateman in Art Lewin’s bespoke showroom in Beverly Hills. Art was fitting me for a custom-made man-tailored shirt, and in walked perhaps the most gorgeous guy I’ve ever seen! So, I went home and looked him up, and found-out just what a following he has. But guess what girls? (And, boys, too, I guess.) He’s much more gorgeous in person! No lie! Now I have to hope that we pick-up our clothing at the same time, too.

2/18/16 This eclectic group of blasts from the past–Mike Tyson ex, Robin Givens; Oscar winner (for West Side Story) George Chakiris; and Taxi‘s Marilu Henner–at Doris Bergman’s fabulous luncheon and gifting suite in west Hollywood.  A great (and flavorful) time was had by all. 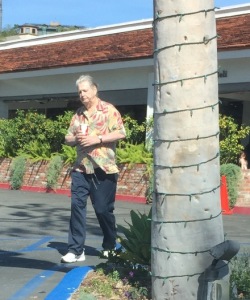 2/19/16 The dynamic comedy duo of Ray Romano and David Spade, performing in Las Vegas.  David performed for twenty minutes, then Ray did a forty minute set, and they finished-up with taking questions from the audience for a few minutes.  Good show, especially from my fourth row center seat!

2/22/16 John O’Hurley, whom I already knew slightly, standing at the same table as I was at the Wow Creations Oscar gifting suite in Beverly Hills.  We used it as a photo op.

2/24/16 Beach Boy Brian Wilson, one of the most important music business influencers of all time, in my opinion, coming out of an eatery in Bel-Air’s Beverly Glen Center, coffee in hand. 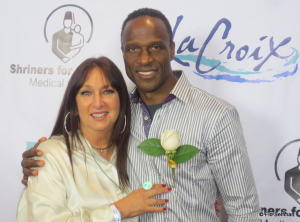 2/25/16 One of my all-time favorite athletes, former footballer Willie Gault, at Debbie Durkin’s Oscars week soiree at the Beverly Hilton  Hotel in Beverly Hills.  He told me that he still competes in sporting events, and I can see why–that man is a solid muscle!

2/26/16 Richard Lewis, just walking down Rodeo Drive in Beverly Hills.  I wonder where he was headed.

Elton John, blurry as he may be. Photo by Karen Salkin.

2/27/16 This was one of my favorite celeb sightings of all time.  I was pulling up to an event at a hotel in West Hollywood, and heard some good, very loud music coming from Sunset Blvd.  We walked over to see what was going on, and what do you know–it was a public outdoor concert by none other than Elton John!!!  It was the day before his famous Oscars party, so he wanted to thank the area by putting on this show on the site of the old iconic Tower Records.  He was fantastic; the only problem is that I haven’t been able to stop hearing Levon since then! (Did anyone ever find-out who Alvin Tostig is, by the way? I really should have asked Bernie Taupin when I met a few years ago!)

3/1/16 Two Dancing With The Stars pros, Emma Slater and Keo Motsepe, at Sofitel in West Hollywood. We were all attending a weirdo post-Oscars event that we were apparently all roped into showing up at.  Keo was surprisingly nice–he came right over to me and introduced himself!  I felt bad for always rooting against him. (But I am again this season because of his supposed “star” (yeah, right) partner.)

3/12/16 Investigative journalist Carl Bernstein walking into one of the eateries at the top of Beverly Glen in Bel-Air.

3/16/16 This duo is more working actors than true “celebrities,” but they’re so accomplished that I wanted to include them.  John Hawkes and Natalie Zea in West Hollywood speaking after a screening of their new movie, that was so not good enough to even mention here.