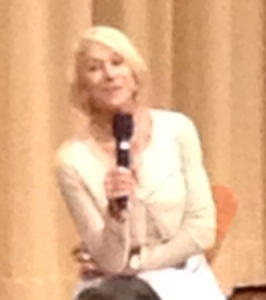 As I was typing the number of this edition of my Celeb Sightings, I thought it had to be wrong. How could I have written so many of these columns in just the six (plus) short years of INAM’s existence?! So, I looked back over them all, and was surprised to find-out that “44” is the correct number! That’s a whole lot of celebrities I’ve spied through the years!

So now here are these Autumn ones, beginning with two fun sightings on Halloween, although they had absolutely nothing to do with that special day.

10/31/15  Helen Mirren speaking after an industry screening of her brilliant film, Woman In Gold, in Hollywood.  She was as utterly charming as you would expect.

10/31/15  Pulling up to Miceli’s after the screening above, I was surprised to see Harry Hamlin just walking along Las Palmas with all the hoi polloi.  He was wearing the same blank expression that he always does in the media. And I was shocked to see that his hair was totally white!  I guess something had shocked him right before that.

11/1/15  Angela Bassett and her friend admired my plate of chicken, and asked me where I got it, at the after-party for the opening of the new musical, Breaking Through, at the Pasadena Playhouse. (Answer: From redwhite+bluezz, of course! You can read my review of that whole night right here: itsnotaboutme.tv/news/theatre-breaking-through.)

11/5/15 I hit the jackpot with this one! A friend introduced me to–get ready for it–Jake Gyllenhaal(!) while he busy chatting with–Jimmy Kimmel! It all went down at new-ish eatery Jon and Vinny’s in West Hollywood. Good one, right? 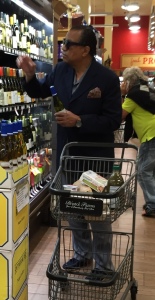 11/6/15  None other than Billy Dee Williams shopping by himself at the Bristol Farms in Beverly Hills, looking as handsome as ever.  It’s kind-of weird to see a bigger-than-life old school movie star just walking around pushing a shopping cart.  Even with me being so jaded, I still wouldn’t expect that.  (By the way–I hate giving that way over-priced store the publicity, but it’s interesting to know where Billy D was.)

11/10/15 The Biggest Loser doc, (and recent Charlie Sheen advocate,) Dr. Robert Huizenga, at his office in Beverly Hills! Who knew he had one?! I never gave much thought to his whereabouts, but if I had, I would have expected him to always be on the premises of the show’s medical headquarters, which appear to be in Toluca Lake, far from BH. Right outside his office was a photo of my most precious doctor ever, the late Bob Rosenfeld; then I noticed a young Dr. H there alongside him. Turns-out, they had worked together way back in the day. Now, if I ever bump into him, we’ll have something to dish, outside of my recently-acquired diabetes!!! [Note: Even though Dr. H isn’t a celeb, per se, I had already included him in here before his apprearance earlier this week on The Today Show by Charlie Sheen’s side for the bombshell HIV announcement. How prescient am I?!] 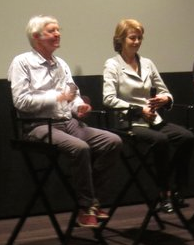 11/13/15 (Yes, I did go out on Friday the 13th!!! And with lovely results, too!) Tom Courtenay and Charlotte Rampling, at a screening of their new film, 45 Years, at the London Hotel in West Hollywood. The movie was a snooze-fest, (and actually felt like it was taking forty five years to watch it!,) but getting to see, and listen to, these two icons of British cinema, was a privilege. (One that I gave up seeing Ryan Gosling in person to witness! And I was satisfied with my choice.)

11/16/15 What do Paula Abdul and George Chakiris have in common? (Other than that they look the same age—because he looks thirty years younger than he is!!!) Dance, of course! And they both showed up, (on time, I might add,) to the Montalban Theatre in Hollywood for the World Choreography Awards. (George to present, Paula to win one, even at this late stage of her career!) And, as always, they were both uber-pleasant to everyone. (You can read all about it here early next week.)

11/19/15 The above-mentioned Jake Gyllenhaal, speaking after a screening of his boxing film, Southpaw, in Century City. It was exactly our two week anniversary of meeting! (That would sound stalker-esque except that, though he’s an excellent actor, and was lovely to me when we met, I’m not the least bit into him. I actually wrote it tongue in cheek.) His acting insights were very interesting.