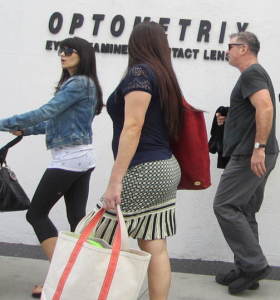 Hilaria Baldwin, pushing the baby carriage, some woman with them, Alec Baldwin. Photo by Alice Farinas.

This fun group of Celeb Sightings happened over just one month’s time, with February 21, the day before this year’s Oscars telecast, being a really big twenty-four hours, with sightings in three different arenas!

So, here they are, most with links to my more detailed write-ups of the events I spied them at:

2/6/15 Miles Brown, the cute little kid from Black-ish, at Red Carpet Events Lounge for the Golden Globes, at the W Hotel in Westwood Village. (For more on Miles’ actions there, click here: itsnotaboutme.tv/news/gifting-suite-red-carpet-events-la-style-lounge-gifting-suite-in-honor-of-the-grammy-awards-2015.)

2/12/15 Husband-and-wife acting duo, Joe Bologna and Renee Taylor, at Doris Bergman’s luxurious Valentine’s gifting suite and luncheon at Fig and Olive restaurant in West Hollywood. (You can read about my enlightening convo with Joe here: itsnotaboutme.tv/news/gifting-suiteevent-doris-bergmans-valentine-romance-oscar-style-lounge-party.)

2/12/15 Star of the ’70s cult classic, Vanishing Point, Barry Newman, in the audience to see classic pal Dick Cavett, star in the show Hellman v. McCarthy at Theatre 40 in Beverly Hills. (You can read my review of that play, including more about Dick Cavett, here: itsnotaboutme.tv/news/theatre-hellman-v-mccarthy.)

2/17/15 Lea Thompson getting a snack, in the lobby of the Wallis in Beverly Hills, during intermission of just a regular night at Enter Laughing, The Musical. I guess I wasn’t the only VIP who had to miss opening night! (To get clues as to why she she was there, you can read my review of the show here: itsnotaboutme.tv/news/theatre-enter-laughing-the-musical.)

2/20/15 Keith Stanfield, (whose photo is the big one at the very top,) who played a role in this year’s Selma, at the GBK gifting suite for the Oscars, at L’Ermitage in Beverly Hills. (Deets here: itsnotaboutme.tv/news/gifting-suite-gbk-oscars-suite-2015.)

2/21/15 Alec Baldwin walking down Brighton Way in Beverly Hills with his fam. This East Coast-er was probably in town for the Oscars, (or at least some of the attendant soirees,) since he starred in Still Alice with eventual Oscar winner Julianne Moore. (Photo at the beginning of this column.)

2/21/15 The fun former football-er, Willie Gault, and funny man Ken Davitian (of Borat fame,) at Debbie Durkin’s Ecoluxe Lounge for the Oscars, at the Beverly Hilton in Beverly Hills. (For more pix of them, [and maybe even moi!] please see my whole write-up here: itsnotaboutme.tv/news/gifting-suite-debbie-durkins-ecoluxe-lounge-for-the-oscars-2015.) 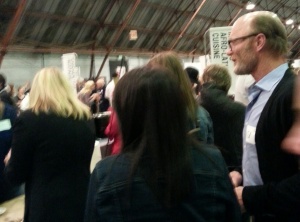 The back of Amy Madigan, on the right, and Ed Harris on the left. Photo by Karen Salkin.

2/21/15 Khandi Alexander at opening night of The Price, in downtown L.A.’s Mark Taper Forum. I saw fans clamoring for her autograph on her way into the theatre, but, because I don’t watch Scandal, I had no idea who it was. My trusty sidekick had to let me in on just how popular Khandi is to those viewers, which might include a lot of you! (You can read my cathartic review of this classic play here: itsnotaboutme.tv/news/theatre-the-price.) 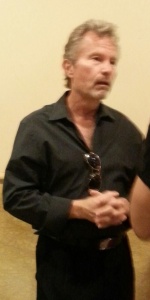 3/5/15 Acting couple Ed Harris and Amy Madigan, at Planned Parenthood LA’s Food Fare at the Barker Hangar at Santa Monica Airport, on the very day that Harrison Ford had just crashed his plane across the street!!! (That negativity aside, you can read all about the event, [the food one, not the crash,] here: itsnotaboutme.tv/news/diningevent-planned-parenthoods-food-fare.)

3/9/15 I finished out this thirty-one-day celeb cycle by spotting (separately) excellent actor, John Savage, and comic (and former Last Comic Standing judge,) Russell Peters, at Sue Wong’s Spring fashion show, at the horrible Taglyan Complex in Hollywood. (That review is yet to come! So, please check back for it in the next couple of weeks.