Between spending the month of May mainly in New York, as many of you already know, and then staying in for much of the next two months to watch special sports, such as Wimbledon tennis and Derek Jeter’s quest for his 3,000th hit (which you can read about here, if you missed it: http://tinyurl.com/3hjwjbw,) my celebrity sightings have been few and far-between recently. And, unlike many other gossip sites, and most PR people in the biz, too, I don’t consider working actors to be “celebrities,” so I don’t include those, which I see on almost a daily basis. (Heck, I can just look around my household for that!) So, I hope you enjoy these tidbits of real celebs:

[Note: I decided to finally put my sightings in order from earliest to most recent. I can’t even remember my reasoning for doing it the other way around to begin with! ] 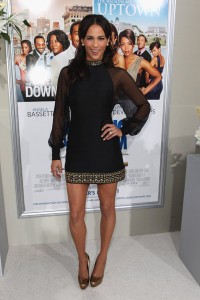 5/4/11 On the way to another event, (even I, the great “multiple-events-every-night” Karen Salkin can’t get to them all,) I passed the Jumping The Broom premiere at the Cimerama Dome, and spotted one of the stars, Paula Patton, posing on the red carpet. I had time to really watch the happening because it was causing a traffic jam on Sunset, where I was en route to a restaurant opening.

6/3/11 Lisa Leslie and Steve-O at the GBK MTV Movie Awards Suite at the SLS Hotel–not the biggest celebs in the world, but they each have their niche following. And, kind-of surprisingly to me, I had never seen either one in person before.

6/9/11 Mark Geragos, lawyer-to-the-stars (he was the original attorney for the Michael Jackson trial) in an unusual location. I can finally tell you where I spied him—in the courtroom where they were grilling me for Jury Duty! It was almost surreal. Some people have asked me why I didn’t try to get on the jury, so that I could write about it later. The answer is: because I couldn’t be quiet for eight hours a day! Shockingly, even though I just about came out and said I thought his client was was guilty, Mark‘s not the one who “thanked and excused” me–it was the prosecutor! I was shocked. I was also pretty surprised to watch him sit there texting almost the entire time that they were trying to pick a jury! Maybe he was just lining-up his next big case. After all, Lindsay Lohan’s current attorney is going to have to get tired of her legal shenanigans at some point!

6/17/11 Married actors Angela Bassett and Courtney Vance entering the Ahmanson Theatre right beside me on opening night of Les Miserables. They were actually the only celebs I saw there that night! Maybe the musical was too intellectual for the rest of them. Or too old school.

6/26/11 Debbie Allen at the opening night party for the new musical she directed and choreographed, Twist. I actually walked right past her at the show and then ate right next to her at the after-party. She looked very pleased with the whole evening. I was too, especially with Elements Kitchen’s New Orleans-style fare!