Trending
You are at:Home»BASEBALL»BREAKING NEWS/BASEBALL: JOE GIRARDI OUT AS YANKEES MANAGER!
By Karen Salkin on October 26, 2017 · BASEBALL, BREAKING NEWS

I woke up to the shocking news today that the stupid Yankees organization did not re-new Joe Girardi’s contract! That’s not firing him, per se, because his four-year contract was up now, but oh my gosh—these people are idiots!!! How could any team let this man go??? 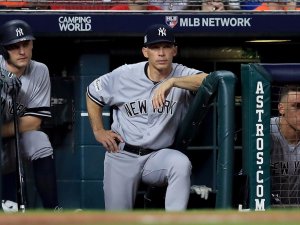 The current Yankees team was a year ahead of schedule. No one expected this mainly very young group of guys to even make the play-offs this season, but they wound-up coming one game away from getting to the World Series, for goodness sake!!! And they were so exciting along the way.

These young “baby bombers” need Joe for their development. They’re so early in their careers, and already work well with the guy, so why shake things up now? Joe Girardi is the Yankees!!! So now they’re going to bring in some stranger to work with these young guys? How insane is that decision??? 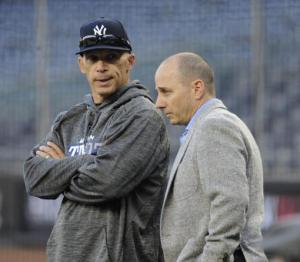 I’m sure this was all Yankees General Manager Brian Cashman’s idea, although I can’t for the life of me figure out why. What does he have against Joe? Here’s his disgusting, pat, full-of-baloney statement on the issue:

“I want to thank Joe for his ten years of hard work and service to this organization. Everything this organization does is done with careful and thorough consideration, and we’ve decided to pursue alternatives for the managerial position. As Hal Steinbrenner and I mentioned to Joe directly this week, he has been a tremendous Yankee on the field and away from it, as a player, coach, and manager. He has a tireless work ethic, and put his heart into every game he managed over the last decade. He should take great pride in our accomplishments during his tenure, and I wish Joe and his family nothing but success and happiness in the future.” 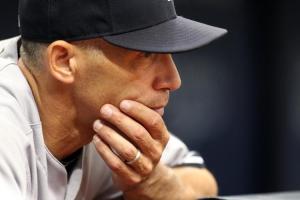 Joe Girardi, looking lile he might have known what was coming in this pic. But look at his gorgeous hands!!!

Yeah—unless he manages against the Yanks, which he’s sure to do! Of course he will because another team is sure to snap him right up! As I wrote this morning across my social media platforms, I predict the Nationals will grab him! (God forbid the Red Sox do!!! And yes, I did bite my tongue as I typed that last sentence!)

Wait—I just had a thought—maybe new Miami Marlins owner, Derek Jeter, will hire him now, since he already said they may be shaking things up down there! And Joe managed them already, very well, I might add, in 2006. Wow–Joe Girardi and Giancarlo Stanton on one team would be awesome! (Assuming they keep Gio, of course, which I have a feeling will not be the case.) Okay, let’s just wait and see how things work out next season, for everyone. (But I still hate the Yanks for nixing Joe, no matter what!)

Okay, there’s one thing that I just thought of, that I hate saying, but here goes. Joe hasn’t looked very healthy recently, so maybe he should take some time off now, anyway, to take care of whatever is ailing him, if it’s something health-wise. Maybe it’s just the stress of the season, and his job or maybe what he thought were upcoming contract negotiations, that was affecting his looks, and it’s not a physical malady. That’s what I hope, anyway.

And, of course, I wish him the best always. (Except not against my beloved Yanks. Duh.)

New thought: Just who will the Yankees hire as the new manager? They need someone established yet young enough to connect with this very young team. I feel like they’ll be looking for a Latino, but I think they may go after former Red Sox (vomit, again,) manager John Farrell. What do you guys think?

I have more to say on this topic, but I need a minute to gather my thoughts. So, try to check back here a bit later on to see if I added to it. And this would be a good time to follow me on Twitter (@MajorCelebrity) and Facebook (Its Not About Me TV) because I’m sure I’ll be venting there all day today. And actually for the rest of the year about this one!!!