Regular readers are aware that I love all things Burke Williams. So, when this iconic spa opened their new West Hollywood location on LaBrea, (they were previously on Sunset,) you know there was no chance that I would miss their launch soirée! 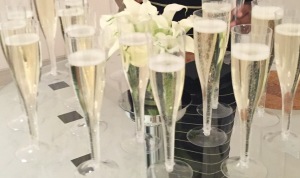 The entrance. Photo by Karen Salkin.

Hillary and I went over for an uber-relaxing evening, which just got better and better as it went along. Champagne was flowing all night, along with little classy dessert tidbits. It was all so elegant that I was glad I hadn’t showed up in one of my many “yes-I-know-it’s-too-short” mini-dresses!

You never know what you’re going to find at each Burke Williams event, except for fun throughout. They always surprise us with different services and treats each time. I just go prepared for anything. (And always shave my legs beforehand, just in case.) 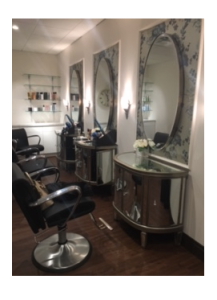 First up, we visited the hair salon for shampoos and blow-outs. While Magaly Marin worked a hip style on Hill, Eddie Lee, (who’s a Little Richard doppelgänger, even though he’s too young to have even heard of him before!,) worked really hard to make my long straight tresses look just naturally flowing. We had such a good time in there! And when I got home, Mr. X even noticed that my hair was a bit more bouncy than usual!

Then we both got mini-facials, the details of which surprised us. They were incredibly informative for being labeled “mini.” These were no “cleanser, moisturizer, and thanks for coming” treatments. They were both actually very thoughtful. Farah Bazzy did Hillary’s, and she was positively glowing after! Melka Tinkel worked on my tired visage, and could not have been more knowledgable or caring. I’m always confused as to just how many products to use on my face and neck, (and when and in what order,) and Melka volunteered all that info. I was so glad because I would never have thought to inquire! 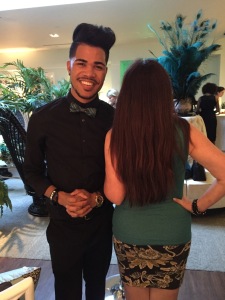 Eddie Lee, showing off Karen’s Salkin’s hair that he had just styled. Photo by Hillary Clark.

We then retired to the “Conservatory,” (which is the big picture at the top,) which is the peaceful communal area, from which the treatment and locker rooms, and hair salon, emanate. (Do you think the designer is a fan of Clue?) That’s where those who wanted a mini hand, leg and foot, or neck and shoulder massage, received one. All the treatments were overseen with kindness and efficiency by Rebecca Augustus, to keep everything running smoothly and all the guests happy. No cat-fighting here about whose turn it was, which was a pleasure at an event! (You have no idea.)

While Hillary sat this one out, (mingling with the mostly female assemblage instead,) I received a fabulous foot and leg massage from Shamir Amdur. I was almost as happy to learn his family history as I was to be getting a fabulous massage from him. (He didn’t volunteer it, by the way—I grilled him, of course! Have you met me???) 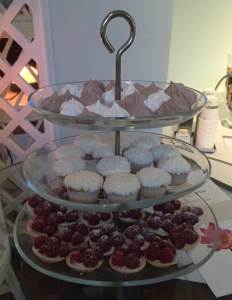 We finished-up at the Custom Bar. Hill said it was “cool because you selected your fragrances and ‘actives’ based on your intentions and moods. A computerized selection system queried your intentions and used an algorithm to determine the perfect blend based on your responses.” Wow—she’s good, isn’t she? I just basically hit some buttons on the screen, and answered “bath salts, please,” when asked if I wanted them, a scrub, or a lotion. I knew it was more involved than that, but, remember, I had just had a leg massage, which means I was too relaxed for any thought processes at that point.

As we left, we each got a little mess gift bag, which contained certificates to do it all again! So now my only decision is: before or after my upcoming hard-on-my-entire-being trip to New York?!