Trending
You are at:Home»BASKETBALL»BASKETBALL/SPORTS: NBA DRAFT 2015
By Karen Salkin on June 30, 2015 · BASKETBALL

I completed my obsessive NBA season with the always-interesting NBA Draft last week.  (But first, I checked-out my impressions of what happened at last year’s.  If you, too, want to see how I did, just click here:  itsnotaboutme.tv/news/sports-thoughts-nba-draft-2014.)

What a difference this year’s draft was from the emotion of the Isaiah Austin situation last year.  (It’s still hard for me to think about, so if you don’t know what happened then, you can read it here:  itsnotaboutme.tv/news/sports-thoughts-isaiah-austin-and-the-2014-nab-draft.) 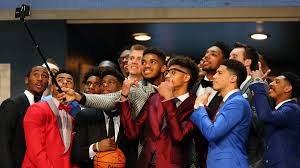 Look how happy these guys all were on draft night! And was it a portent of things to come that the guy holding the selfie stick was the very first draftee?!

The ESPN analysts called it a “high character draft,” and they were so correct! This was a lovely bunch of guys, which is rarely the case; there are always a few prospects to root against right off the bat.

Even though I watched the entire five hours of the draft, (over two days; even I can’t do it all in one sitting,) I’m offering you my thoughts on the first round only. I didn’t want to make this longer than it is. (And I didn’t even mean to comment on most of the first thirty draftees; I just did.)

I have to share two important things before I begin:

The first is that I love, love, love Emmanuel Mudiay‘s commercials!!!  Now I just may have to root for the Denver Nuggets, who drafted him with the seventh over-all pick.

Second is this–think of how many men have played in the NBA since its inception. I don’t think you’ll ever get the answer. But I’ll embed it somewhere amongst the paragraphs below! So, keep reading, and you’ll find it. And—prepare to be floored!

So, here are my thoughts on the 2015 NBA Draft, in chronological order: 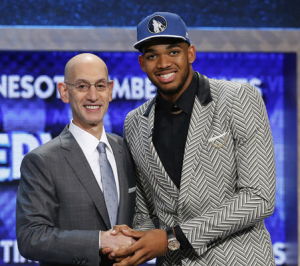 #1 pick, Karl-Anthony Townes, (who’s still a teen-ager!,) could not have spoken better, nicer, or more intelligently.  He explained the draft sitch perfectly.

And I love that his dad told him to hug his mom first.  That was so great.  I’m happy for Karl-Anthony and his fam.

D’Angelo Russell reminds me a bit of Steph Curry.  Maybe I’ll even finally like the Lakers when Kobe retires.  Just maybe.

As excited as I always am about the draft, I’m equally crushed for the sixty or so current players who will have to be dropped.

NBA Commissioner Adam Silver appears to be an okay guy. 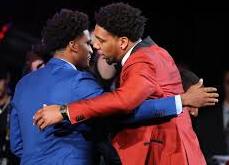 Duke players Justise Winslow and Jahlil Okafor, who were both drafted in the Top 10.

I’m so happy for third pick Jahlil Okafor and his fun fam, especially his dad, Chuck. (Jahlil lost his mother when he was nine, which I can’t even imagine. But this one tiny thing warmed my heart for him on draft night—they kept showing a home video of him when he was a baby, and you can hear his mother’s loving laugh, watching him. I’m so glad he has that sound of her voice for the rest of his life.)

Growing up a Knicks fan, I’m ashamed of the ones in the stands who booed Kristaps (Kris) Porzingas.  How would they like it if someone ruined their big moment like that?!  Shameful.

Stanley Johnson was the first (of only two) who was a bit full of himself.  He said he’s the best player in the draft.

I’m happy for Frank Kaminsky to go as high as eighth.

Justise Winslow, (perhaps the best-looking guy in the room,) went ninth, and said the night was great because he got to see them all living their dream, rather than saying he was sweating it.

As cute as Devon Booker is, his dad is even better-looking! 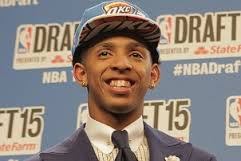 Has anyone seen Cameron Payne and John Turturro together?  Or is Cam the son of Turturro and Anthony Davis? (That’s what Mr. X and I always say to describe what people look like.)  He may do well in the pro league because his coach, Billy Donovan, just came out of college, too.  Adam Silver seemed particularly happy to greet him.

Kelly Oubre, Jr. was the other one I found just a tad disappointing. When asked if he had heard what team he was winding-up at after a possible trade, he said, “Whoever gets me is getting a jewel.”  I don’t know if that’s funny or will be accurate.

I was really rooting for Sam Dekker from runner-up Wisconsin.  I’m so relieved for him.  And I think the Rockets are the perfect team for him.  (I love that Frank Kaminsky’s parents were right there, looking as happy for him as they were earlier for their own son.)  When the interviewer pointed-out that he’s never lived anywhere but Wisconsin his whole life, and now he’ll be in hot Houston, by saying, “You can probably throw-out some of those coats,” Sam laughingly  (and politely with that second word,) said, “Thank gosh!”

I think Sam will grow into his teen looks in a year or two.

By this point, I was really rooting for Jerian Grant and Pat Connaughton from Notre Dame, and especially for RJ Hunter.

No one ran up there as fast, or with as much pep, as Jerian Grant.  And I love that he finished college, despite the fact that his entire male fam, (dad, uncle, and bro) all went pro without graduating.  I’m so glad he got drafted in the first round.  And I love those dimples!  [Fun note: In the late ’80s, his dad, Harvey, and uncle, Horace, (who are twins,) got drafted in consecutive years. And now Jerian and his brother, Jerami, just did the same thing! I told you it was fun!]

Bobby Portis, at #22, said the right things, for me.   He said he’s happy to learn from the Bulls veterans, and maybe even try to start, not how lucky they are to have him.  Great attitude!

The analyst panel. Jalen Rose is second from the left.

Analyst Jalen Rose has really grown on me recently.  He put me over the top by declaring his love for RJ Hunter as a person, (he’s known him since he was a kid,) and saying Kevin Love was leaving Cleveland the day before anyone knew.

I loved that the many Knicks fans who were on-hand (because the draft was held in near-by Brooklyn’s Barclay Center, which I’m always proud to say I saw being built,) went nuts when the Jerian Grant trade was announced.  That must have made Jerian and his fam feel great.

As far as I was concerned, Tyus Jones, (the MOP of this year’s NCAA Championship) was the big winner by being drafted to play with LeBron James at Cleveland, and he wasn’t even in the arena!  (He was  having his own party at home.  I don’t know if he was invited to the big event or not.)  [Update:  He may already be traded.]

That reminds me—I never really know who is and who is not invited to be part of the “green room,” with their fams, and who just chose, for whatever reason, to not be there.

My favorite team, the San Antonio Spurs, took a guy I never heard of, Nikola Milutinov, from Serbia.  I was praying it would be my favorite college player, RJ Hunter, but the Spurs have always been known for their international personnel, so this guy should fit right in. (No wonder their great coach never says much—he can’t speak that many languages!)

I love that RJ Hunter went in the first round, but I was hoping that, after he waited so long to be taken (three from the end of the round,) he’d go last in it, to the Champion Golden State Warriors.  Or my hometown Brooklyn Nets, with the penultimate choice.  Oh well.  I wish him luck in Boston.  (I was so disappointed he wasn’t on hand, because I wanted to see his colorful dad, Ron, go to pieces.)

I’m happy for twenty-ninth pick Chris McCullough, who took himself to the event, (after not being officially invited,) and sat in the stands.  He said he’s happy to be a Brooklyn Net now because he’s a Bronx boy.  It’s good when you’re that young to stay close to home.  And I say that your peeps can come see you play all the time!

Even though the final first round pick, Kevin Looney, is from my favorite school, UCLA, (whose 1995 Championship team became my friends the following  year,) I don’t know much about him.  Except that he’s a lucky guy to be drafted by the Champion Warriors!

Okay, I almost forgot—here’s the answer to the question near the top: Jalen Rose stated that only 3,988 players have played in an NBA basketball game! Ever! I absolutely can’t believe that’s all there have been, but I checked the info, and he is correct. So the new season will make it only over 4,000. Are you as amazed as I am?! (You can tell me in the comments below.)