Trending
You are at:Home»BASKETBALL»BASKETBALL/KAREN’S RANT: WHY I DETEST THE CREEPY CLIPPERS!!! (HERE’S ONE CLUE: MARCUS MORRIS!)
By Karen Salkin on September 2, 2020 · BASKETBALL, KAREN'S RANTS

WHY I DETEST THE CREEPY CLIPPERS!!! (HERE’S ONE CLUE: MARCUS MORRIS!)

It’s very odd that I, who loves Los Angeles like few others do, would root for a team from Texas over one from my own beloved city. But I now loathe the LA Clippers with a blinding passion!

I’m not overstating the case even one iota. I couldn’t even sleep the night of the incident I’m about to describe, because it upset me so much. And that the league did nothing about it just makes me even more sick. 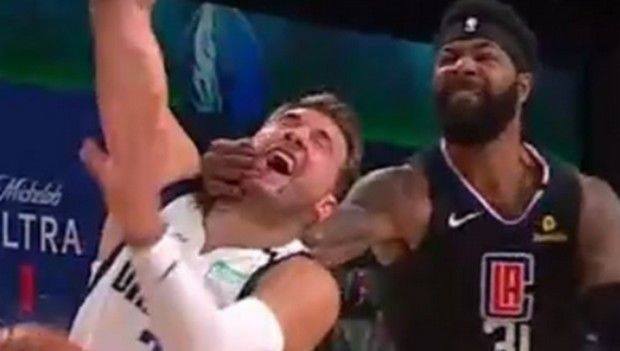 Scumbag Marcus Morris, on the right, grabbing Luka Doncic, on the left. You can see on Morris’ face how hard he was trying to harm Luka!

Actually, it made me be done with both one of my perennial favorite coaches along with the only local news channel* I ever watch. Or shall I more correctly say “watched.”

Just as I was writing a little tribute to Clippers Coach Doc Rivers the other day, (saying he was the hero of the week with his little speech against racism,) his scummy player, Marcus Morris, hit the Dallas Mavericks’ star, Luka Doncic, in the head! Hard! Twice! It was awful. Not only was it one of the dirtiest plays I’ve ever seen in all of sports, but it reminded me that Morris is the dirtiest player in basketball right now, perhaps even the dirtiest player I have ever seen in all my decades of loving basketball!!! He should be banned from the league, not just the playoffs. I hope his family is ashamed of him. What a horrible example for his baby son. And what an unmanly move to harm a player just because he himself cannot hold a candle to Luka, either in skill level or humanity. 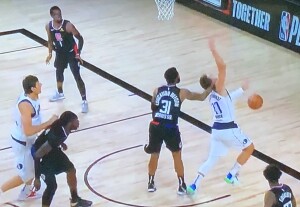 So, instead of continuing that tribute to Doc I had just begun, I changed courses to write this little piece. I lost all respect for Doc Rivers that day because he stuck up for Morris on his scumbag move! I know coaches usually have to do that, but in this case he definitely should have said something softer, like he’s sorry it happened, or it was in the heat of the moment and “I’ll talk to my player,” or something like that. But instead he lied and said that the two hits to the head and hand wrapped around Luka’s face were “just a follow-through,” which they clearly were not, and that Morris just got ejected “because he’s him.” Disgusting all the way around, which is par for the Clippers course. 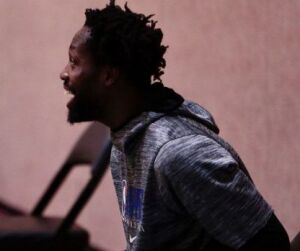 Patrick Beverley yelling at the Executive Director of the National Basketball Players Association in the NBA players’ meeting last week.

Par for the course because I realized that Morris is far from the only creepy Clipper this season. Unfortunately, there are several more: there’s reverse racist Montrezl Harrell, (who called Luka, “bitch ass white boy,” in an earlier game; you know if it had been the other way around, there would have been hell to pay for the offending player, as well there should be!); creepy Patrick Beverley, (who had the nerve to tell the woman who’s the Executive Director of the National Basketball Players Association, “I pay your salary!,” when she was helping the players through the meetings about a possible walk-out last week—lovely, right?); and flat-leaver Kawhi Leonard, whom I did like when he was on the Championship teams of the Spurs and Raptors, but he left them both, the Spurs in an absolutely disloyal way. (He just didn’t show up and didn’t let them know anything. Not nice, not to mention very, very unprofessional.)

Oh wait—I almost forgot about Lou Williams, who left the “bubble” to go home for some “personal matter, ” (which I believe is because his grandfather died,) but took that time to go to a strip club, lyingly saying the visit was because it’s his “favorite restaurant,” and not because of the naked women. Give me a break! And Joakim Noah, who continuously maligned the entire city of Cleveland when his Bulls team was losing badly to the Cavaliers in the play-offs in 2010. And that’s just a snippet of all his creepy behavior throughout the years. 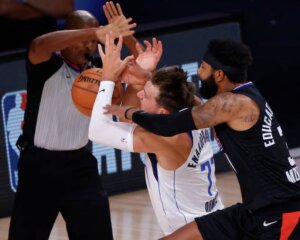 Just one aspect of the flagrant foul. This was right after Morris hit Doncic on the top of his head…twice!

I’m too involved with trying to watch every second of two major sports right now (the NBA Play-offs and the US Open tennis tourney) to write the rest of this very coherently, so I’m just going to list some of the notes I made on the night of the evil Morris incident. I was so upset that night that I got uber-depressed and was still in a funk the next day. So here are those notes, which the League Office needs to read since they took no action against rotten Morris:

In Game 1, Morris grabbed Luka around the neck, leading to the insane ejection of Luka’s teammate, Kristap Porzingis, who was just trying to protect him.

Then in one of the next three games, he pointed a “finger gun” at Luka’s injured ankle. (This was the game before he stepped on it!) The evil Morris made a basket and then “shot” Luka’s ankle in just a creepy little move.

Then in Game 5, Morris ran out of his way to step on Luka’s already-injured ankle. 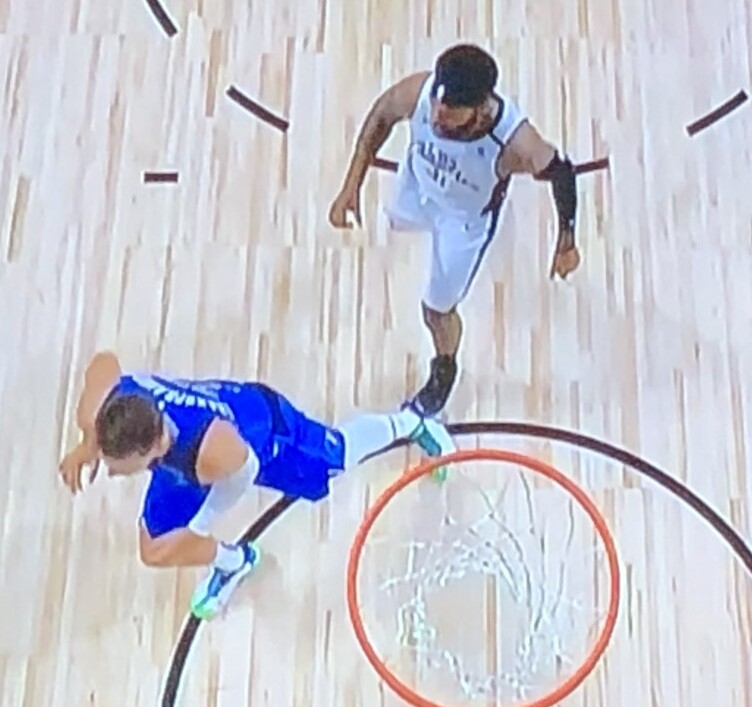 Scumbag Clipper Marcus Morris going out of his way to step on Luka Doncic’s already-injured ankle! Photo by Karen Salkin.

As if that wasn’t scummy enough, in the very next game, he hit Luka in the head twice and then grabbed him around the face, all in one play!!! I guess he just can’t get over the fact that Luka is sooooooooooooooo much better than he is! On every level.

And the league has not punished him in any way, even though Morris is not just harming the young player for a game or a series—he’s messing with his future. Luka is the game’s brightest young player, so all these physical attacks on him could have been really career-altering, (which is probably what insecure Marcus Morris was setting-out to do, anyway!)

Commentator Charles Barkley said of Morris’ latest evil move, “Man, come on man, that’s just cheap. You can’t just slap people in the head!” Then his fellow panelist, Kenny Smith expressed that he had no idea why Morris even did it, wondering “Why was he upset? I didn’t understand the reasoning, to do that.” So Chuck then explained, “They just tried to intimidate that kid, and he did not back down.” 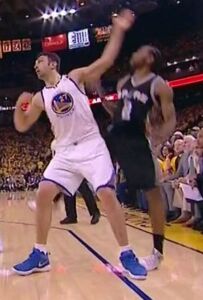 Zaza Pachouli stepping on Kawhi Leonard back in the day.

Marcus Morris’ fellow Clipper, Kawhi Leonard, experienced similar rottenness when he was a San Antonio Spur in 2017. Golden State Warrior Zaza Pachouli stepped on Kawhi’s foot, successfully taking the star out of that play-off series. That was the previous dirtiest play I had ever seen at that point, (along with ones by rotten old school Detroit Piston Bill Laimbeer.) So Kawhi better not stick up for his now-teammate on this issue.

In case it’s not clear by now, of all the things I’m upset about these days—Orange Hitler, the coronavirus pandemic, racism, riots, looters, the heatwave, people losing their jobs, etc.—nothing has my blood boiling more right now than dirty NBA player, Marcus Morris! The league really needs to do something serious about him! Pronto.

*[If you’re wondering, the only local news channel I watched up until this incident is ABC. But I’m done with them now because when reporting on Marcus Morris hitting Luka Doncic in the head, their sports guy, Rob Fuguzaki, said Luka was “acting!” I thought I had tweeted his exact sentence, but it’s not there, so I was must have been blinded by so much rage towards that moron that I never pressed “Tweet!”]