Trending
You are at:Home»BASKETBALL»BASKETBALL: THE NBA PLAY-OFFS 2020 BEGIN TODAY
By Karen Salkin on August 17, 2020 · BASKETBALL

And you know what?  I don’t really much care this year. 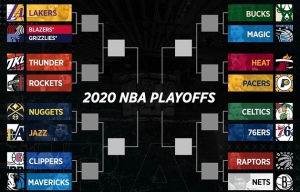 Every year for decades now, I await the NBA play-offs with bated breath. Even in the midst of my pre-pandemic always-busy glamorous life, I’ve always managed to watch every single game of the over-a-month-long play-offs. Every game, from the very first sixteen-team first round to the Final!

But like the Jazz’s Mike Conley, (who temporarily left the stupid “bubble” to see his son be born,) I just may be sitting this one out. We’ll see when it hits 10AM today which way my wind is blowing.

The conundrum for me is that in 2020, when I’ve been in my house for over five months now, I have more time than ever to watch sports. But with all the sadness in the world that has been brought on by the reason for that isolation, my heart just does not seem to be in it this year. I have about a hundredth of the concentration and rooting abilities that I’ve had my whole life up until now. 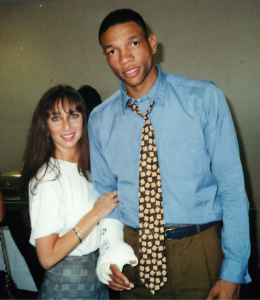 Karen Salkin and Doc Rivers. Obviously this was waaay back in the day! On both our parts! Photo by Leland Stein/Gary Montgomery.

So, assuming I do get into the basketball play-offs, for just whom will I be rooting, you may ask? I know the answer, as an LA girl through and through, should be the Lakers or the Clippers. Or both. Ever since I met him back in the say, I’ve always been a fan of the Clippers coach, Doc Rivers. And I totally appreciate the star of each team, LeBron James and Kawhi Leonard. And you know that I love the Lakers’ Dwight Howard, especially after he was so nice to me a couple of years ago.

All that being said, though, I’m still rooting for Giannis and the Bucks. I have for the past couple of years. Before that, I was basically always for the San Antonio Spurs. I feel a teensy bit sad for them right now; after an epic playoffs run of twenty-two years, (twenty-two!!! OMG!,) they finally have to sit-out this post-season. (I guess they can maybe use the rest after all those years. At least, that’s what I’m telling myself to cheer myself up.)

They’re not my team, anymore, anyway. Unlike baseball and football, where my teams are always the New York ones, I re-choose which NBA team(s) to root for each year, based on their personnel. And Giannis Antetokounmpo has been my guy for about three or four years now. And, as interesting as I find the current Lakers’ and Clippers’ rosters, and expect one of those teams to become this year’s NBA Champion, there’s just something about manufactured teams that I find off-putting. It sort-of reminds me of picking your friends in elementary school sports, instead of giving everyone a fair chance. (And no—I was not chosen last! I was surprisingly good at basketball!) 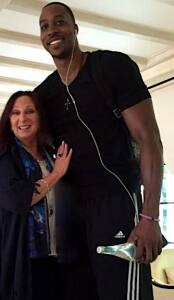 And I love that two teams who dominated the NBA Finals for four years in a row, from 2015-2018, both wound-up at the bottom of the standings—the Cleveland Cavaliers in the East, and even juicier for me, the creepy Golden State Warriors in the West. Those falls-from-grace, especially that of the Warriors, are mouthwatering to me.

You know, as I’m writing this, I think I’m talking myself into watching the play-offs after all! I’m sooo happy for the Portland Trailblazers to have made it in by winning that inane “play-in” game this week-end. And I always love their two stars, Damian Lillard and CJ McCollum. And I like both the Nuggets and the Jazz, so that series should be a really heart-tugging one for me.

So okay, I just decided—please don’t bother me for the next month or so. I’ll be channeling my pre-pandemic self and watching every game of the NBA Play-offs. I just don’t know how I’ll explain this decision to my fifty or so Perry Masons waiting on my DVR!