Trending
You are at:Home»BASKETBALL»BASKETBALL: ISAIAH THOMAS TRADE
By Karen Salkin on August 25, 2017 · BASKETBALL

I was all set with a different column for today—it was written, proofread, and drafted. But when I heard that Isaiah Thomas was traded from his beloved Boston Celtics to the Cleveland Cavaliers, I just had to weigh-in. 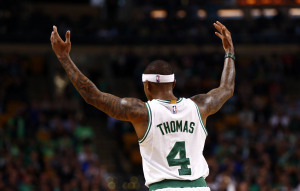 OMG!!! Isaiah Thomas IS the Boston Celtics!!! What is wrong with them??? They just traded away the face of their franchise! And for what? Kyrie Irving? Isaiah has twenty times the heart that Kyrie does. And, at just 5’9” (and I think I’m being generous with that assessment,) he has an equal amount of talent to Kyrie, in my opinion. And the famous song and video about him, The Mighty I.T.! (Here’s the link to it: www.youtube.com/watch?v=6LxoLxbFl5E.)

For me to have ever rooted for the Boston Celtics is a rarity, trust me. But I did so this year because I just love Isaiah so much. He’s what every sportsman should be. He plays his heart out, and has obvious love for his city and fans. And the sport itself. If I were choosing between Isaiah and Kyrie for my professional team, I’d for sure go with the former. (To remind you, here’s what I wrote about Isaiah in May, during his emotional and traumatic play-offs experiences: itsnotaboutme.tv/news/basketball-nba-play-offs-2017-so-far.) 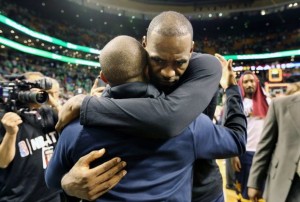 I do think (and hope!,) that he’ll be happy playing with LeBron James this upcoming season. Isaiah appears to love learning, and he never seems to think that he’s the be all and end all, so I think he’ll really thrive in a partnership with the King. But it just has to be somewhat weird to go from being the top dog on a team to being second in command. (And I have a feeling that LeBron will be gone from the Cavs the season after, so does that then move Isaiah up, or will there be more shocks in store for the 2018 season?) 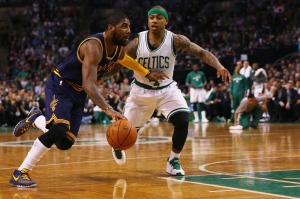 Kyrie Irving and Isaiah Thomas in their former teams’ jerseys that will now be swapped next season. So strange!

I just wish I knew how Isaiah feels about being traded. If he’s okay, then I’m okay. I’m sure he feels at least a bit betrayed, since this was not his decision at all. (As opposed to Kyrie, who’s been lobbying to be traded since the Cavs second-place season ended!) And who could blame Isaiah for feeling that way??? (If, indeed, he does.) He’s given everything to that team, including playing in the play-offs the day after his sister was killed in a car accident! He knew his team had absolutely no chance of progressing through the post-season without him, so he put his extreme misery to the side to be a true team player. He even traveled across the country to her funeral, and then back the very next morning, to be there for that day’s game. And guess what—he was the first player in the building that day!!! And these idiots trade him???

Since Isaiah is way more mentally stable than I, I have a feeling he’ll be okay with everything. He’s one professional player who realizes that his sports career is not everything. I’m so impressed with his description of himself on Twitter. Here it is: “Proud Father! If all I’m remembered for is being a good basketball player, then I’ve done a bad job with the rest of my life.” How can anyone not root for his guy?! (And his two sons are perhaps even more adorable than he is!)

So now I’m back to hating the Celtics! And back to rooting for the Cavs! I hope that all I.T. Fans will join me. Go Cavs!!!