Trending
You are at:Home»BASKETBALL»BASKETBALL: I CAN’T BELIEVE I’M WRITING THIS, BUT: MARCH MADNESS 2021!
By Karen Salkin on March 18, 2021 · BASKETBALL

Occasionally, I start my columns a little bit ahead of experiencing the event I’m writing about, thinking I’m saving myself a bit of time. (I have no idea why I think that because whether I write something on one day or another, it’s still the same amount of my time! But it somehow makes me feel better.) 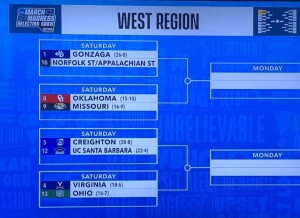 The beginning of this year’s brackets. Photo by Karen Salkin, from the TV screen, as is the one at the top of this page.

So last year at this time, I had already started work on my preview of the college basketball tournament, March Madness. I was all excited for it, as I have been for the past twenty-six years, since UCLA last won. (And fun fact: that team became my friends a year later, and invited me to all of their games!)

And then just a few days prior to the first games in 2020, all sports closed down because of Covid, and I was crushed for the young athletes, as were sports fans everywhere.

Now here we are, one year later, and it’s a brand new day. Well sort of. Some things have changed. The entire tournament will take place in and around Indianapolis, as opposed to the several host cities across the country in previous years, and there will be a very limited number of fans at each venue, mainly family members.

And the First Four games will all be played on the first day, (as opposed to the usual two,) and the rest of the schedule for the first two week-ends has moved down a day, being held from Friday to Monday instead of Thursday to Sunday. (That may be because none of them have actual classes on Monday right now!)

And this year, the venerable Duke Blue Devils and Kentucky Wildcats will not be in it for the first time since 1976! For those of you not in the know, that’s just about unheard of. (Those omissions are basically because those teams sucked this year, but also, perhaps, due a bit to some Covid cases on their campus.) And the entire Ivy League opted out, (which, trust me, is not a big loss to this tourney! Think about it.) But I give them credit for not putting themselves at risk; their superior brain power must have told them how not safe it might be to participate!

Shockingly, though, the NCAA powers-that-be made the tournament the same number of teams as always! Of course I’m happy for all the players, but that’s just crazy to me. For health safety’s sake, I feel like they should have halved them. 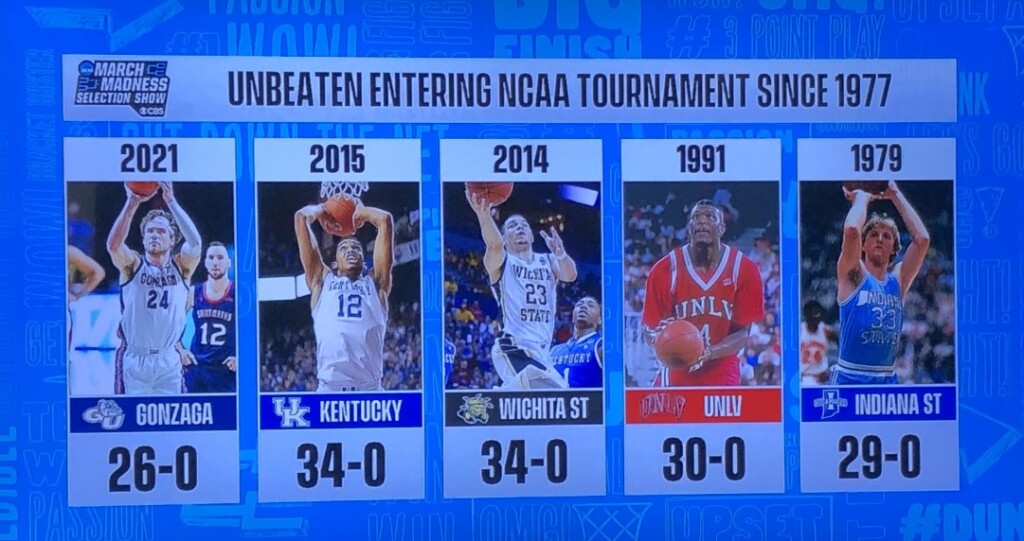 The last five undefeated teams going into the tournament, including this year’s Gonzaga. The other four did not win the Championship; I’m hoping this year turns-out to be different for the Bulldogs. Photo by Karen Salkin, from the TV screen.

There are still some fun things about March Madness 2021, chief among them being, for the first time ever, I didn’t have to juggle my sked to stay up overnight when I get home from one fabulous event or another, to get caught up on every second of the tourney, as I have done in all the previous years!!! (Yes, I do know that’s insane.) I’m ensconced in my house all the time now, anyway, until it’s really safe to live pre-pandemic life again. (But I can tell you right now—I’m staying put until after the Summer Olympics!) So watching every second of the games won’t be as much a biggie as it’s always been. (Except that, during this lockdown, I’ve become used to going to sleep at around 4AM and staying in bed until after noon, so being up and aware by 9AM will still be a struggle for me.)

Here are a few more of the positives:

~ I love that Gonzaga is the overall #1 seed this year, and are undefeated!  I’ve been rooting for them for years! [Note: But there’s a caution with that: the last team to remain undefeated, meaning that they also won the Championship, was Indiana, who went 32-0 in 1976, way before my time watching March Madness, (if it was even called that back then; I didn’t have time for a deep dive on the topic.)] 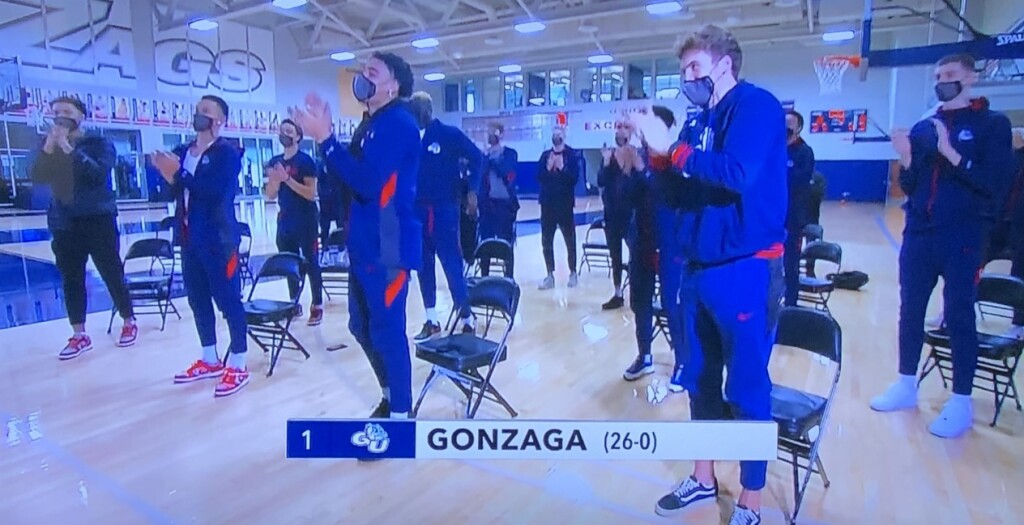 The undefeated (and I hope it stays that way) Gonzaga Bulldogs, receiving their official designation as the #1 seed overall. Photo by Karen Salkin, from the TV screen.

~ It will be interesting to see former NBA star, Juwan Howard, coaching his old college team, the Michigan Wolverines. I love full-circle stories like that!

~ I can’t wait to see one of my favorite coaches, Texas’ Shaka Smart, (with whom I share a love of quotations,) because he grew his hair out, (he used to bald,) and he’s just about unrecognizable to me now, so I need more time to study him. When Mr. X pointed him out to me recently, I honestly thought he was a student—he looks about about twenty years younger with hair!!! Who knew?!

~ I’ll be excited to hear that CBS college basketball theme music again. No lie—I’ve actually missed it! (Yes, I know I could have watched games during the season, but, even staying in the house, I’ve had not a minute to spare this entire year!) 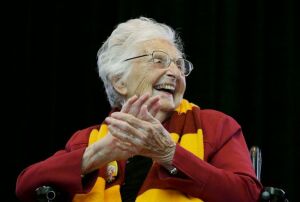 ~ But the thing I’m looking the most forward in this entire three-week tournament is…seeing Sister Jean again! For you March Madness nescients, she’s the now-one-hundred-one-year-old Chaplain for the Loyola of Chicago team, who made it to the Final Four in 2018, but haven’t been back since. And this now-famous nun is just about the most pleasant person I’ve ever seen! I would love to meet her more than almost anybody else in the world! [Note: She’s being allowed to be at the tourney because all the safety protocols have been followed. I’m so happy for her, the team, and all of us, actually—Sister Jean is who the world needs right now!]

Speaking of the Covid protocols, the players (and others in their entourage) are required to test negative for the virus for seven consecutive days, in order to play. (One tournament referee already tested positive on Monday, and he had interacted with five others, so they all had to be sent home. Shame.) I will be holding my breath for everyone during the entire tourney!

My only real disappointment right off the bat is that UCLA has to play in the First Four after a sort-of promising season that devolved at the end with a four-game losing streak. They’re playing Michigan State, which in the distant past might have been a Championship game. My how things have changed.

All that being said, I’m still looking forward to seeing these young athletes give their all. And I suspect that they will be more grateful than ever to have the privilege of playing in March Madness.

I’m happy for everyone concerned and pray they will all be safe. And may the best team win, (meaning Gonzaga!!!)